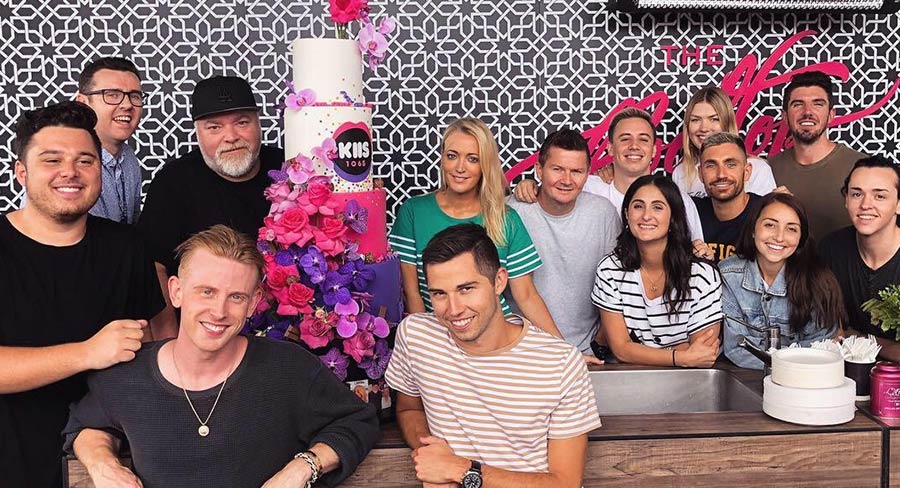 Plus: Who are the radio hosts who get an extra week’s leave?

Macquarie Sports Radio breakfast Mark Levy and Mark Riddell started including Melbourne weather reports in their updates as they returned to work today. Until the end of 2018, the duo were just available to listeners in Sydney and Brisbane on the Macquarie Media sports radio station. Now they can be heard along the east coast as they took over breakfast on the Melbourne Macquarie Sports Radio station today.

Not are they also on air in another big market, Levy and Riddell are working a little harder too – starting at 5.30am and going through until 10am.

The last hour of their show from 9am each weekday will see them joined by Jimmy Bartel who will ensure there is plenty of AFL expertise on offer for listeners.

The smallish Macquarie Sports Melbourne audience would have got a shock this morning after David Armstrong finished reading the Macquarie News and the Sydney-based broadcasters started their show.

Macquarie Media has indicated that Thompson will be staying with the station.

During the show today, Mark Levy revealed McDonald’s has come on board as a sponsor.

Elsewhere in the Melbourne market, the highest-rating Australian metro radio show, 3AW’s Ross and John, started their second week after returning on January 14.

At Fox FM, the market-leading FM breakfast show Fifi, Fev and Byron started their new year with a new intro carrying a message from the show’s sponsor – Mandalay Living.

The Triple M Hot Breakfast team was back as Eddie, Darc and Wil loaded the program with new sponsorship deals for horse racing and the Super Bowl. The program didn’t attend last year, but the trio will be heading to Atlanta shortly for a week of special Super Bowl shows. The show had some fun with their newsreader Seb Costello who was married during the holidays with Luke Darcy acting as the reception’s MC.

At SEN 1116, breakfast co-host Tim Watson was back at work, but he won’t be joined by colleague Garry Lyon until next week. Taking his place was SEN contributor, the Herald Sun’s Sam Edmund.

In Sydney the market’s highest rating breakfast program – The Alan Jones Breakfast Show – is being hosted by Steve Price until Friday this week. Jones returns to the program after the Australia Day holiday on Monday.

The market’s #1 FM breakfast show returned as The Kyle and Jackie O Show helped celebrate KIIS 1065’s fifth birthday. Jackie Henderson told listeners she had a busy break which included several trips, including one to Fiji with Roxy Jacenko.

The show went to air with recently promoted new executive producer Sonia Jahshan after Bruno Bouchet stepped down at the end of 2018. It was the first show today for new producer Tom “Draco” Whitaker who has moved across to KIIS from 2Day FM.

Jonesy and Amanda returned to WSFM, but did Jonesy look a little tired as Amanda powered through their breakfast video for listeners? Special guests on day one include Julia Morris from the jungle.

Part of the fun on KIIS this morning was a grilling the hosts gave the long-suffering Intern Pete about his suspicious frequent trips to Russia! Pete will be hoping for a less controversial start to the year after his performance at the Steve Smith press conference in March last year.

Both Sydney Southern Cross Austereo shows were out of the blocks early last week and both now feature hosts coming out of Melbourne on many days.

2Day FM has a new line-up to start the new year. Both Grant Denyer and Ed Kavalee have returned, but they are now joined, officially, by former Hit Network evening host Ash London.

At Triple M Sydney, Lawrence Mooney gets his first major radio hosting role as he hosts Moonman In The Morning. It’s a big team with Mooney being joined by former Grill Team members Gus Worland and Chris Page, plus Queensland broadcaster and recent star of The Block Jess Eva. The show spent last week making sure the audience got to know both Mooney and Eva.

Mooney, who has been a longtime member of the Triple M family with regular spots on other breakfast shows and Kennedy Molloy, might be getting paid in cash and contra. There are plenty of ads for forthcoming comedy shows.

Off the back of record ratings in 2018, Nova’s Fitzy and Wippa started the new year with the NSW premier as their first guest – Gladys Berejiklian. Show regular Dr Chris Brown was also on the line from South Africa where he is hosting I’m A Celebrity for 10.

At Mix 102.3 Adelaide, a $10,000 prize went off on Jodie and Soda’s breakfast show as a listener guessed the Secret Sound.

Quite a few changes around the dial on ABC Radio, although not anything like the start of 2018.

In Melbourne, morning announcer Jon Faine told his listeners that 2019 would be his year on air the station – his 23rd. Myf Warhurst was back at lunchtime with writer and musician Dave Warner her first guest for 2019.

ABC Radio Perth has several new presenters in 2019, starting with Barry Nicholls who will present an early-bird statewide breakfast show from 4am – 6am. Russell Woolf and Nadia Mitsopoulos take over the Perth breakfast slot from 6am – 10am.

Top Photo: Kyle and Jackie celebrate the station’s fifth birthday with their team