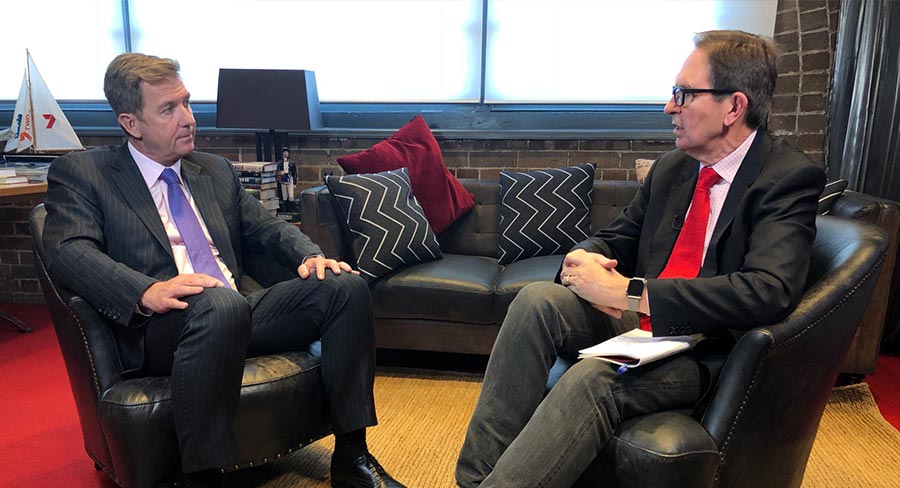 • Plus making a profit & are audiences ready for 70 days of MKR promos?

• Seven details summer of cricket coverage: Test and BBL all in one place

The share market has loved Seven’s cricket acquisition with the price lifting significantly since then.

In just that short period of time [since April 2018] live sport is becoming more and more important. Along with our own Australian content and live news it is the lifeblood of the company and that will be the case for many years to come.

You paid a lot of money – $1.18b to Cricket Australia from Seven West Media and Foxtel.

These are very big numbers, but in the fullness of time they are going to prove very, very sound deals. I am very fond of saying I’m not really sure what Ninja Warrior is going to be doing next year, but I am very sure what Collingwood v Carlton will be doing next year in the AFL. I’ve also got a pretty fair idea of what Brisbane Heat v Perth Scorchers will do in the BBL.

What we are investing in here is certainty and that is beginning to sink in. Tim Worner speaks at the announcement.

You campaigned for media law reform last year. That happened, but there hasn’t been much action yet in terms of M&A activity apart from the outdoor sector. Other CEOs tell Mediaweek and Sky News Business that everybody is talking to everybody. Is Seven West Media part of those discussions?

There are considerations going on. I would also point out we were the least enthusiastic about media reforms. We were ambivalent at best. For us we are following our strategy at Seven West Media and executing that strategy as best we can and it is really starting to deliver results now.

You have talked in the past about working with Fox Sports to make savings when it comes to presenting the cricket. You are both investing in commentary teams – are you still going to be able to save on costs?

I don’t think it feasible to share commentators. We have seen what’s possible with the AFL where we work exceptionally well with Fox Sports and that is very possibly going to happen with cricket as well. [The savings] won’t be so much in front of the camera, but certainly there are very real opportunities behind the camera in terms of the production infrastructure, in terms of content delivery and those discussions are continuing.

Can Seven West Media make a profit out of test Cricket and the Big Bash League? Some rights holders have in the past said it is a loss leader for their business. Can Kurt Burnette [Seven’s chief revenue officer] make money out of cricket?

If anyone can, Kurt and his team can. We don’t go into these deals unless we believe they are in the interests of our shareholders. We think we can make a profit out of cricket. We have so much cricket – you would have never seen any mention, not even the barest mention, of Big Bash in Nine’s cricket coverage. That’s going to be completely different on Seven. For the first time the two most popular forms of the game are on the one network.

It is a huge amount of cricket that offers huge opportunity. It also offers a huge promotional opportunity for us to cross-fertilise audiences through the two forms of the game.

Did you ever think you could possibly have cricket and tennis next summer?

Absolutely. But it got to a point where the number on the table [from Nine] was too good to refuse.

Was Tennis Australia reluctant to have the Australian Open on a multichannel?

I didn’t speak to them very much about it and it wouldn’t have worried me what they thought.

What are you going to do with what has been described as the “windfall” from Nine for the 2019 tennis?

It is a windfall and available to use as we see fit. I don’t think we will be going out and spending it for the sake of it. We are really happy with the way our back half of this year looks and we are happy with what we’ve got for the front half of next year. If we can repeat this year’s front half next year we are going to have another huge year in 2019 and we will be very hard to beat. Are you going to miss the digital rights that Fox Sports has. Will that be a problem?

It hasn’t been a problem for us with the AFL. What we don’t have is the capacity to stream actual games. But it doesn’t mean we don’t have the capacity to monetise cricket online and we have significant plans in that area. We are very respectful of the rights Fox Sports has got, but there is so much opportunity online for both forms of the game.

Cricket and My Kitchen Rules

Most sports fans thought Seven did a pretty good job covering the Australia Open. One criticism that used to pop up was the number of promos for My Kitchen Rules. With Seven screening 70+ days of cricket, Mediaweek asked Tim Worner if the audience is ready for 70+ days of My Kitchen Rules promos?

“With My Kitchen Rules going into series 10, it has worked exceptionally well. I don’t think we overdid it although there was some criticism. All I would say is, it works. The idea of actually promoting programs inside live sport is something that Seven pioneered and it is now copied around the world. We have similar plans for cricket.

“But it won’t all be My Kitchen Rules – the front of our 2019 schedule could look a bit different. We are going to have some interesting product there to showcase.”