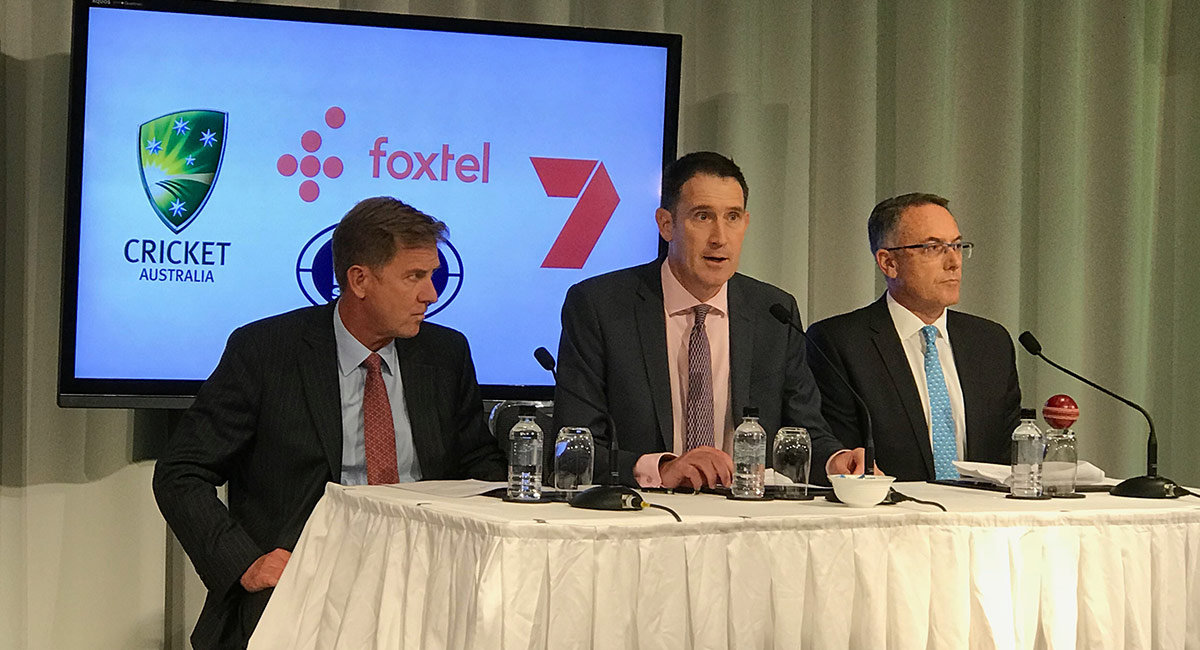 Although the results of Cricket Australia’s auction of its new cricket rights deal were revealed this morning, a formal announcement came just after 2pm Friday in a function room inside The Intercontinental Hotel in Sydney.

• Foxtel and Seven get the cricket, Nine sensationally backs out of negotiations

Each of the interested parties was accompanied by different sized entourages of PR and/or marketing executives. Among the interested onlookers in the room was News Corp Australia executive chairman Michael Miller, who just this week hosted a board meeting with visits from Robert Thomson and Lachlan Murdoch.

The room was not exactly packed with sports reporters from all media platforms – there was no sign of radio producer and host Intern Pete who made such a memorable appearance at the Steve Smith press conference just two weeks ago. There were actually more cameras then reporters.

The official release from Cricket Australia reads in part:

The new six-year broadcast and digital partnership, which includes a dedicated Fox Cricket channel, will result in overall benefit to the sport worth $1.182b over six years.

Men’s International Cricket will take a new shape, with Seven and Fox Sports broadcasting all Test Matches throughout the summer. Fox Sports will exclusively broadcast Men’s Gillette One Day and T20 Internationals.

Women’s cricket has also been placed at the forefront of the partnership with all Women’s Commonwealth Bank International matches and 23 Rebel Women’s Big Bash League (WBBL) matches each season to be broadcast on Seven and Fox Sports. CA will live stream the remaining WBBL matches on cricket.com.au and the CA Live App.

Seven will broadcast 43 KFC Big Bash League matches, in what will turn the league into a full Home and Away season, while Fox Sports will broadcast 16 matches exclusively, and simulcast the remainder.

Additionally, Fox Sports will broadcast 13 JLT One Day Cup matches and the JLT Sheffield Shield Final, along with some Tour matches.

There will also be a new digital partnership between Fox Sports and CA’s digital arm, Cricket Network. This partnership will bring more content than ever to Cricket Australia Live App and cricket.com.au users.

Cricket Australia will continue to deliver broadcast-quality streaming of matches not broadcast by the two networks, including international tour matches, non-broadcast JLT One Day Cup and JLT Sheffield Shield matches, all available through cricket.com.au and the CA Live Pass. Fans will also still be able to access all the highlights they have come to enjoy through cricket.com.au and Cricket Australia Live.

The decision not to increase our initial bid for test matches was not taken lightly given Nine’s strong connection to cricket. However, when viewed through the prism of what’s the best decision for our business, it was straight forward. This is one of the situations we anticipated when we made the bid for tennis and one we are comfortable with as a business. As I said a couple of weeks ago, we must secure sports rights at the right price and terms.

“Nine is immensely proud of our decades long association between Wide World of Sports and the game of cricket in this country. Nearly every broadcast innovation in cricket was first implemented by Wide World of Sports. We wish Cricket Australia and its new broadcast partners well for the future success of the game.

“I want to single out Brent Williams and the team at Wide World of Sports who have done an amazing job with the sport of cricket continuing to drive innovation and bringing the game to tens of millions of Australians each summer.

“I have every confidence that they will be able to do the same for tennis.”