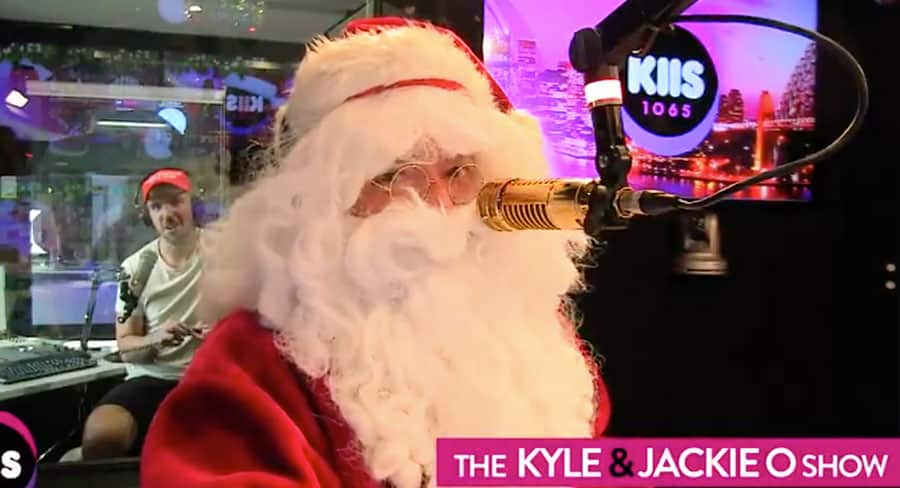 In Melbourne at 3AW Mercedes Benz giveaways marked the end of the year for some of the shows. The cars come from two different dealers who have agreements with its biggest shows – breakfast with Ross and John and morning with Neil Mitchell.

In FM radio Kyle and Jackie O presented a second consecutive live show (!) with both announcers in Sydney for their final program of the year. It was a packed program with Robbie Williams, a $10,000 version of the Pop Quiz, a visit from Santa and a performance from Samantha Jade. The shows follows a big Thursday program where the #1 Sydney FM breakfast show gave away a house, land and car package. ARN colleagues Jonesy and Amanda joined them on air after 9am.

At Triple M Melbourne it was breakup day for Eddie McGuire, Luke Darcy and Wil Anderson with Rosie. The show peaked during its final week though with a show for a live audience on Wednesday. The giveaways started early with Luke Darcy giving away fuel vouchers in the opening break. The show also spoke with the custodians of the timeslot over the next couple of weeks, Brig, Lehmo and Billy Brownless. Anderson dropped a bomb after 9am with news he was quitting the show effectively immediately. (See separate news item.)

It was the final free-cash Friday on Moonman in the Morning with Triple M Sydney’s Lawrence Mooney promising a big program to end his first year as host of the breakfast slot. He and co-host Chris Page started the show wondering about the indiscretions of the SCA HR department.

After $10,000 was given away earlier in the week, there was another pile of cash on offer this morning.

Reptile of the Year was also revealed after 8am – it went to George Pell.

The low-maintenance gem in ARN’s crown remains WSFM, even if it is now without a content director. Breakfast hosts Jonesy and Amanda started their last 2019 show with a Christmas quiz in the traditional early morning timeslot. In the final Fight for Your Flashback, Amanda chose a Mental As Anything tune to celebrate the life of Greedy Smith after the show also paid tribute to him earlier in the week.

One lucky winner is going to New York in February to see Billy Joel in addition to a $10,000 cash prize. The multi-skilled Jim Dolan put together the show’s audio highlights package

At KIIS 101.1, Jase and PJ were broadcasting a special Christmas Feel-good program from a listener’s home. The show was able to put together a package to make over the home with furniture and more plus Ford delivered an $80,000 vehicle to the family in need. The hosts had special thanks for their team including EP Alex Perigo for helping sort the amazing surprise. “See you in 2020 – we are shocked as well that we are coming back,” laughed Jase as they went off air.

Fifi, Fev and Byron also had Robbie Williams on their final Fox breakfast show of the year. It was also a year in review edition of the show, which was also an RnB Friday. The production team under Leon Sjogren put together a tune summarising the show’s year set to Cold Chisel’s Khe Sanh. The champagne cork was popped early in the show ahead of the summer break.

Melbourne’s #1 FM breakfast show had a number of giveaways and host Christian O’Connell revealed the name of the Gold Ticket winner. The breakfast show was also clearing out its prize cabinet with prize packs on offer across the morning until its 10am finish. O’Connell’s co-hosts were planning their quick getaways after the show, but Christian joked he would be recording 5-weeks of breakfast show intros later in the day. “And Easter too in case I don’t come back until then.”

On Nova 96.9 co-host Wippa was recovering from his embarrassment after Fitzy revealed this week that his “friendship” with Niall Horan was not exactly what it seemed. Wippa has been exchanging texts with the British pop star on everything from football scores to same sex marriage laws, but he found out on the show this week when Horan visited the program that the number he was texting was not his!

Robbie Williams was working the breakfast shows hard with an appearance too on Nova Sydney, calling in from Berlin.

Highlight of the last show of the year was the appearance of Vanilla Ice in the year’s final Rap Up of the Week.

Vanilla Ice flexed his rap muscles firing back with ultimate ice-cold one-liners like “Fitzy looks old, there’s no debating, To know your real age we need to do carbon dating” and “Wippa’s so old he drinks Campari & Soda, Body-hair of a Wookie and the skin of Yoda, You spend your time doing free plugs on air, But the best plugs you do are in your hair!!!”

Sarah McGilvray had to pick a winner for the Ultimate Rap Battle, but couldn’t decide – she left it to the Amazon Alexa device to decide, with the final winner crowned…Vanilla Ice.

The show’s audio producer Snitchy was in at 2am to produce a 7-minute 2019 highlights package.

The show ended with a call from Prime Minister Scott Morrison who discussed what he might be getting his wife for Christmas. The PM will also be in the audience for a Tina Arena show in Sydney next week.

At Nova’s Melbourne station Sam Pang made a rare Friday appearance as he joined Chrissie, Sam and Deano for the final show of the year. The program had a party on air with its regular contributors guesting across the morning.