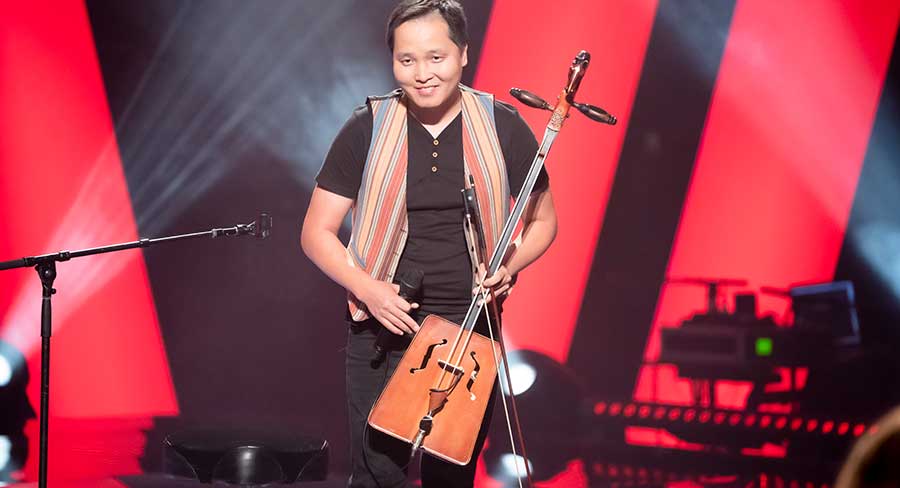 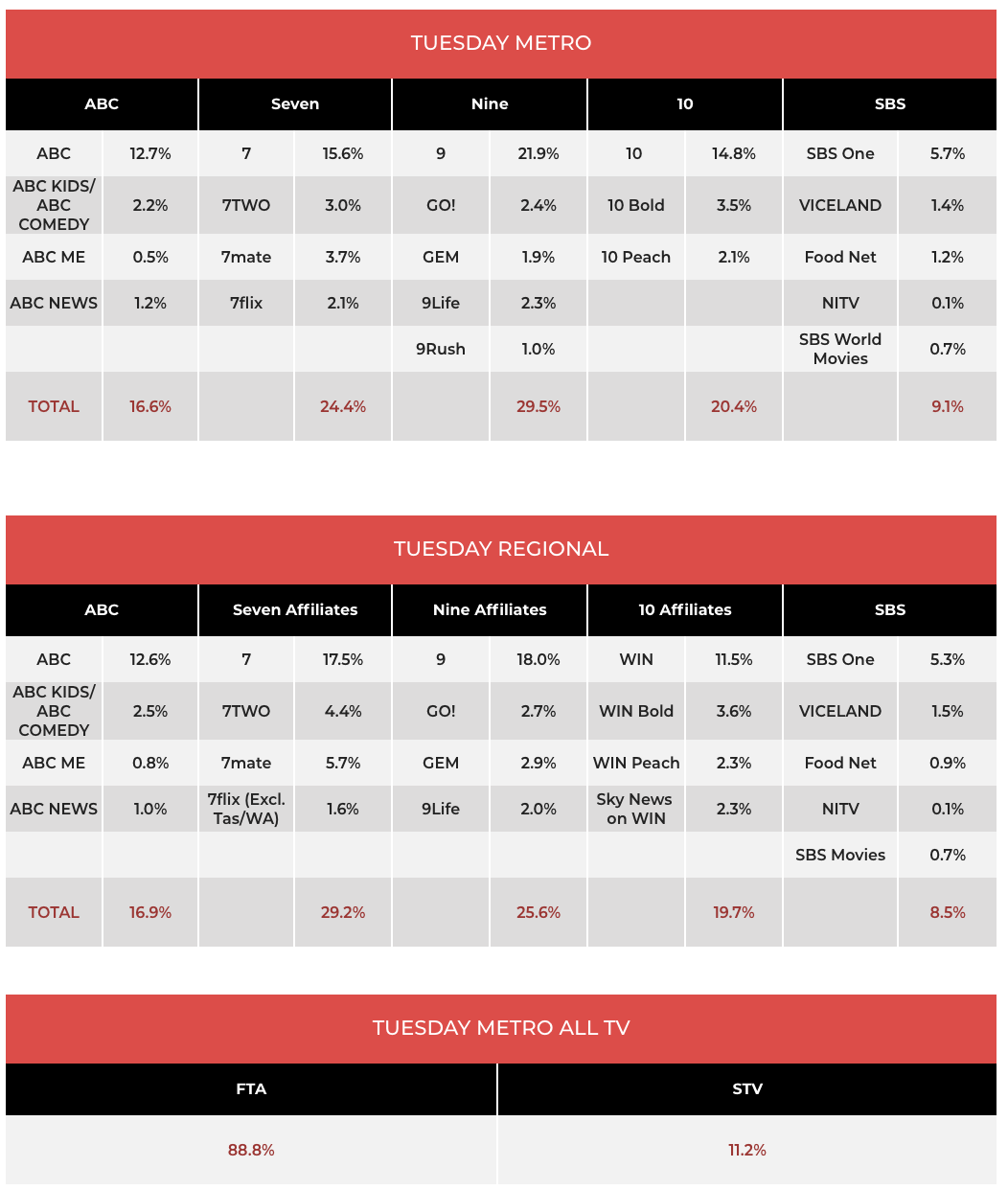 Seven: Home and Away transitioned from 678,000 on Monday to 666,000 last night.
House Rules: High Stakes moved to Tasmania where it was time for work to start on renovating the home of Tassie twins Kimmy and Rhi. After no Tuesday episode for a couple of weeks the program was on 465,000 last night.
The US thriller Absentia then continued with a double episode – 166,000 and 124,000.

Nine: A Current Affair is having close to its best start to a week this year with a second successive night over 850,000.
Jesse Teinaki returned to The Voice and managed to get all four coaches to turn their chairs – Boy George took a while, but he got there eventually. Later in the show was the moment being advertised as something you’ve never seen on The Voice before. And the episode delivered – “I originally came from Mongolia,” a performer called Bukhu explained. “It’s the last nomadic culture around the world. I’ve been living in Australia for 10 years now.” All the judges were intrigued and Guy Sebastian said he’d like to work with Bukhu in the recording studio and include him in his shows, helping to move Bukhu to select Team Guy.

A second music event followed The Voice. Monday night it was Queen, while last night it was Let’s Go Crazy: The Grammy Salute to Prince. The list of artists paying tribute on the fourth anniversary of Prince’s death ranged from rockers like Chris Martin and Dave Grohl to Mavis Staples, Earth Wind & Fire and John Legend. Prince aficionados would have been in heaven and it was a nice moment when original members (and music directors of the special) Jimmy Jam and Terry Lewis joined Morris Day and The Time onstage for medley of Prince hits. Prince didn’t have as many fans though as Queen – with 440,000 on Monday and 318,000 last night.

10: After 602,000 on Monday, The Project 7pm pushed a little higher to 633,000.
MasterChef again narrowly trailed The Voice all people, but its audience of 920,000 was made up of more viewers in key demos than the singing show had. Kirsten Tibballs arrived in the kitchen and set the four cooks vying for immunity the task of preparing her chocolate Meljito.
How To Stay Married then followed with 400,000 after 413,000 last week.

ABC: Foreign Correspondent featured an examination of England during lockdown which attracted an audience of 486,000.
Episode two of Miriam Margolyes Almost Australian saw the host travelling across Australia south to north with stops in Alice Springs and Darwin. Highlight was the host power napping at a drag show in Darwin. After launching with 573,000 a week ago, episode two was on 569,000.

SBS: After Lisa Wilkinson had an audience of 416,000 watching her episode of Who Do You Think You Are? a week ago, Bert Newton did 362,000 tracing his mother and father’s lives in Fitzroy early last century.
Jenny Brockie was then back on duty for an episode of Insight talking to vets with 200,000 watching after a Marc Fennell audience of 199,000 a week ago getting information about a better night’s sleep. 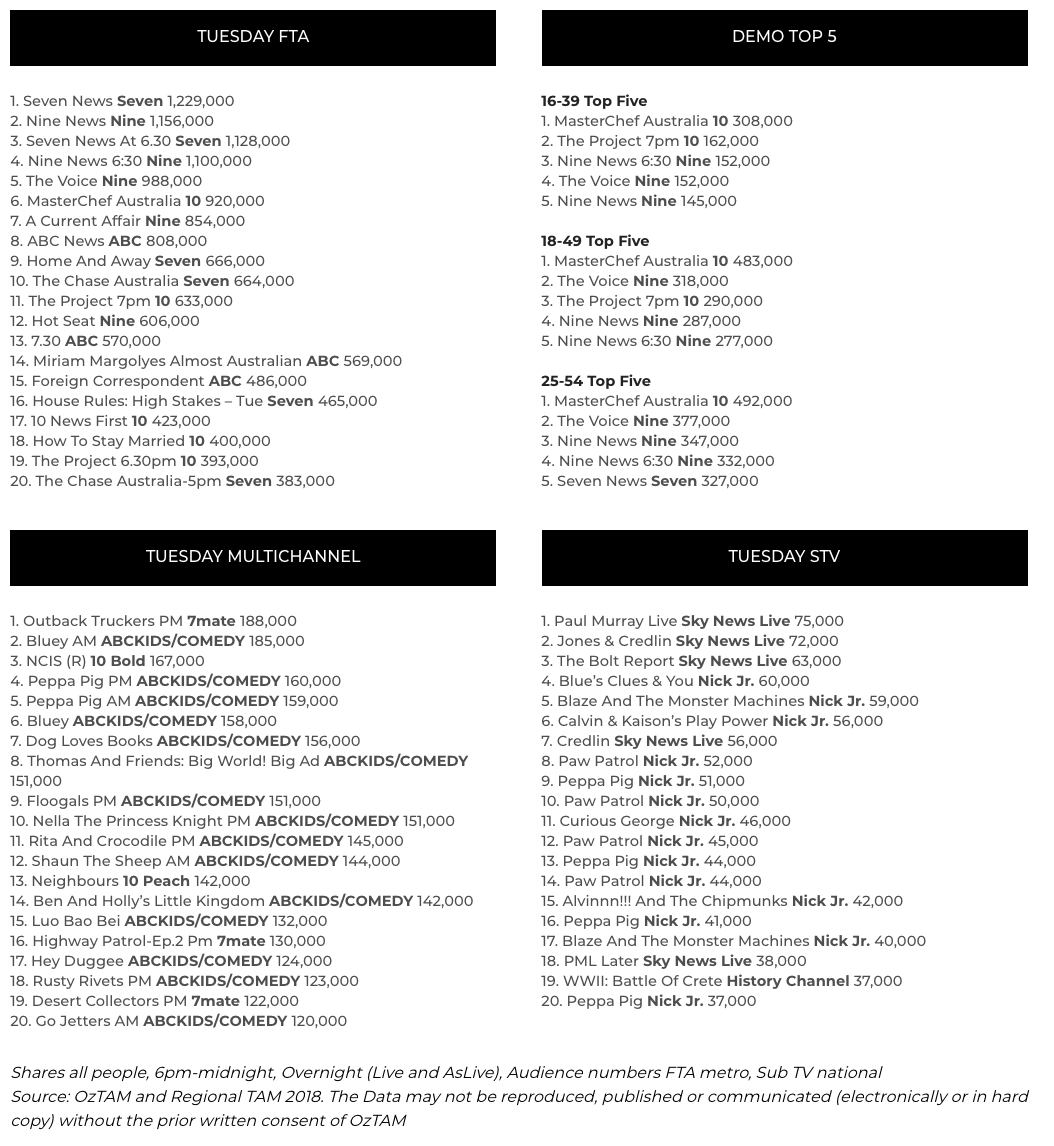