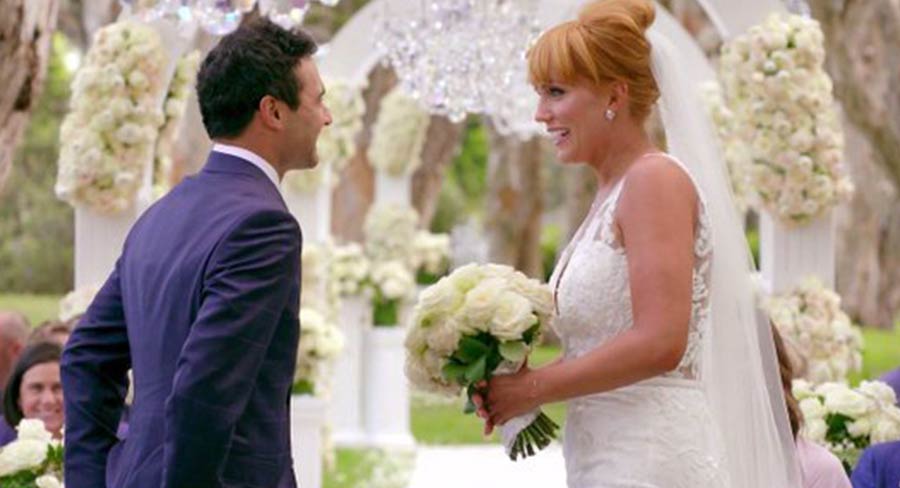 Now more than ever the first night of television after the tennis feels like the start of survey. That is still two weeks away, however last night most schedules were getting close to their best with massive interest in how the 7.30pm slot played out.

Here is a comparison on how the respective reality formats performed after 7pm (in the case of My Kitchen Rules) or 7.30pm on the respective Mondays:

Seven’s numbers look better when including regional numbers where My Kitchen Rules had a bigger audience (400,000) than Married At First Sight (318,000).

The teams on My Kitchen Rules this year include what was being labelled the show’s first “science experiment” where two complete strangers are thrown together to cook. (Not unlike how couples come together on MAFS.) First night featured Byron Bay couple Stacey and Ash.

In the 7pm soap slot, MKR won in Sydney and Melbourne, but the numbers dropped away a little in Melbourne after 7.30pm.

Seven’s most popular drama then returned with The Good Doctor on 621,000, which was enough to win the slot and push Seven’s share higher later in the evening.

Another medical drama The Resident followed on 288,000, which just trailed the average watching Nine’s movie.

A Current Affair returned after a fortnight break because of the Australian Open coverage. Reporter Chris Allen is celebrating 40 years in television this year. ACA stories last night included Reid Butler with bogan Aussies on Australia Day and then coverage of some of the couples coming to Married At First Sight. The show did 816,000 as it went head-to-head with the return of MKR.

The first episode of Married With First Sight won its timeslot and pulled a very healthy 1.0m viewers for its 2019 launch. A quick look at the reality ratings summary above will show it improved its metro audience close to 100,000 year-on-year while its reality TV competition was down year-on-year for the corresponding night in 2018.

On the first MAFS episode 10 hopeful brides and 10 nervous grooms were socialising on different sides of Sydney harbour ahead of the first of the weddings. While MKR had the longest episode, the MAFS first night ran later with its 7.30pm start.

After the reality launch, Nine went with the movie Fifty Shades Darker which drew an average audience of 314,000, winning its slot after The Good Doctor wrapped.

Guests on The Project included blogger and writer Carly Findlay, rapper and Young Australian of the year Baker Boy and SBS football pundit Craig Foster. The hour started on 203,000 and then more than doubled to 438,000 after 7pm.

I’m A Celebrity…Get Me Out Of Here! kept much of its audience with 676,000, although in the rankings the show moved from #1 in the slot to #3 as audiences piled in to watch the other reality offerings. In 10’s under 50 demo however the episode ranked #2 ahead of My Kitchen Rules.

David Attenborough’s Tasmania repeat then did 498,000.

The Ghan: Australia’s Greatest Train Journey did 99,000 first the first leg. The audience sagged a little in the middle but then lifted to 95,000 for the third instalment.

The channel subsequently had its equal lowest primary channel share in over a year.