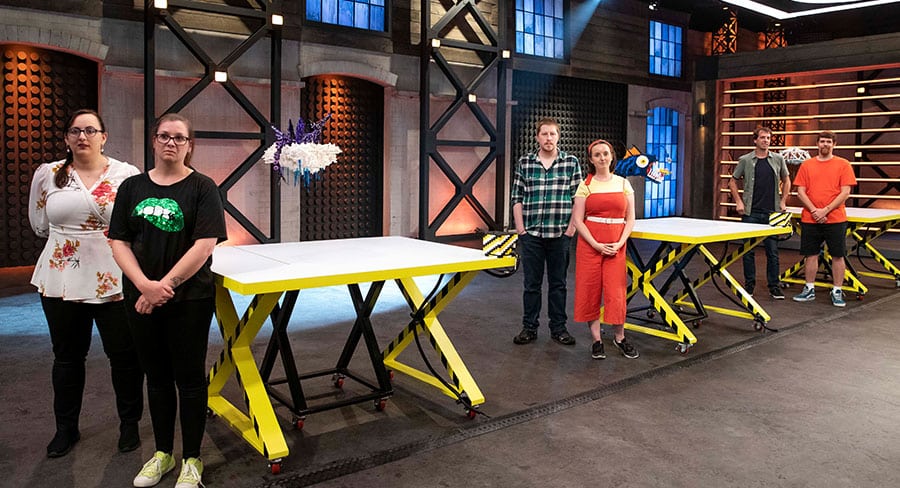 • MasterChef judges out of the kitchen, and end of road for Ben 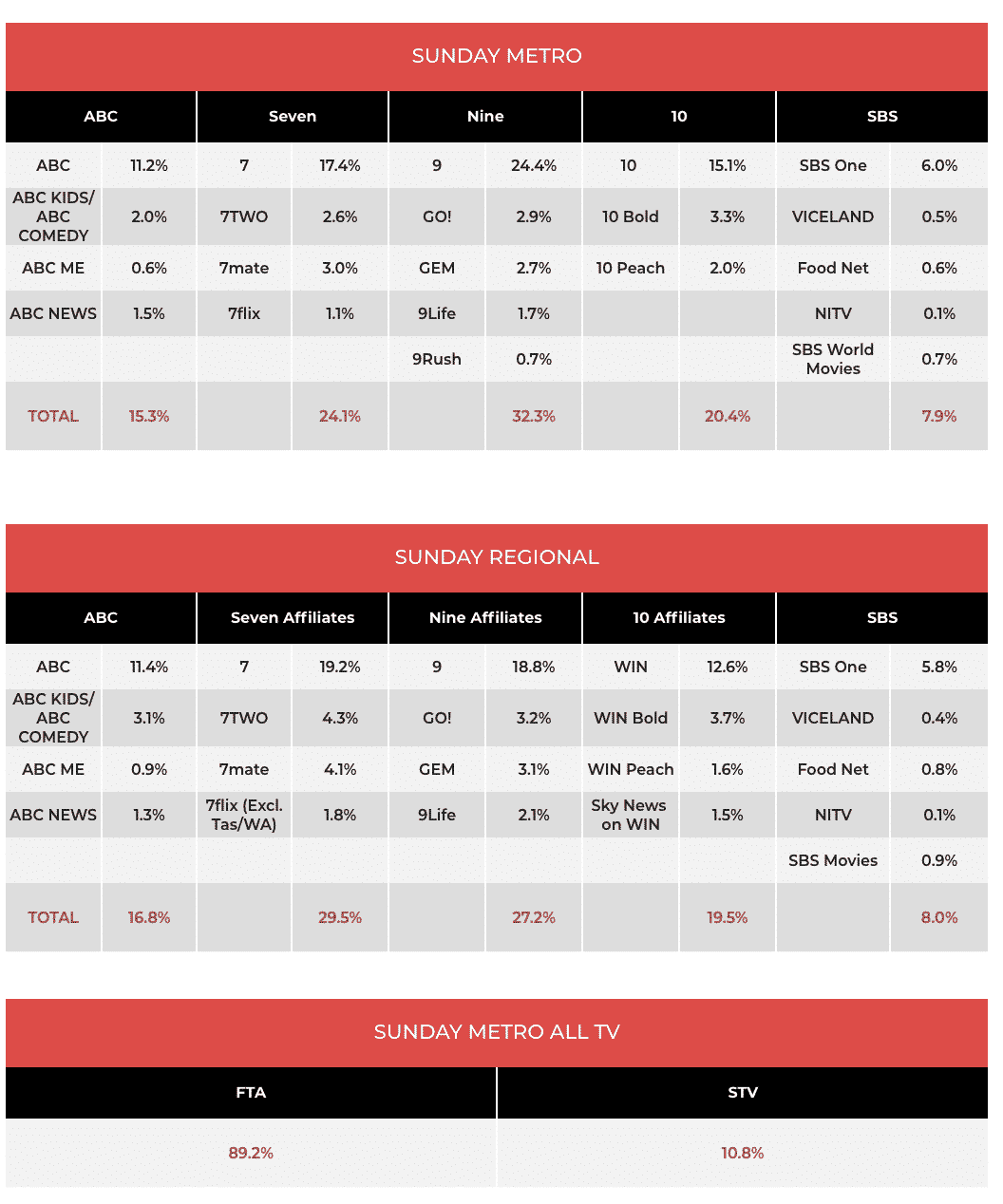 Nine: Episode four of Lego Masters saw the remaining contestants facing two challenges. The first build was to give the winner an advantage in the second build – an elimination – the second elimination in two episodes. The first challenge was to see who could build the highest structure – the first twist was the teams could only use classic narrow Lego blocks. The second twist was that no stools were allowed. Jay and Stani won the advantage with a build close to 5m high. The elimination challenge was for 10 hours with Jay and Stani getting an extra hour. The challenge was to build a structure around a piece of Lego suspended above their workstations. At the end of the build Summer, who did her build alone after Ioana retired sick, surveyed the work of her competitors and guessed she and Summer might be going home. She was right. The episode did 1.171m after 1.238m on launch a week ago.
60 Minutes followed with 629,000 after 702,000 a week ago. Stories included Liz Hayes reporting on the performance of the World Health Organisation and an update on police closing down the illegal wildlife market Liam Bartlett reported on last month.

Seven: The channel was promoting House Rules as showing the best transformation in House Rules history as Laith and George got to see their new home. The boys loved the work of Khimmy and Rhi giving them 10 for their kitchen and living room. The show’s judges cast their votes tonight. Will they be as excited as Seven’s promo team? The episode did 640,000 after 630,000 a week ago, the only episode to get close to 600,000 last week.
The locally produced crime investigation Family of Suspects then did 367,000.

10: The Sunday Project continues to improve with another episode close to 600,000 after 7pm.
Viewers got to see the new judges away from the kitchen last night which set the scene for the elimination challenge. Andy Allen was pictured alone on his balcony, while viewers saw Jock’s young child and Melissa’s husband Joe. With a list of ingredients from the judges, the contestants had to cook a delicious meal they would treat themselves to. The contestants had 75 minutes to prepare anything they liked, sweet or savoury, and whoever cooked the least impressive dish would be sent home. Reynold, Brendan and Tessa were judged as the three best dishes of the day. For Ben Milbourne, presenting overcooked salmon and an unbalanced dish sent him home. The Sunday audience was 968,000 after the previous Sunday did 1,009,000.
FBI: Most Wanted followed with 289,000.

ABC: The Virus weekly updater show followed the News with 608,000.
Grand Designs New Zealand was on 451,000.
Episode two of Mystery Road did 576,000 after launching with 651,000. During the last seven days, an extra 174,000 people watched Mystery Road, lifting the Consolidated7 audience for episode one to 825,000. The episode was also the third most-watched program on video player measurement with 116,000 over the past seven days. (Killing Eve was #1 followed by Informer 3838.)
Killing Eve episode two followed with 223,000. The FTA audience was nearly matched by the VPM audience of 195,000 for that episode which goes on iview before it hits linear TV.

SBS: The channel does good business from encore screenings on Sunday and last night its 6% share came from Scotland: Rome’s Final Frontier (291,000), Mediterranean with Simon Reeve (181,000) and The Unsung Heroes of Apollo (104,000). 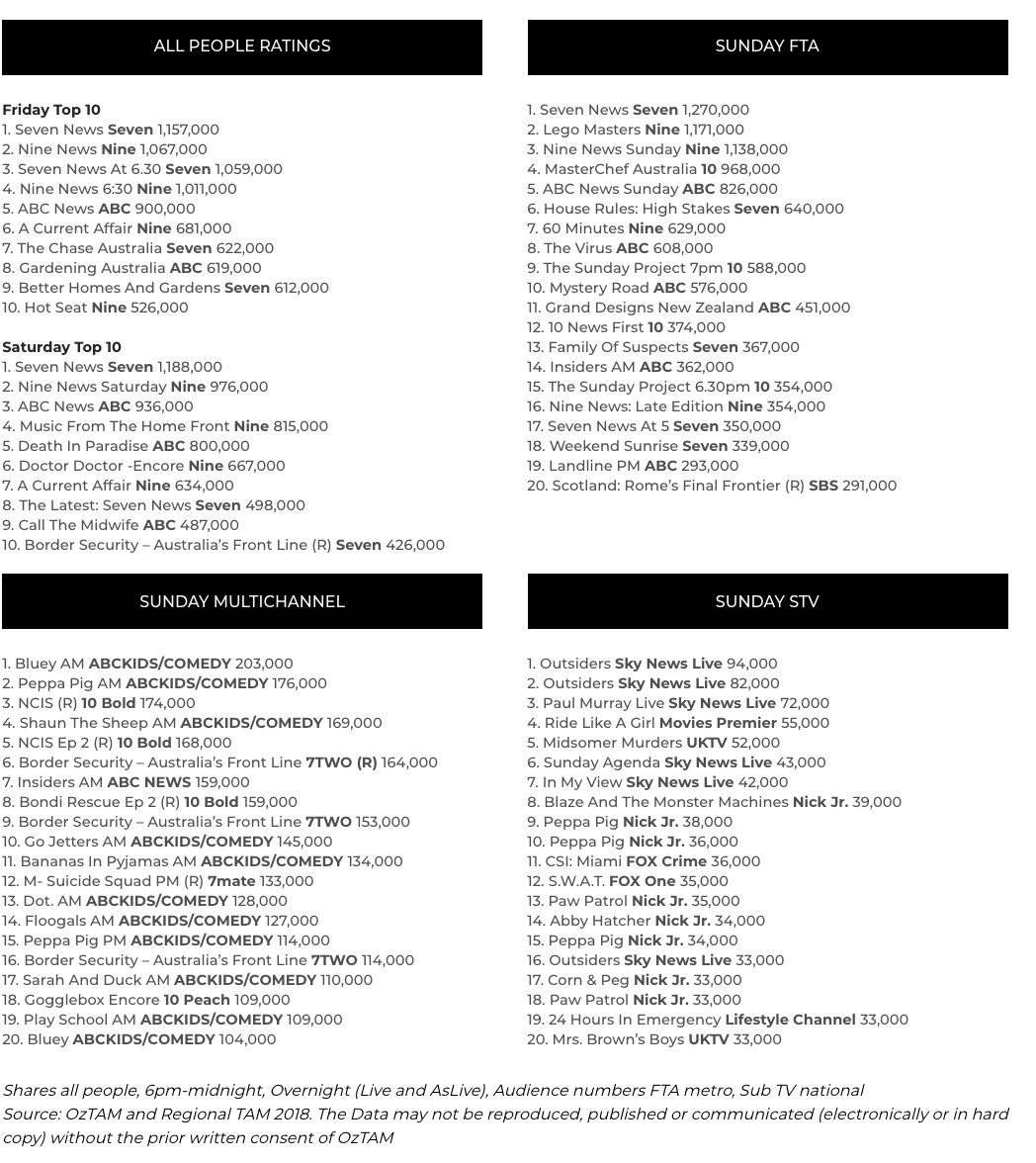