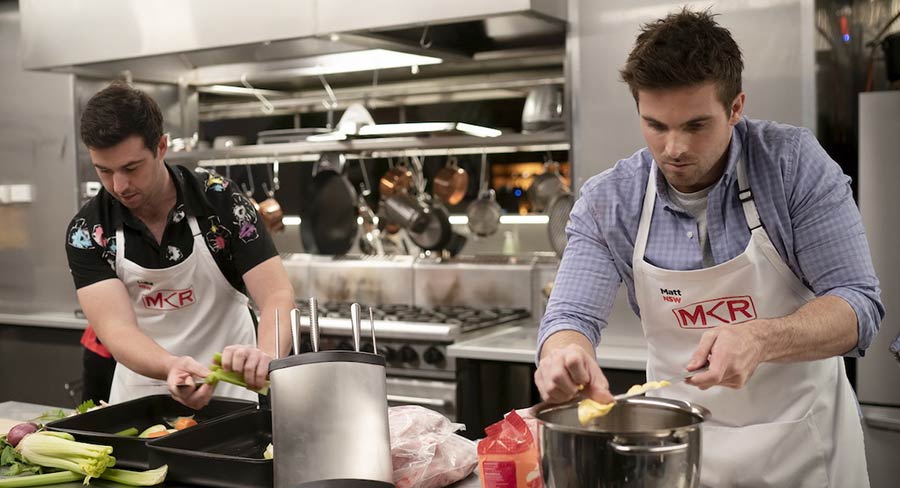 Seven’s early evening schedule with the penultimate episode of My Kitchen Rules for 2019 and the return of Andrew Denton has proven an unbeatable winning combo for the channel. My Kitchen Rules was the place to be for good food and high scores last night. It was the strongest semifinal in MKR history, including the best dessert Pete Evan’s claimed to have had in 10 years of MKR from Matt and Luke and a caramel flan from Andy and Ruby that took Colin Fassnidge to heaven! Matt and Luke’s creative, confident, modern Australian cooking just edged out the Peruvians’ showcase of culinary heritage to earn themselves a place in the 2019 grand final opposite Ibby and Romel. After the first round of judging, Andy and Ruby looked like grand finalists with a score of 57out of 60. However they were blasted off the show with five scores of 10 from the six judges. The only thing between Matt and Luke and a perfect 60 was judge Colin who gave them a nine.

(Seven has not been revealing too much about their Sunday schedule. But the first all male MKR grand final in a decade will start at 8pm Sunday after the season premiere of House Rules with new judge Jamie Durie.)

A fascinating first episode of the second season of Andrew Denton: Interview followed MKR. Special guest was Angry Anderson and his daughter Roxanne. In a prelude to the episode, Denton revealed some of the guidelines for the interview. If you tuned in late and missed that you could have been wondering exactly what they were talking about as specifics of what happened in the guests lives were not discussed. The show returned winning its timeslot with 538,000. It proved to be a big day for Denton with news that his new Interview podcast had been ranked #1 on iTunes.

Another Indiana Jones movie followed with 415,000.

Share slipped a little from Monday and Tuesday week-on-week.

The Project at 7pm delivered the second-biggest audience with 491,000 watching Peter Helliar with Christopher Pyne. It started strangely, but finished strongly. With Pyne declining to answer some of the tougher questions, 10 might be hoping he is a little more forthcoming when he guests on their election night coverage next month.

Michael Portillo was travelling through the homeland of his father, Spain, on an entertaining repeat episode of Great Continental Railway Journeys with 264,000 watching.

A repeat episode of Insight then did 238