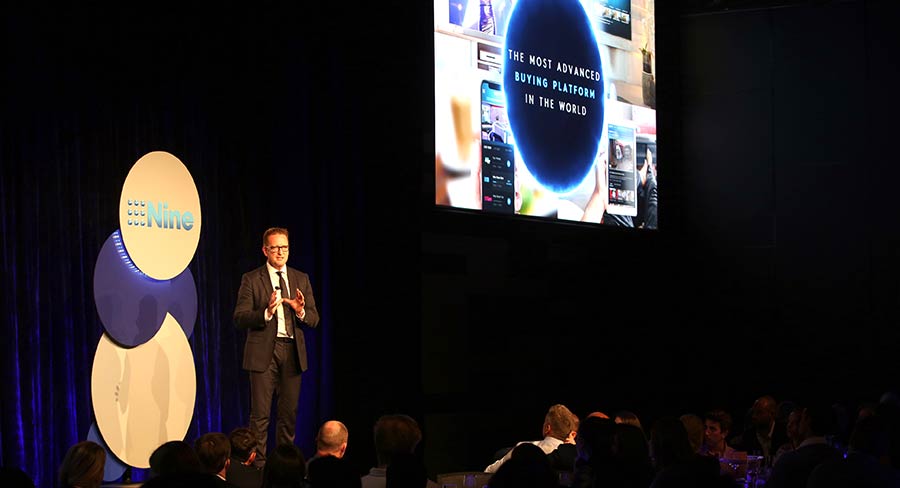 Stephenson was asked if the new-look Nine was writing more business for its new assets: “I hope so, otherwise I am in real trouble!

“Everything has gone as smoothly as it could have. When you have two significant media companies coming together there is much to do. We co-located sales teams around the country from January 7 in each metro capital.

“Stage two was completing our sales transformation which we have done. We have aligned teams in television and digital, in publishing, and we have created a new team called Nine Plus to focus on the small to medium business market and Powered is the glue that brings everything together.

“The strategies that Nine and Fairfax had are aligned. That was to create the greatest content – video, written word, journalism on news, sport or lifestyle content – and distribute that across every platform you can to aggregate the greatest number of eyeballs to engage audiences and advertisers. That is what we had both been doing independently. To bring the two companies together and accelerate that strategy has been the focus.” See also:
Melissa Hey and Michael Stephenson examine the business of TV
How new sponsors clamoured to be part of TV’s hottest property

Pitch to new advertisers from Nine

“The focus to advertisers is that they can come to Nine now and have a conversation with us about creating a marketing platform for their brands. As opposed to coming and buying advertising.

“We have proven media at the top of the funnel in television, in print, magazines plus radio. In the middle of the funnel we have our addressable advertising product with 13-14m unique IDs across the entire business from newspaper subscribers to 9Now subscribers to Domain to Stan.

“We use our performance based advertising at the bottom of the funnel to deliver sales outcomes.”

When asked if Nine was doing better with the Fairfax assets than Fairfax was achieving previously, OMD’s Melissa Hey replied: “Yes. Before they had Fairfax, Nine had a strong team selling the content and the partnerships.”

Stephenson said there had been some good cross platform success, not all initiated from the TV side. “We have a campaign coming for a brand with a foundation in Good Weekend. We have extended Good Weekend into Nine’s broadcast and the print brand will have a video and television presence.”

Does Nine having print – via newspapers and magazines – make the medium any more appealing for advertisers?

Hey: “Print is in decline and I don’t think that is going to change because consumers aren’t reading. If Nine can show in their data that people are reading, then that could mean it will be reconsidered.”

Stephenson: “We do have print revenue that is growing at Nine and I think we can do a better job with what I call proven media in the eyes of advertisers. As an industry we can do a better job of marketing, researching and proving the impact it has in terms of real sales outcomes which is a huge opportunity for ourselves and News and Seven West Media to align on communicating that much more effectively.”

Melissa Hey: “From a buying perspective on TV, 9Galaxy in market is the strongest. The other networks are still in development and not anywhere near where 9Galaxy is. That earns Nine business because it makes the process easier.”

Stephenson: “We will be launching progressively from July through until the end of the year, the ability to measure the consumption of all of our content across linear, live streaming and on demand. Inside and outside of the house on a national basis.

“That will give our media buying clients the ability to measure cross platform reach and frequency for the very first time.

“We are literally leading the world when it comes to this type of measurement.

“There will also be new audience segments – new car buyers, home loan intenders etc. As an industry we will have 40 demographics, 30 to 40 audience segments, one currency measured from one source.

“That is a real game changer. Outside of going from black and white to colour, this is the biggest change in television we have seen for many, many years.

“That is part one of the future of TV. But that doesn’t mean anything unless you have the technology to be able to buy it and sell it.

“Galaxy 2.0, which we launched in February this year, has all of our video on demand inventory – all of 9Now. Anyone in any agency can come to Nine and buy linear TV and BVOD in one transaction.”

Hey: “I’m surprised the market is softer than what we were expecting.

It was interesting seeing the out-of-home numbers year-on-year. I don’t think we will be seeing [overall] the growth of what we were expecting. We have metro TV up 1-2%. The results over the past couple of months is a sign that TV should be relatively flat.

Nine would be hoping for a bigger share and they will [get it] if they can keep their Q1 momentum going.”

Stephenson: “I have every expectation we will continue to dominate the ratings in share and thousands. None of us can control the market, but I am optimistic post-election that things can return to normal and the market settles down.

“Through challenging times comes massive opportunity for those willing to take it. We have the right assets, the right content, the right data strategy and the right technology. It is now up to us to create really big ideas for brands to leverage all of the content and the assets we have.”

Stephenson: “It is an awesome campaign, looks fantastic and is the right message. People should invest more into regional Australia and they should take that money from Facebook and Google. They should invest where they can get the best possible return on the investment.

All of the people representing the regional assets have done a brilliant job coming together and creating a platform for advertisers in another part of Australia.”

Hey: “I agree. Regional is way under invested in and has been for some time. Regional is the first to go when people are cutting budgets. This is a great campaign and it should invigorate why regional is such an important part of marketing.”