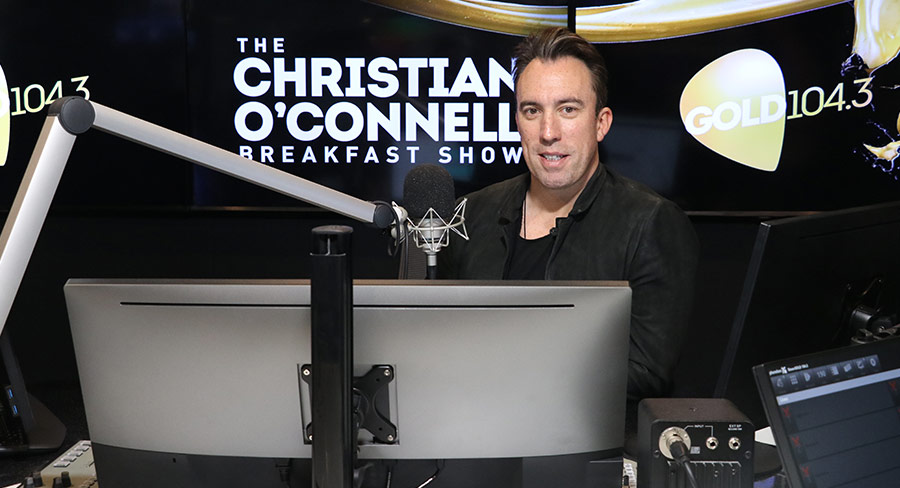 O’Connell has already started a feud with sister station KIIS 101.1

After a long countdown campaign at Gold, which was only eclipsed by the long goodbye at Absolute Radio, Christian O’Connell is finally and officially on-air at his new home Gold 104.3.

His first show went to air just two weeks after his final broadcast at Absolute Radio. He has gone from hosting seven different music streams at Bauer Media UK to handling just one at ARN.

And what a wild ride day one turned out to be, especially in the first hour.

Despite 20 years behind a breakfast radio microphone, his show lurched from one calamity to the next in what turned out to be possibly the best hour of the day.

The other revelation: O’Connell is on until 10am every day, replicating what Kyle and Jackie and Wendy and Robbie do at their respective Sydney radio stations.

O’Connell was almost apologetic when he said early in the morning: “I’m sorry about the long countdown. It’s been called a radio revolution. It’s not really – it’s just some blokes talking between the songs.”

ARN and O’Connell have replicated much of what worked for O’Connell in London. The formula is pretty simple. “There’s not a lot to this show,” said sidekick Jack Post toward the end of the show before O’Connell shut him down! The first three hours were loaded with tunes and chat and a fair amount of advertising. The final hour, as it was in London at Absolute, is less chat and more tunes.

The first three hours averaged five songs an hour while they got away a few extra in the final hour.

O’Connell’s last song on air at Absolute was “Nothing Lasts Forever” from Echo and The Bunnymen.

His first tune at Gold, after putting a call out for ideas late last week, was AC/DC’s “Long Way To The Top”.

Kudos to the Gold music team – they delivered a great mix of songs for the first show. They have set the bar high. Artists included Foo Fighters, George Michael (after four attempts to get him on air), Michael Jackson, INXS, The Rolling Stones, LRB, Tom Petty, Queen, Counting Crows, Lionel Richie, Poison, and even The Clash with the very appropriate “London Calling”.

The ageing army of former Smash Hits readers would have been thrilled too with the likes of Mel & Kim and Boom Crash Opera.

O’Connell has already started a feud with sister station KIIS 101.1. After playing Mel & Kim, he said: “Take that, KIIS”.

Just before signing off, O’Connell got a message from Triple M Melbourne’s Wil Anderson asking if he could give Eddie McGuire Christian’s phone number. Even though he was a newcomer, O’Connell indicated he knew about McGuire, likening him to Tony Soprano. “Should I watch out for a horse’s head in our bed if I am not out of town by 5pm today?” he wondered.