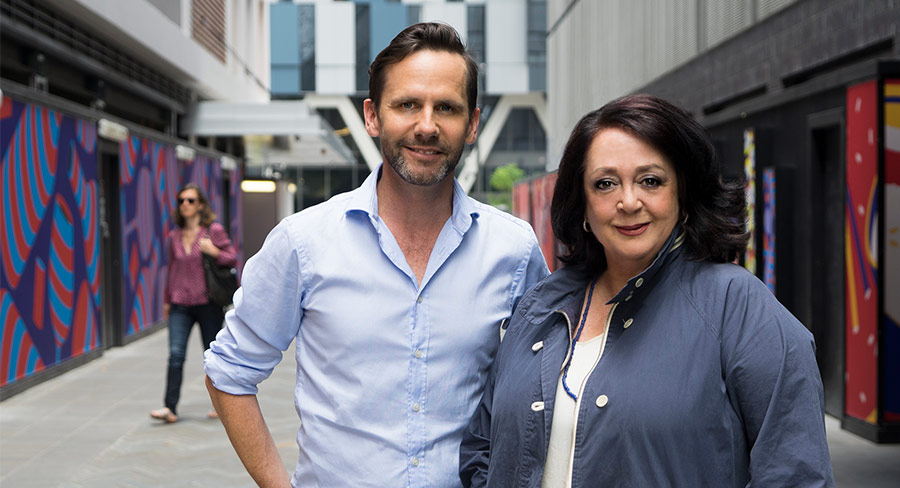 ‘The idea of a single host is almost an anachronism these days.’

ABC Radio management made some bold decisions toward the end of 2017 to refresh its major metro breakfast shows in state capitals and introduce breakfast teams to several markets.

Although it is still early days, the move has found instant success in Sydney where incumbent breakfast host Robbie Buck was teamed with morning host Wendy Harmer.

Buck is a veteran triple j announcer who moved to ABC Local radio nearly a decade ago, first hosting evenings and then moving into breakfast, taking over from Adam Spencer.

Harmer is of course a breakfast radio veteran and spent many years at 2Day FM where she enjoyed ratings success with her colleagues on The Morning Crew for over a decade.

Mediaweek visited the hosts at the ABC Ultimo HQ last week where they were guests on a Mediaweek podcast.

They weren’t sure how best to describe their new program, which runs from just after 6am through until 10am. While it is certainly a breakfast show, Harmer noted it is part brunch, something of a hybrid. Buck suggested it might be better called an early lunch.

“I’m not sure if there was much room for us if we’d said no,” laughed Harmer. “The reason to introduce double-header breakfast shows was that for people graduating to the ABC, they had grown up listening to FM radio and two or more people hosting at breakfast. The idea of a single host is almost an anachronism these days.

“That doesn’t mean we have to do chucklehead radio and eat cockroaches for State Of Origin tickets. [Laughs] Although I have done that!”

Buck: “Management came to me and said they wanted to do this format in the next couple of years – it didn’t necessarily have to be this year. I have to say working with someone else is a lot more fun.”

The breakfast hosts also talked to Mediaweek about what seems to be a campaign being waged against the ABC by some sectors of the commercial media world.

Do the breakfast hosts feel like the organisation is under siege?

Harmer: “I have noticed messages on the text line talking about things like ‘typical ABC’ or ‘fake news’. There do seem to be a lot more of them. I feel pretty confident and relaxed about what we do. We spend so much time trying to get a balance [of opinion]. We are monitoring what we do all the time.”

Buck: “There is a campaign against the ABC and it is pretty virulent at times. In some ways that can be good and you feel you are being held accountable. It can be exhausting too as you feel like you are constantly defending parts of the ABC. But we know there is overwhelming support across the country for what the ABC does from a vast majority of Australians.”

Listen to the Wendy Harmer and Robbie Buck podcast here.