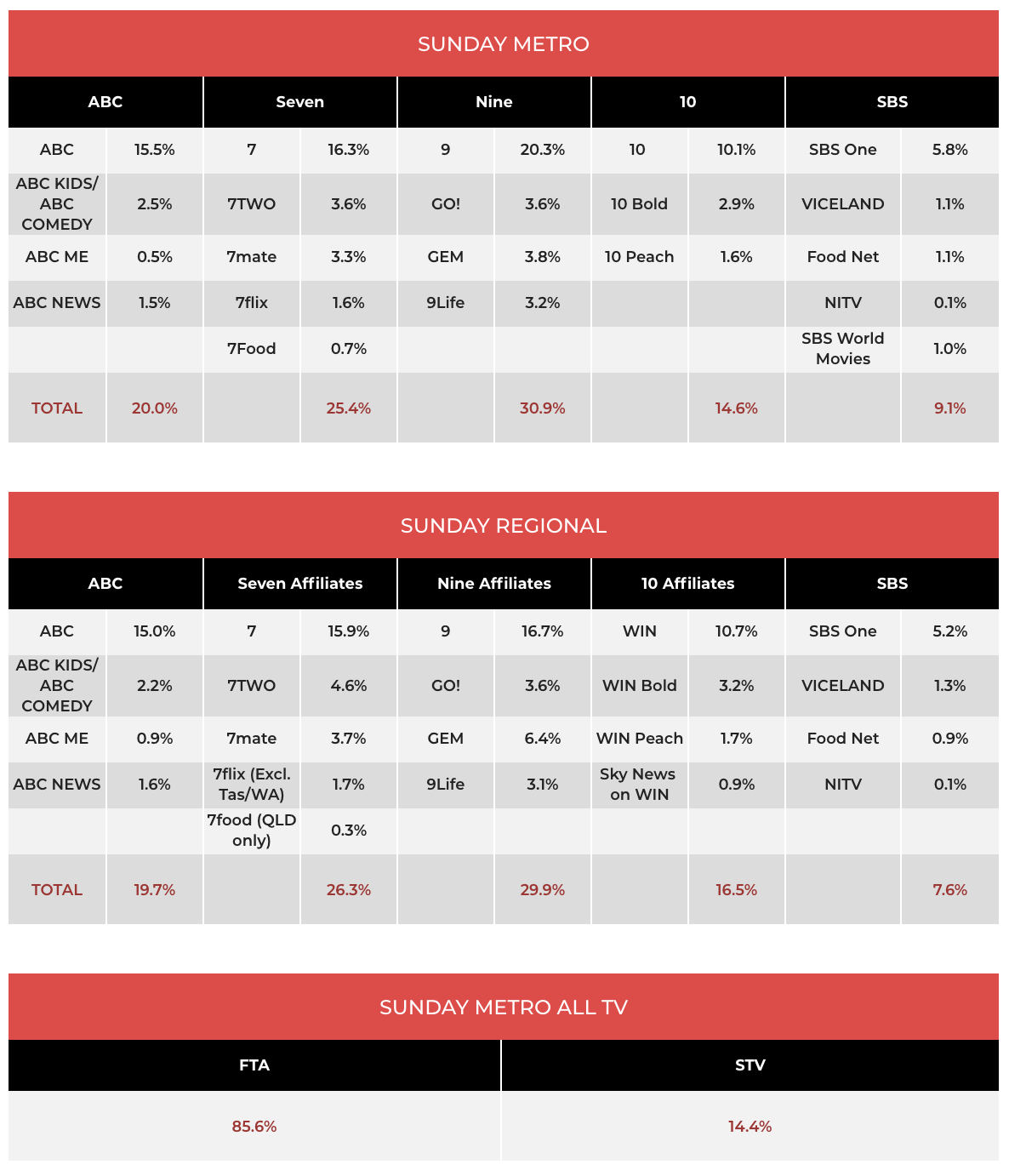 Just when it looked like Seven might not get much play on the fourth day of the First Test, Pakistan put up a fight and the game went until around 5pm. The Sunday audience started with 390,000 for the morning session. The audience peaked in the afternoon with 470,000 and then 450,000 is the preliminary number for the last session of the day which ended early with an Australian victory.

The final Sunday night of primetime survey for 2019 started with the ratings-winning Seven News Sunday on 859,000.

The second week of Zumbo’s Just Desserts started with 405,000 after the best ratings of 446,000 last week for the Sunday episode.

The last night of survey was also the last night ever of Sunday Night with host Melissa Doyle and the team. Past and present reporters recalled some of their highlights and the memories started with the first episode with Mike Munro reporting on Victorian bushfires on Black Saturday in February 2009. Among the other highlights were Alex Cullen recalling the Japanese tsunami aftermath, Steve Pennells reporting on refugees from Syria, Ross Coulthart talked about a trip to central Africa and Rahni Sadler swam with sharks in the Bahamas. The second part of the farewell episode featured some of the celebrity profiles and it was a stunning collection of guests from Charlie Sheen with Matt Doran to Lionel Ritchie with Alex Cullen, from Ed Sheeran with Angela Cox to Ricky Gervais with Rahni Sadler. Mike Willesee’s highlights included his interview with James Packer.

Hamish and Andy couldn’t quite manage the #1 entertainment show of the night with 715,000 after Perfect Holiday launched with 885,000 a week ago. The show was narrowly outrated with the ABC’s Spicks and Specks just 6,000 viewers ahead. In the episode Hamish and Andy went dogsledding on a glacier in Alaska. They also assembled a crack team of treasure hunters to find a real $5 million treasure buried somewhere in Colorado. Hamish treated Andy to a local delicacy in Kentucky and they road-tested a new pizza-delivery system while launching cars off a cliff.

60 Minutes then featured Nine publishing investigative reporter Nick McKenzie working with the TV show again with revelations about from a Chinese spy about the country’s dirty secrets. The audience of 528,000 was up marginally on last week’s 512,000.

The Sunday Project featured Lisa Wilkinson with Kim Kardashian in LA. The episode did 371,000, up 50,000 on last week.

Graham Norton then had a great lineup with Kylie Minogue, Ricky Gervais, Elizabeth Banks and Lewis Hamilton. When the discussion turned to work, Gervais noted he didn’t really have to work too hard making TV shows or doing publicity. “We are just sitting here talking shit and getting drunk,” he said. The episode was on 330,000.

The Spicks and Specks Ausmusic special featured host Adam Hills and original team captains Myf Warhurst and Alan Brough. The Spicks and Specks army were right behind it with the audience of 721,000 making it the #1 non-news program on the last night of Sunday survey for the year. Guests included Missy Higgins, Brian Mannix and Rove. The special helped the ABC to its highest Sunday survey share of the year.

A special Australian music night on the channel then featured the FTA premiere of the doco Mystify Michael Hutchence. The archival footage was stunning and the Kylie Minogue segment was a highlight. The audience was 418,000.

Secrets of the Railway was in Norway looking at the frozen Nordland Railway which was the northernmost line in the world after it was built. The episode did 212,000 after 262,000 last week where it was SBS’s most-watched show of week 47.

Both parts of the two-part doco Einstein and Hawking: Masters of the Universe followed with an average audience of 180,000 for both. 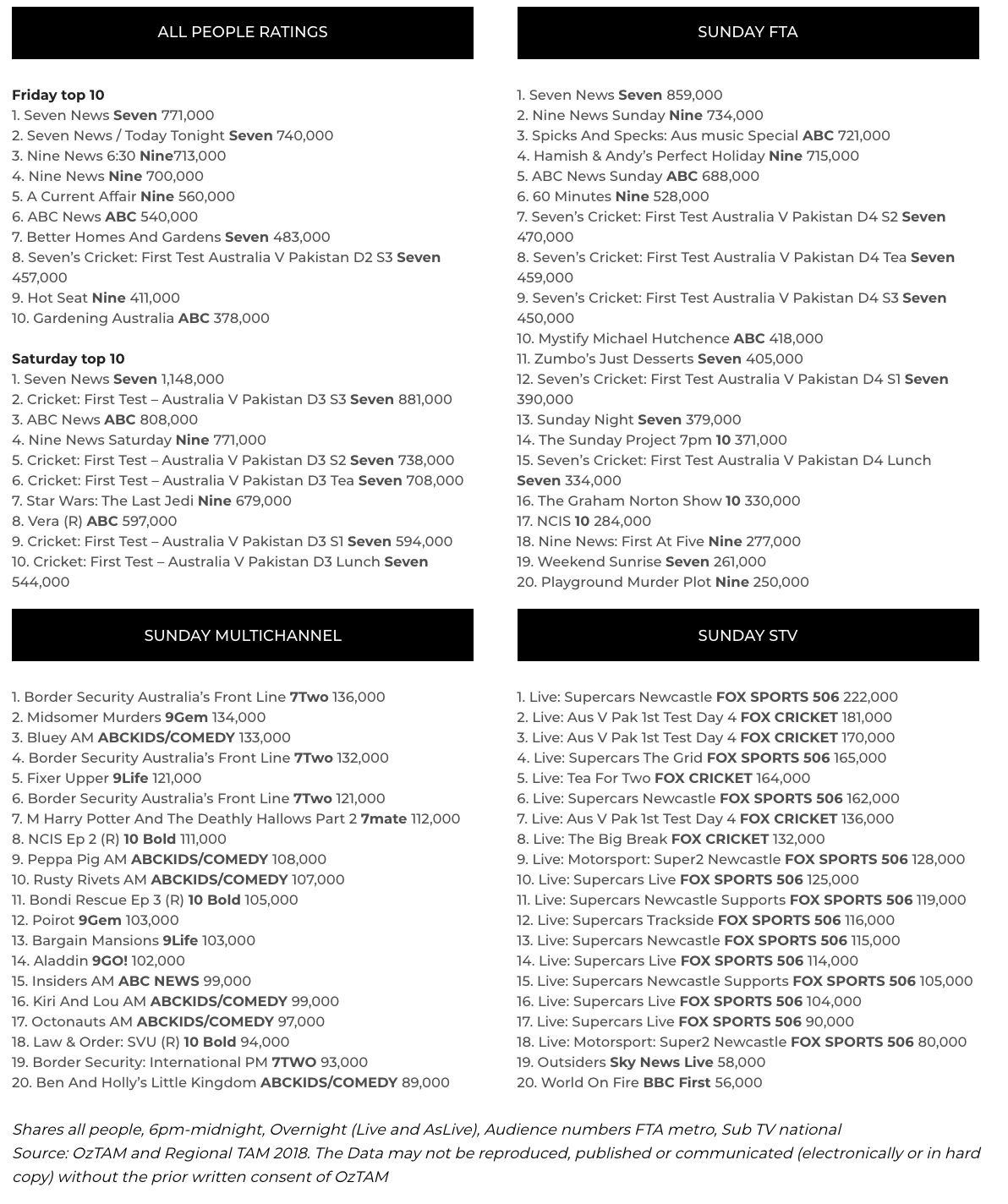