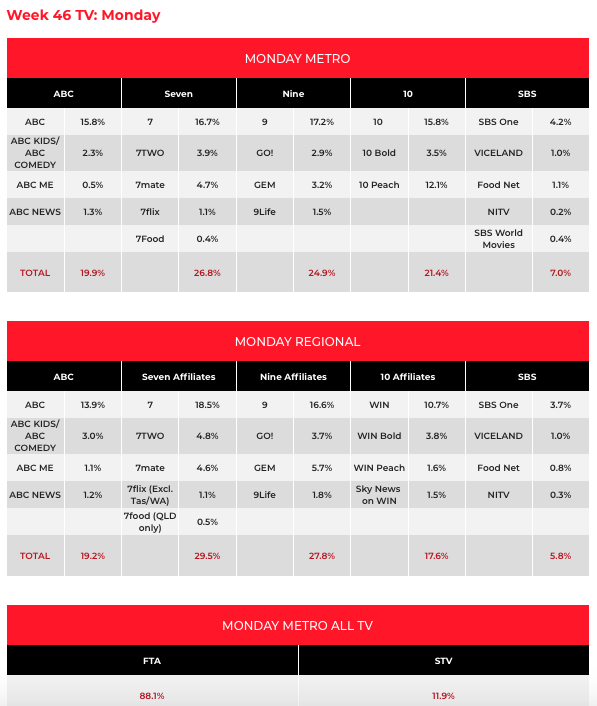 Home and Away isn’t often an all people timeslot winner, but it does bring a consistent audience to anchor the channel’s primetime every weeknight. The series averaged 563,000 last week and started week 47 on 608,000.

The start of a new week of A Current Affair did 715,000 to win the timeslot with a story about crazy council fines among others. The average audience across last week was 645,000.

The channel then went into ob doc mode, something that had been programmed recently on Thursdays.

The Project featured Hamish Macdonald co-hosting as Waleed Aly was on ABC duty. Guests included Damon Herriman and Urzilla Carlson with 497,000 watching after a week 46 average of 435,000.

The Amazing Race saw the teams on another flight as they headed toward Africa. The influencers were last to the pit stop, but it turned out to be a non-elimination leg so six teams remain in the series. The episode was on 616,000 after 651,000 a week ago.

The penultimate week of survey means the penultimate episode of Have You Been Paying Attention? before it goes into hibernation until after next Easter. The guests joining Ed and Sam last night were Marty Sheargold, Urzilla Carlson and Hayley Sproull and guests helping Tom ask the questions included Bachelorette couple Angie and Carlin. The show was top five and back closer to its best with 825,000.

Australian Story featured Shanna Whan who realised she was an alcoholic, but she did a lot more than give up drinking. She drew on her experience to start a one-woman campaign to start a conversation about the culture of alcohol in rural Australia. The episode did 605,000 after 647,000 a week ago.

Annabel Crabb and Waleed Aly then hosted Australia Talks, with the duo delivering gags almost every ti me they introduced a new segment. The 90-minute special co-host was billed as The Project‘s Waleed Aly. Hosting segments from different places around Australia were Kitty Flanagan, Benjamin Law, Anne Edmonds, Craig Reucassel, Steph Tisdell and Adam Liaw. The set looked like it might have been recycled from the 80s which is not a bad thing if it saved resources. The program did 551,000 after Four Corners did 564,000 in the slot a week ago.

A new season of a UK season of Who Do You Think You Are?featured the new Queen Elizabeth, Olivia Colman. The episode did 189,000. 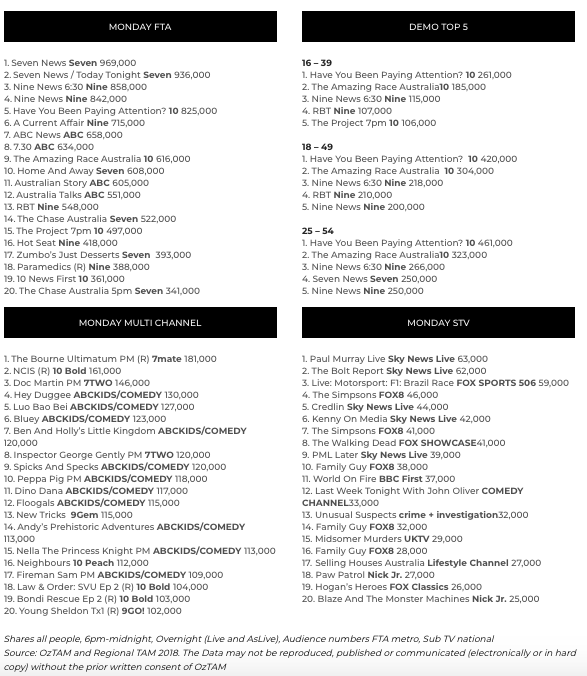