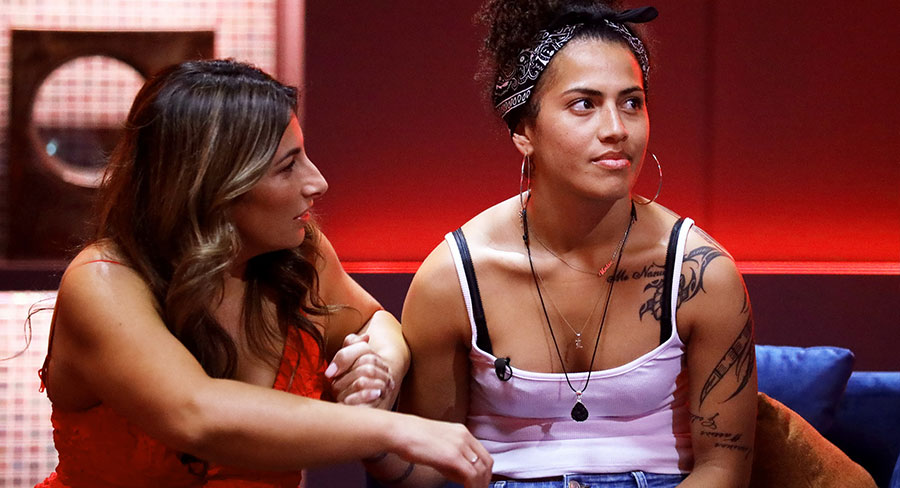 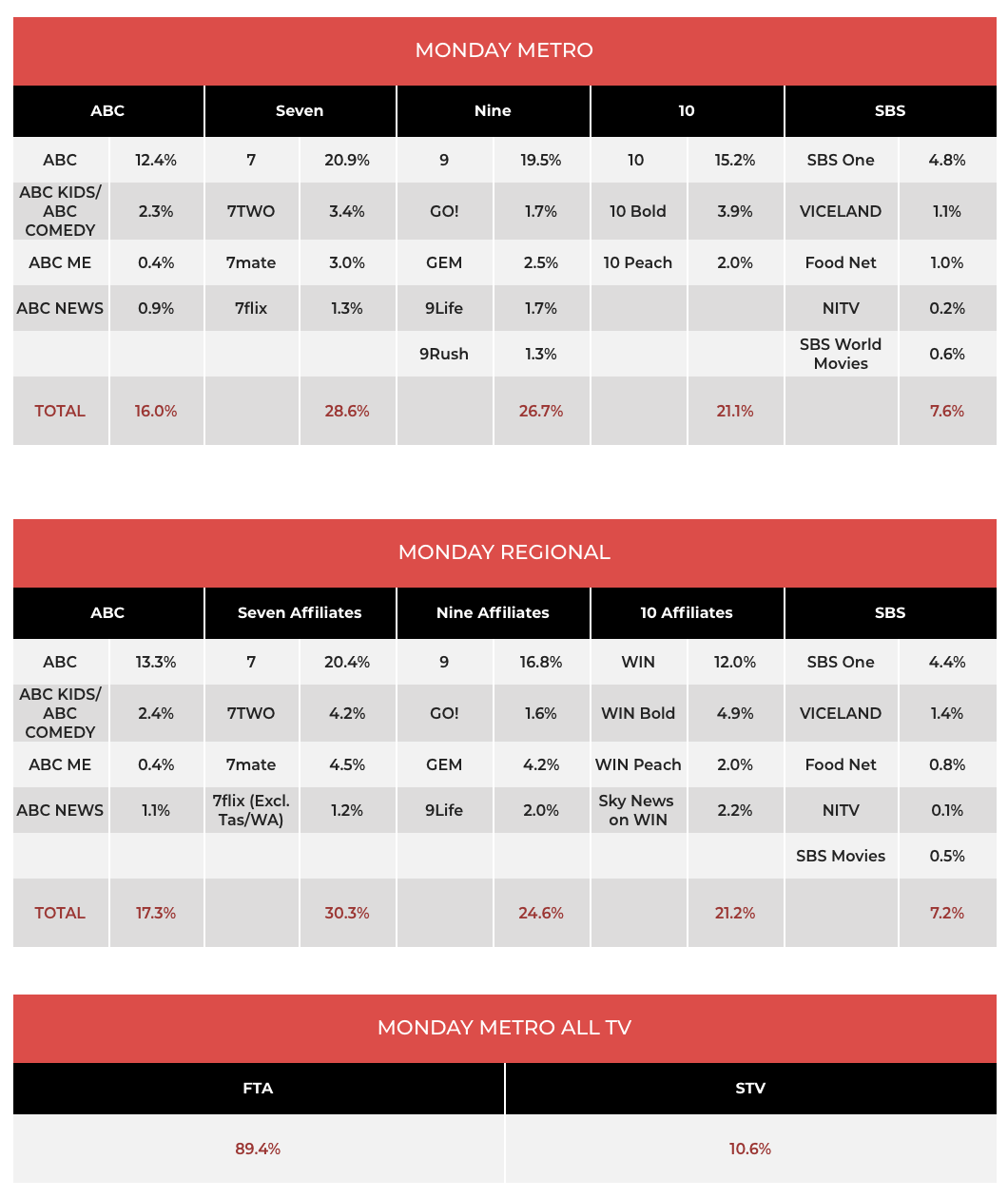 Seven: The Big Brother launch episode eviction segment audience of 930,000 was ahead of its 7.30pm competition The Voice and MasterChef. Seven split the debut episode of Big Brother into three parts:

Seven wanted the show to bring the age of its audience down and in that the program excelled. All three segments ranked the top three programs 16-39, 18-49 and 25-54 last night. The program listed Seven’s Monday primary channel share from 17.6% to 20.9% week-on-week.
Angus Ross, Seven’s network programming director commented this morning:
“We’re thrilled with last night’s launch of Big Brother. Big Brother, and our whole content led growth strategy, is about attracting those 25-54s which are key for our partners. Last night, that’s exactly what Big Brother did, as the #1 show for 25-54s as well as being the #1 non-news show for all viewers. On top of that, it was also the #1 show in the younger demographic of P16-39 as well as other key advertising demos. It was also the most-watched live entertainment program on BVOD ever. Big Brother is just getting started and we look forward to continuing to engage viewers as the show progresses.”
Laura Coriakula from Melbourne only lasted one episode of Big Brother, being the first to be eliminated. “I’m very shocked. I did not see that coming,” she said after the show. “I honestly thought the way that Kieran was carrying on I didn’t have to fight. It would have been nice to stay longer but every moment I was being myself. I wasn’t here to fake anything. I like being first at everything so there you go, first evicted.”

See also: Big Brother Ep 1 Recap: In and out as 12 enter and Laura goes home

10: The MasterChef top 10 went into battle for the first time against each other in a twins challenge. Four people emerged unsuccessful – Sarah, Reece, Poh and Brendan – and will face off in a pressure test tonight which will leave nine contestants. The audience of 855,000 saw MasterChef narrowly outrate The Voice and it was neck and neck with the start of Big Brother.
Have You Been Paying Attention? managed to win its timeslot, although it was with its smallest audience this year and its first time under 800,000. 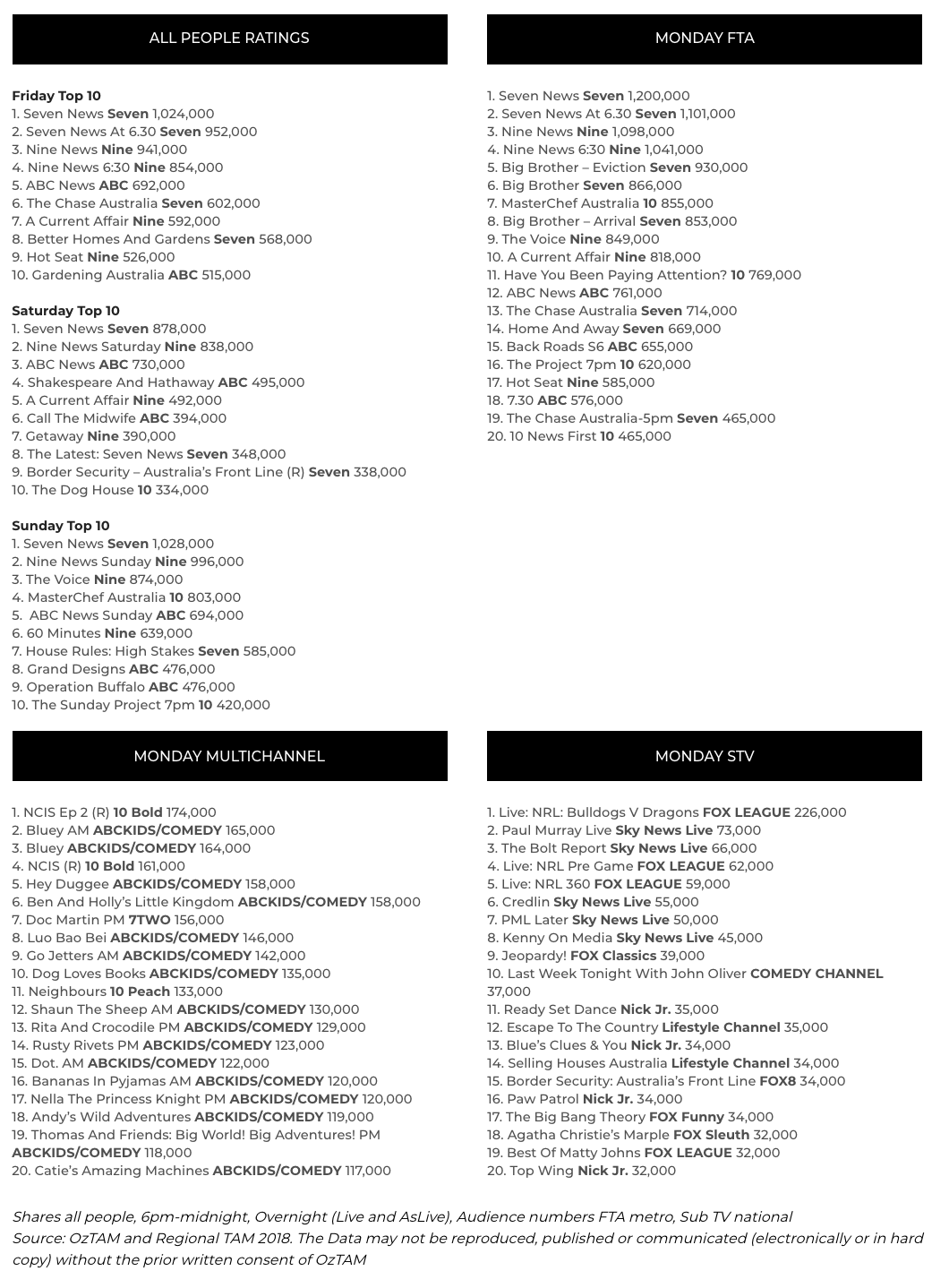