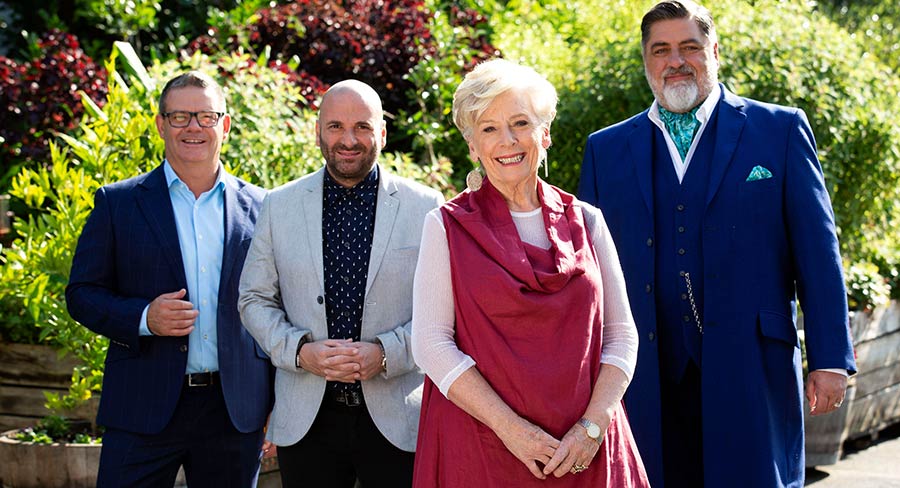 • MasterChef at Hanging Rock, The Super Switch off continues

• Viewing splits 60/40 across primary and multichannels
• Seven #1 primary channel, but cricket makes Nine #1 network
• MasterChef at Hanging Rock, The Super Switch off continues
• Fitzy’s busy 12 hours – from The Project to The Bar to Nova 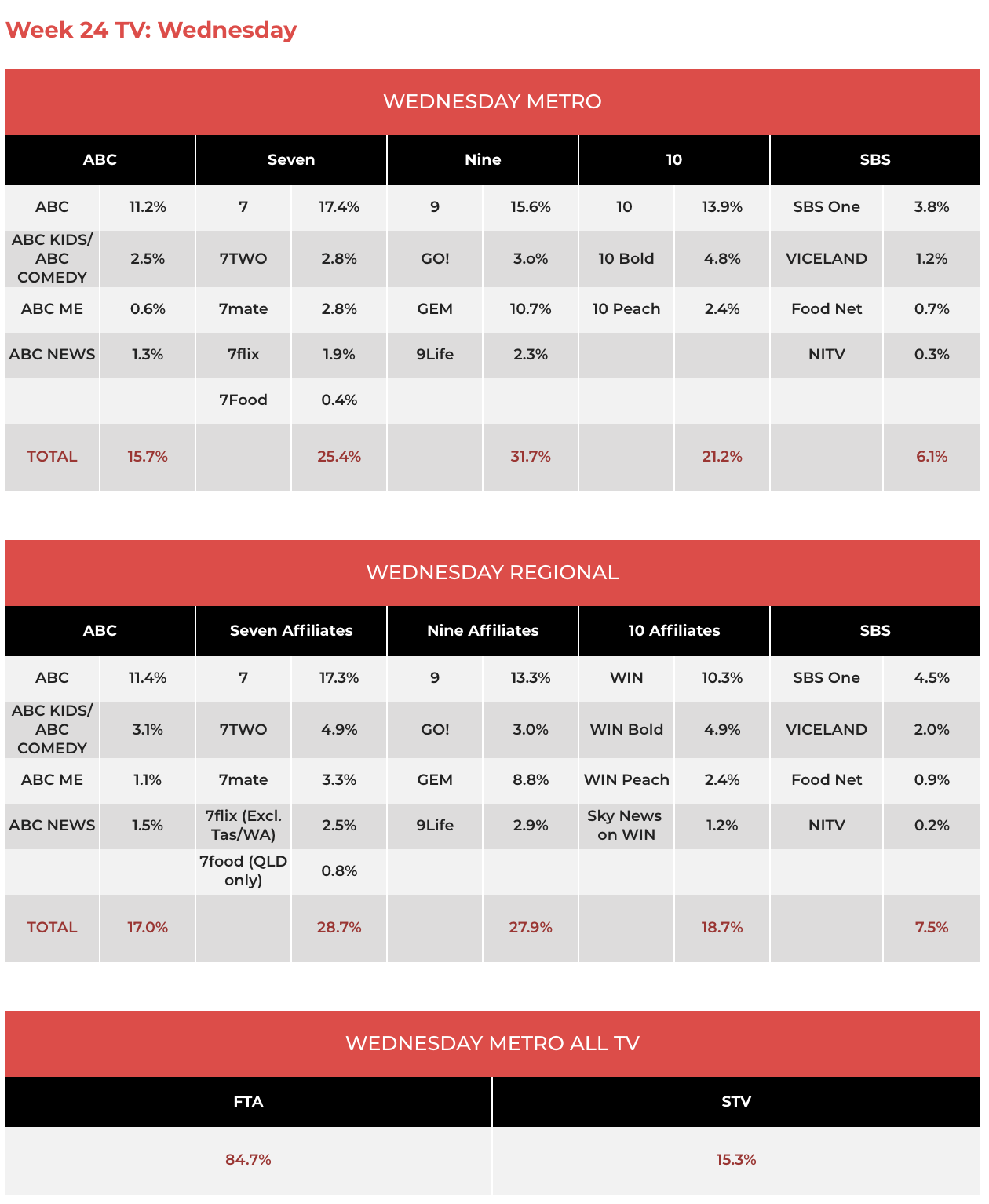 The Super Switch off is still a thing with a second night under 400,000 for the revamped format. It launched on Tuesday with 308,000 and grew to 381,000 last night with no episode of The Voice up against it. That might be enough for Seven to try a little longer in the timeslot. However the number of Australia’s Got Talent promos exploding across the screen indicate it could perhaps be getting ready for the timeslot.

The Front Bar went a day early because of the return of Thursday night AFL. A very busy Ryan Fitzgerald was part of the team last night, having made a dash from 10’s The Project so he could attend umpire Razor Ray’s anniversary. The Front Bar did 424,000 (260,000 in Melbourne) after 434,000 on Thursday last week.

While Seven had the biggest primary share, Nine was a clear leader in combined channel share thanks to cricket on 9Gem. The five primary channels had a 62% share of viewing last night, with 9Gem and the other multichannels scooping up the rest of the audience.

The World Cup cricket match between Australia and Pakistan helped push the 9Gem share to 10.7%. The first session of the cricket did 380,000 as Australia built what turned out to be a match-winning score.

MasterChef Australia had the biggest entertainment audience with 731,000 watching the team challenge set under the shadow of Hanging Rock. The episode was a demo champ too and was up exactly 200,000 on the number watching against Origin a week ago. It was MasterChef’s biggest audience of the year after the first two episodes in launch week did just under that mark.

Earlier in the night the busy Fitzy was on the desk during The Project before he headed of to report for The Front Bar. He stayed in Melbourne and co-hosted Nova Sydney breakfast from Nova 100 studios this morning. The Project was on 473,000 in an episode that featured the host of Taboo, Harley Breen.

Later in the night Five Bedrooms did 499,000 which is a strong number for a drama. Last week’s episode climbed to 623,000 after adding encore, BVOD and timeshift over seven days.

Alan Jones was the subject last night on Anh’s Brush With Fame with 544,000 watching.

The Weekly had another strong episode with more than just a little bit of help from Tom Gleeson. His Go Away Australia visited Sydney while in Hard Chat he spoke with another Gold Logie nominee Costas. The episode did 514,000. 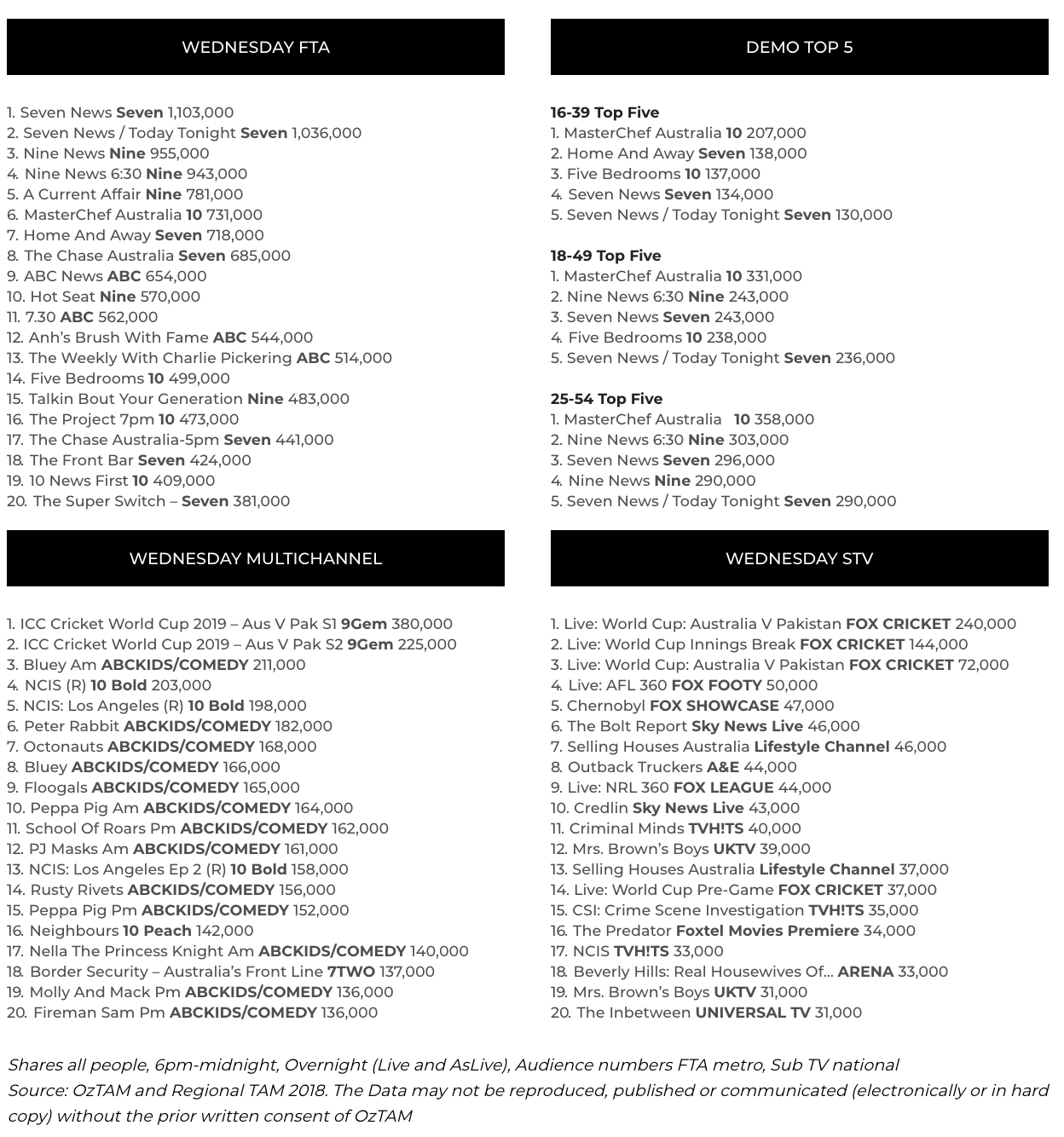