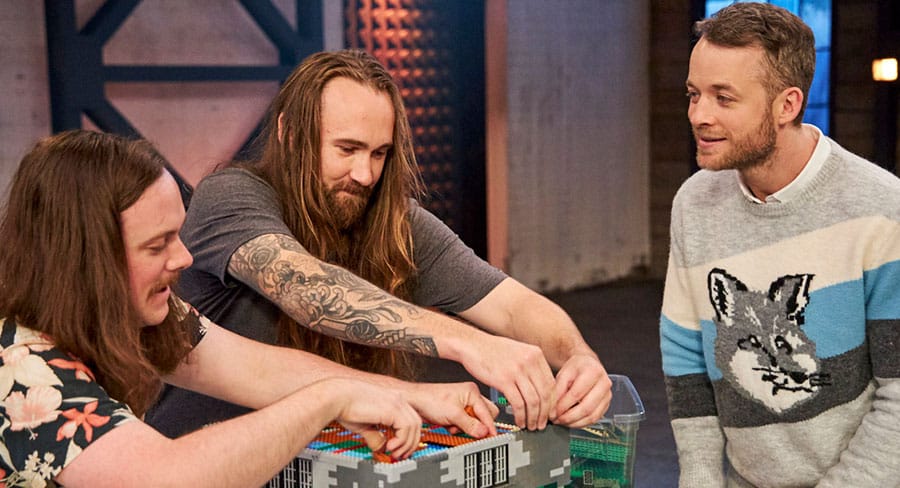 Nine: Just two episodes of Lego Masters this week with Nine managing its schedule to show just enough that should win it the week. (9 episodes over 3 weeks last year.) Immunity from the next elimination was on offer in a fascinating stability challenge. Host Hamish Blake explained it was all about make and shake. Teams had to build a tower that would then withstand the show’s shaking machine which delivered various strength earthquake effects lasting 10 seconds. Blake claimed there was more BPM (bricks per minute) laid last night than on any other episode ever. Three teams managed to survive the quakes so it came down to aesthetics with Tim and Dannii winning with their giant popcorn holder. The episode did 1,097,000 after 1,053,000 on Monday last week.
Earlier in the night A Current Affair began with host Tracy Grimshaw talking with chief health officer Brendan Murphy. The episode did 832,000 after last week the program averaged 789,000.
The second and final episode of Informer 3838 was compelling viewing as it detailed how the lawyer turned on her criminal clients, including her partner. The episode did 574,000 after 631,000 last week. That first episode added 141,000 to 772,000 in the seven days after the original broadcast.

10: The Project continued its run above 600,000 after averages last week of 607,000 at 7pm and 397,000 at 6.30pm.
MasterChef had a live challenge in front of a screaming audience in an event space at the Melbourne Showgrounds. The challenge was a cracker, but it was almost overshadowed by the over-excited crowd and some of the contestants who got carried away too. It was in stark contrast to the episodes so far which, thankfully, have lacked some of the theatrics that the former judges brought to the format. Tessa, Simon and Khanh were the winners of three challenges that helped sort out the contestants that will take part in tonight’s pressure test. The episode did 826,000, the smallest audience this season. Sam Neill in his vineyards might have attracted some of the foodies after 8pm.
A repeat episode of Hughesy, We Have A Problem then did 258,000.

ABC: The channel’s Monday share has been over 16% more often than not and for many weeks this year has often been the channel’s highest-rating evening for the week. Last night it was the appearance of Sam Neill on Australian Story which drew a crowd early in the evening. Several years ago episodes of Australian Story used to push close to 1m now and then, but it’s been a while. It happened last night though with Neill letting viewers see inside his world including his Two Paddocks Winery and the charming Otago village of Clyde. Neill even spoke about his relationship with ABC reporter and commentator Laura Tingle. The audience of 911,000 was the channel’s best for the night after the News.
7.30 was over 800,000 and then Four Corners was over 700,000 with Media Watch on 687,000. Q+A did 390,000.

SBS: The final episode of a two-part special The Queen Mother did 174,000.