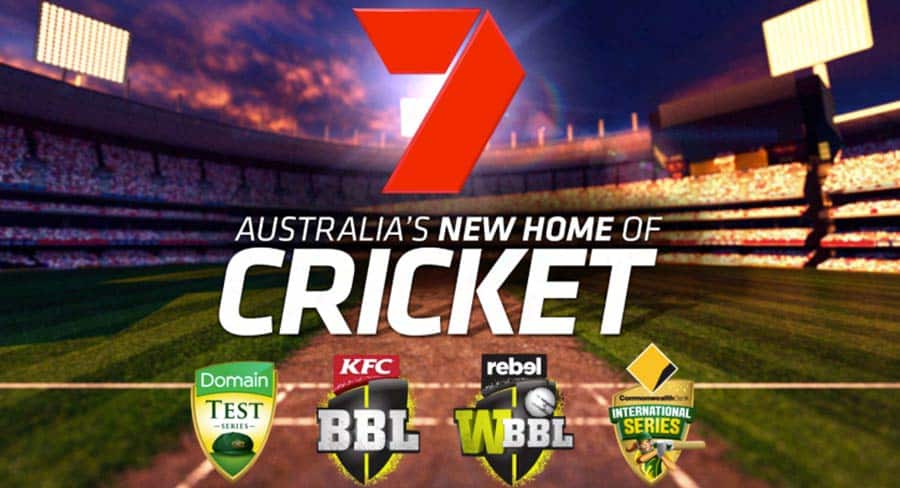 Australia’s new FTA TV home of cricket, Channel 7, has unveiled an outline of its summer coverage plans ahead of its first season where a sole free-to-air network will broadcast Test, BBL, WBBL and international women’s cricket in Australia.

Seven’s WBBL coverage starts on December 1 from the Junction Oval, followed by the start of the international Test series Australia v India from Adelaide Oval on December 6, then the Big Bash action launches from December 19. Seven’s Mel McLaughlin and James Brayshaw will form a dual-hosted team for the first time ever in Australian cricket broadcasting in Test cricket. Bruce McAvaney will also be part of Seven’s cricket coverage this summer. Australia’s best sports interviewer and most revered broadcaster will interview the sport’s most iconic and interesting figures during the lunch break at the Melbourne and Sydney Test matches.

Lisa Sthalekar, Brad Hodge, Julia Price and Dirk Nannes will all provide expert commentary throughout the summer across WBBL and BBL. Current NSW star Trent Copeland will also provide expert analysis bringing current information of all the players he has come up against this season and unique insight into the pitches he’s already played on this season.

Seven has also revealed its international expert commentators for the summer ahead including Phil Tufnell, Aakash Chopra and Marvan Atapattu.

Chopra, the former Indian Test opening batsman, has carved out an impressive broadcasting career and brings a wealth of current knowledge on the touring Indian team.

Crowd favourite and former England off spinner Tufnell will bring plenty of fun and expert commentary through the BBL and also the Tests against Sri Lanka.

Former Sri Lankan captain Atapattu will also provide commentary in the Gabba and Canberra Test matches as he brings viewers all the insights into the Sri Lankan team. For the next six years, Seven will annually broadcast: Australia’s highest ever run-scorer and former captain, Ricky Ponting, is set to join the new home of cricket, Channel 7. Ponting, one of the most decorated cricketers to ever wear the baggy green, is currently regarded as the best cricket commentator in the world. His intimate knowledge of the game is matched by his ability to communicate to all cricket fans of varying interest and understanding.

Fleming compiled an impressive career for Australia across Tests and ODIs as a fast-medium swing bowler including a Test hat-trick on debut and a key role in the 1999 World Cup winning team. He’s been equally successful throughout his time in the commentary box on television and radio where fans have enjoyed his entertaining and insightful “bowlology” theories.

Michael Slater was Australia’s aggressive stroke-playing star at the top of the order for a decade, including during the team’s golden run of success where it won a record 16 consecutive Tests in a row. He has brought an upbeat, vibrant and fun style to his commentary that fans have enjoyed.

McGrath, the world’s highest Test wicket taker among fast bowlers with 564, was renowned for his impeccable line, length and bounce that regularly knocked over some of the best batsman of all time. He joins the Seven commentary box after various stints in radio and television and is set to give fans insight into the toils of fast bowling.

International sports broadcaster and commentator, Alison Mitchell, is an award-winning journalist and has won plaudits around the world for her polished and professional cricket commentary.

Having started her career at the BBC where she has worked extensively across television and radio in broadcasting and journalism, Mitchell has over 10 years’ experience in ball-by-ball commentary around the world including England, Australia, Sri Lanka and India.

A meticulous researcher and lover of the game, Alison also has an excellent ability to draw out the best from the experts alongside her in the commentary box.

Brayshaw, a first-class cricketer for 10 years including two winning Sheffield Shields, will bring his upbeat style to Seven’s cricket and will also call BBL matches throughout the summer. Together the pair will bring a fresh approach to Test cricket broadcasting.

Australia’s “mastercaster” Bruce McAvaney will broadcast feature pieces at the Test lunch breaks in Melbourne and Sydney to give fans an insight into the superstar players and coaches that make the game great.

The former Australian women’s captain carved out an impressive career as an all-rounder including the honour of being the Australian Women’s cricketer of the year in 2007 and 2008. And has since made a successful transition to the commentary box with inside knowledge of the women’s game at the highest level.

The veteran sport broadcaster and award-winning journalist has earned enormous respect from cricket-loving fans with decades of experience calling the game. He will call Test matches on Seven this summer as Australia faces India and Sri Lanka.

A left-handed batsmen who played 56 Tests for Australia amassing 10 Test centuries to his name, Katich joins Seven’s cricket for expert Test commentary in Melbourne and Sydney. More recently he has provided expert comments for ABC radio.

A stylish right-hander who played both Test and ODI cricket for Australia delighting fans with his penchant for shots square of the wicket and a powerful cover drive, Blewett has impressed listeners in recent years with his radio commentary.

A wildly popular figure among fans as a fast bowler for Australia through the late 90s and early 2000s, he formed Australia’s statistically most successful opening bowling pair ever with Glenn McGrath. He has carved out a successful coaching career at Sussex and joins Seven for an expert role at the Adelaide Test match. Hodge has a Test double century to his name and a reputation as one of the most consistent BBL players in the world. Viewers have also come to know Hodge via his insightful and playful on-field interviews during play at the BBL. He’ll provide expert commentary throughout the Big Bash.

Julia Price is a former cricketer for the Australian women’s cricket team. She played 10 Tests and 84 one-day internationals for Australia and was part of the 1997 and 2005 Women’s Cricket World Cup triumphs. Having coached the Tassie Roar and Hobart Hurricanes, she brings an understanding of the game, both at a player’s and coach’s level.

Dirk Nannes is a former Australian cricketer who played for Australia and the Netherlands. The left-arm fast bowler was in high demand as the T20 format swept the globe and he played for 15 different teams or franchises across nine countries. He’ll be providing expert commentary in WBBL and BBL for Seven.

A former slot left arm orthodox bowler for England, Tufnell has also carved out an entertaining career in television. He’ll bring his cheeky and fun sense of humour to his commentary across BBL and also the Tests against Sri Lanka.

Former Sri Lankan cricketer and captain Marvan Atapattu played Test matches and One Day Internationals for 17 years, and went on to become one of Sri Lanka’s most prolific run-scorers. Atapattu has since forged a strong career in coaching and commentary.

Aakash Chopra played for the Indian cricket team in the early 2000s, known as a defensive opening batsman and close catcher in Test matches. The author of several books, he is known for his distinctive commentary and match analysis.

The current NSW star will bring expert analysis drawing on his knowledge of the current players, many of whom he has played with or against this season.

Gelmi has worked in sports journalism and presenting for the past four years on national breakfast television, covering breaking sports news. As she’s the granddaughter of Australian middle distance great Herb Elliott, sport is in her blood. She will work across Tests, BBL and WBBL.

Describing himself as the “unfunny Front Bar one” and “least swashbuckling” member of Seven’s BBL commentary team, Maher is also a respected journalist and sports presenter on radio and television. Maher’s extensive media commitments cover a variety of sports including AFL and cricket.

Experienced broadcaster and former elite athlete Jason Richardson will be hosting various BBL and WBBL matches across Seven’s cricket coverage. A Stawell Gift winner (1993), he brings plenty of personality and fun to a broad range of sports in Seven’s portfolio.