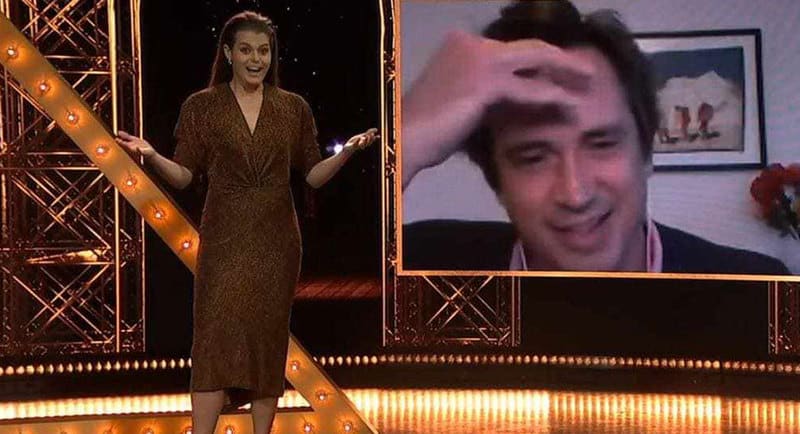 Should Facebook, Google and Twitter take action in Australia against “Mediscare” style campaigns at election time? What about Clive Palmer’s claims of Labor planning to introduce a death tax? Reports The Australian’s Chris Griffith.

Those types of issues in a bigger US context were the subject of a grilling of the CEOs of Facebook, Alphabet and Twitter by a US select committee examining their policies to remove or flag content posted during the US election campaign. At times the interchanges were hostile.

Section 230 of the US Communications Decency Act lets the tech giants remove material considered to be obscene, lewd, lascivious, filthy, excessively violent, harassing or otherwise objectionable. The law shields them from liability under the US First Amendment protecting free speech.

The fact the hearing took place within a week of the US election means it is seen as partisan by the Democrats, with one Senator branding it “a sham”.

The tipping point for the hearing was Facebook’s and Twitter’s action to block or limit the online distribution of The New York Post’s recent story about Joe Biden’s son Hunter, and his activities in Ukraine. The Trump team see it as a flashpoint issue at the election but the alleged facts around it are hotly disputed and many have dismissed them.

Netflix raises prices in the US, but cheapest plan remains unchanged

It’s getting a bit more expensive to subscribe to Netflix in the US, reports The Hollywood Reporter.

The streaming giant has upped the cost of two of its plans, its first price increase in a year-and-a-half.

Netflix is keeping its cheapest offering, the basic plan, at $9 per month. That option only allows for one stream and does not give the subscriber access to HD programming.

News Corp chief executive Robert Thomson says the push to force technology “behemoths” such as Google and Facebook to compensate media outlets for news content they use on their platforms has “finally” started to pay off, reports The Australian’s Kieran Gair.

He used the occasion to pay tribute to a range of journalists at the company’s News Awards night, including 12 nominees and four winners from The Australian.

Investigations editor Sharri Markson and national chief of staff Kylar Loussikian, both Walkley Award-winners who returned to The Australian this year, won the Achievements in Investigative Journalism award for their explosive story revealing how the Chinese government recruited Australian scientists and academics to a ­secretive research program.

The Australian’s Damon Johnston, Rachel Baxendale and Remy Varga were also recognised as finalists in the Investigative Journalism category for their exposé on a Chinese agent’s secret role in Australia.

The Weekend Australian Magazine’s Trent Dalton won the Storyteller of the Year award for a body of work including a feature that explored the trail of destruction left by the summer bushfires.

Photo: The Weekend Australian Magazine’s Trent Dalton wins the Storyteller of the Year award at the 2020 News Awards hosted by MC Hannah Hollis on Thursday

The Herald Sun has scooped the pool at the prestigious News Awards, with Health editor Grant McArthur taking home the Sir Keith Murdoch Award for journalist of the year.

National political editor Tom Minear won the highly-competitive Scoop of the Year award for his bombshell exclusive detailing the Premier’s top-secret recovery road map, which revealed Melbourne’s harsh lockdown would be extended. Daniel Andrews tried to claim the plan had “no status” and was out of date, only to release an almost identical road map days later.

Mick Warner won the award for Achievements in Sports Journalism for his powerful story on Danny Frawley’s posthumous diagnosis with neurological disorder CTE, and the first interview with Mark “Bomber” Thompson since his drug conviction.

Covid-19 came along this year and upended the world’s priorities, and so it has upended the Financial Review Rich List, reports Rich List editor Michael Bailey.

It was a very good year to own an Australian iron ore mine, as governments everywhere threw money at infrastructure projects to stimulate their battered economies, at the same time as supply faltered in pandemic-ravaged Brazil.

The subsequent surge in the red metal’s price was enough to put Gina Rinehart back on top of the Rich List for the first time since 2015, with record wealth of nearly $29 billion – up 109 per cent from her valuation last year.

Her fellow Pilbara picker Andrew Forrest was next with $23 billion, his highest showing since he topped the list in 2008, and a 188 per cent increase from when his fortune was last measured.

Retailer Gerry Harvey and e-tailer Ruslan Kogan have had their differences, but this year both benefited as people spent more money on stuff for inside their houses. And lots of them used Afterpay to reduce the upfront hit of the spending, putting co-founders Nick Molnar and Anthony Eisen into 50th and 51st places respectively.

Then there are those who’ve fallen off the Rich List altogether. Most spectacularly, the three founders of Flight Centre – Geoff Harris, Bill James and Graham Turner – don’t appear in these pages for the first time since the 1990s, as the pandemic decimated the travel industry.

Also off is Patrick Grove, who took on Netflix in Asia. His iflix raised more than $420 million from investors, but Grove left its board in April and the business was sold for reportedly less than $100 million to Tencent shortly afterwards. Neville Bertalli comes off the list after a nightmare year for his Patterson Cheney car yards in Melbourne, made worse by Holden’s complete departure from Australia in February.

What happens to Fox News if Trump loses? Rupert Murdoch is prepared

The man who helped create Fox News as the most influential platform for conservative politics in America fully expects that Biden will win – and frankly isn’t too bothered by that, reports The Washington Post in an item republished in The Sydney Morning Herald.

Rupert Murdoch, the 89-year-old billionaire whose family controls Fox News’s parent company, has told associates that he is resigned to a Donald Trump loss in November. And he has complained that the President’s current low polling numbers are due to repeated “unforced errors” that could have been avoided if he had followed Murdoch’s advice about how to weather the coronavirus pandemic, according to associates who spoke on the condition of anonymity to describe private conversations.

He had known Trump for decades as a frequent source and subject for his New York Post tabloid, and he was not initially thrilled with the idea of a Trump presidency. “When is Donald Trump going to stop embarrassing his friends, let alone the whole country?” he tweeted in July 2015. Murdoch even flirted with endorsing Hillary Clinton‘s 2016 candidacy and invited her to meet. She declined, according to two people familiar with the exchange.

Convicted drug smuggler Schapelle Corby and controversial lingerie model Arabella Del Busso are among 17 celebrities who took part in a gruelling SAS (Special Air Service) selection course and one ­insider told Confidential that contrary to reports, everyone is on the same rate.

“Part of their pitch was that everyone is on the same money. They said it’s a ‘favoured nations fee,’ the source said. “There’s a flat fee and an additional daily rate you’re paid for each day you stay on.”

A spokeswoman for the Seven Network would not confirm or deny salary speculation. “We do not disclose the terms of our agreements with any people, from any of our shows,” she said.

“All I’ll say is the total talent fee would’ve been less than $1 million for the entire group … a good investment for Channel 7 as ratings are through the roof,” the insider said.

Today host Karl Stefanovic has announced his excitement at being called up to co-host Nine’s State of Origin coverage beginning with the series opener in Adelaide on Wednesday, reports Nine’s WWOS.

Stefanovic grew up in north Queensland, and has been a long-time, devoted Queensland Maroons and Brisbane Broncos supporter. 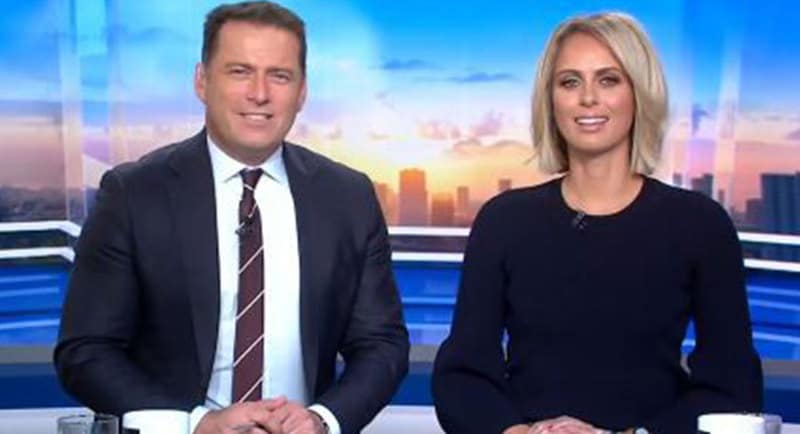 The TV personality said he was “pumped” for his role covering the State of Origin series.

“Ever since I was two years of age, watching Queensland win for 20 years in a row, State of Origin has been a part of the fabric of our being when we grew up in Queensland,” Stefanovic said, refusing to let facts get in the way of his passion.

“I am so excited. I have been asked to fly to Adelaide and co-host the coverage with James Bracey next week.

“I am not going to be at all biased, but I am going to bring a whole bunch of Queensland to the coverage with legends.

“We’ve got a huge team of the best in the business flying down in COVID bubbles to get this coverage like it’s never been done before, three weeks in a row. So it’s a huge logistical exercise. It’s going to be a packed stadium in Adelaide.”

The prospect of Virat Kohli’s India playing an Australia A side in a day-night warm up game at the SCG next month has delighted fans and one broadcaster but given another more cause for complaint in the middle of a bitter court dispute, reports The Australian’s Peter Lalor.

The match which will potentially feature the biggest name in the game clashes directly with the first week of the Big Bash League.

Cricket Australia plans to start the BBL on December 10 and the three-day game against India begins December 11.

Fox and Seven share the rights to the BBL, but Fox also plans to broadcast the tour match on an alternative channel as well as the domestic T20 tournament.

Seven argues the match is a distraction at the start of the BBL which has a week of clear air before a brief hiatus for the first Test.