Kerry Stokes‘ Seven West Media may be forced to lift its $64 million offer for Prime Media as another key shareholder in the regional broadcaster expressed dissatisfaction with the terms of the deal, reports The Sydney Morning Herald’s Jennifer Duke.

Regal Funds Management co-founder and chief investment officer Philip King, who holds Prime shares on behalf of clients, admitted he is unhappy with Seven’s offer for the business but has yet to decide how the fund will vote later this month. In a short statement sent by text, King said: “We haven’t actually finalised our decision yet but we aren’t happy with the price”.

The dissatisfaction with the price from minority shareholders makes Bermuda-based billionaire Bruce Gordon‘s position towards the deal even more crucial. Gordon arrived in Australia this week however sources close to the media mogul have been circumspect about his overall view on the deal.

Young Sheldon, meet SpongeBob: CBS and Viacom back together

The new CBSViacom combination brings together a set of businesses that once dominated the media and entertainment industries but are now fighting to stay relevant in an increasingly digital world, reports The New York Times.

CBS and Viacom were already corporate siblings before the deal, both controlled by National Amusements, a theatre company that grew into a major conglomerate under the mogul Sumner M. Redstone, who is ailing at age 96. His daughter, Shari Redstone, emerged as the company’s leader in recent years and had sought a merger since 2016. With the deal, Ms Redstone cements her role as a trailblazing figure in a male-dominated industry, a woman whose peers now include leaders of media behemoths like Brian Roberts of Comcast and Robert A. Iger of the Walt Disney Company.

Now that Disney has joined Netflix and Amazon as a force in the streaming industry, the merger is meant to make ViacomCBS, as the new company will be called, a bigger player in digital entertainment than the two companies had been as separate entities.

ViacomCBS also has a small toehold in streaming services with CBS All Access and Showtime, which together have more than eight million subscribers and feature originals such as the reboot of Twilight Zone and Star Trek: Picard, which is scheduled to have a January debut. Viacom’s free, ad-supported streaming service, Pluto, has more than 20 million viewers a month.

The Australian’s Bridget Carter has taken out the Keith McDonald Business Award for excellence in business journalism at this year’s News Awards, reports The Australian’s Leo Shanahan.

Carter received the award for her work producing the daily DataRoom column for The Australian. Her scoops included some of the year’s biggest business mergers and acquisitions, including Asahi’s takeover of Carlton & United Breweries.

The top award, the Keith Murdoch Award, went to The Sunday Herald Sun’s Annika Smethurst, whose home was raided by AFP officers in June after she reported intelligence agency Australian Signals Directorate was planning surveillance on Australian citizens. The raids triggered global outrage, a High Court appeal and a national press freedom campaign. The award was presented by News Corp co-chairman Lachlan Murdoch.

The Herald Sun’s Anthony Dowsley and Patrick Carlyon won for Achievements in News Reporting for their tireless coverage of the Lawyer X scandal.

Champion Australian leg spinner Shane Warne won the award for commentary and opinion for his commentary for Fox Sports cricket.

News Corp Australia executives and journalists gathered at the News Awards in Sydney on Wednesday night.

However, in Melbourne there was an equally import event for the Herald Sun business – Confidential’s annual Melbourne Christmas party as a new inner-city venue:

Coinciding with the launch of the new Prahran venue, the event was headlined by Eurovision contender and Australian singing favourite Vanessa Amorosi.

She debuted her new song Back to Love.

Amorosi was joined by almost 300 VIP guests, hosted by the Confidential team and the venue’s owner Simon Lennox.

Among the glamour crowd were LA-based actors Ash Brewer and Bella Heathcote.

Melbourne Cup winning trainer Danny O’Brien and his wife Nina were also in the crowd, as were footy legends Dermott Brereton and Anthony Koutoufides.

Australia’s most decorated soldier and general manager of Seven West Media Queensland, Ben Roberts-Smith, is seeking access to documents that could disclose confidential sources of journalists Nick McKenzie and Chris Masters as part of defamation action against The Sydney Morning Herald and The Age.

The Herald and Age‘s defence argues that the articles do not defame Roberts-Smith and allege he was involved in six unlawful killings in Afghanistan.

The case will go to trial in June. However, the Herald and The Age are fighting requests from Roberts-Smith for some documents, interviews and materials generated during the investigations. Nine says disclosing these documents would expose confidential sources and breach ethical responsibilities.

The drought special, which was broadcast from regional NSW towns Bourke and Dubbo, brought in about $180,000 to Jones’ show, sources close to Macquarie said.

Nine advertisers have supported the bush broadcasts with others increasing their spend for the week.

Among these brands were returning and loyal advertisers, such as Commonwealth Bank and Harvey Norman.

A spokeswoman for the radio business said the entire sector was “operating in a challenging and difficult market”.

“Management, with the support of the board, have conducted a comprehensive review of our workforce structure to provide an effective and efficient organisation for now and into the future. These proposed changes will impact some of our people,” she said.

Matt, Sarah & Matty J, Nova 96.9’s Saturday breakfast show, will now be heard on-air for the two weeks in the lead up to Christmas, from Monday 9 December at 6am. 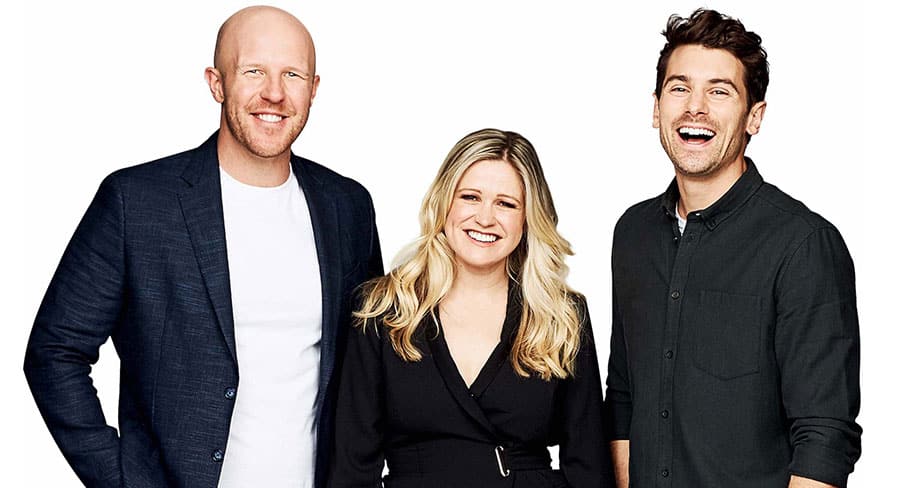 Matt De Groot said, “I couldn’t be more excited to be involved once again in Nova’s summer breakfast with Sarah and Matty J. We’ve all had a big year and this is a great way to finish it off. We got together a few weeks ago and agreed that the summer show would simply be wall-to-wall Christmas carols, littered with as many Christmas ham giveaways as possible. Management is yet to sign off on that but regardless, I can’t wait.”

Sarah McGilvray said, “I’m very excited to spend a couple of weeks with my second favourite male radio co-hosts, plus I couldn’t turn down the chance to avoid full time parenting for another two weeks! Expect a lot of Mariah Carey music…well, really, just one song played a lot!”

Matty J said, “Doing Summer breakfast is like finally getting the keys to your parents’ car. We’ll start off a little cautious but after a week the place will be filled with used coffee cups, dirty clothes and a half-eaten sandwich. But on a serious note, finishing off an incredible year with this opportunity is icing on the cake! Then the sprinkles on that icing is being able to share it with Matt and Sarah, who I’ve had the pleasure of working with almost every weekend for the last 12 months. The three of us offer a lot of humour, which is sometimes sweet natured, politically incorrect or immature depending on which one of us is talking. I can’t wait!”

The team will be heard weekdays from Monday 9 December to Friday 20 December at 6am on Nova 96.9 in Sydney. Fitzy& Wippa will return to breakfast on Monday 20 January 2020.

NRL could divide matches into quarters to beef up broadcast deal

The ARL Commission is investigating the possibility of chopping the game into four quarters to help maximise broadcast revenue in its next TV deal, reports The Sydney Morning Herald’s Andrew Webster.

The push comes from newly crowned chairman Peter V’landys, who has wasted no time stamping his authority on League Central since replacing Peter Beattie in late October.

V’landys will on Thursday chair one of the most important commission meetings in recent times with a raft of significant rule changes to be discussed and eventually ratified.

The most intriguing discussion, however, will be around dividing the game into quarters, something that’s only usually seen in pre-season matches because of heat stress.

V’landys has made it clear his No.1 priority is to increase broadcast revenue beyond the $1.8 billion the NRL received from its last TV deal.

While the current contract with Channel Nine and Fox Sports doesn’t end until the end of 2022, the NRL wants to bring certainty to the player market by working out just how much revenue will be coming into the game.

Exiled Wallaby star Israel Folau said he felt “vindicated” after extracting an apology and an $8 million payout from Rugby Australia in a settlement which on Wednesday ended his drawn-out legal battle with the sporting body which sacked him earlier this year, reports News Corp’s Clarissa Bye.

Rugby Australia apologised and was forced into an out-of-court settlement with the former Australia fullback, who was seeking $14 million compensation for his “wrongful termination” by the Aussie rugby union body over his April social media post saying hell awaits gay people.

While the amount of money has not been disclosed, it is believed that after 14 hours of mediation the payout is believed to be $8 million.