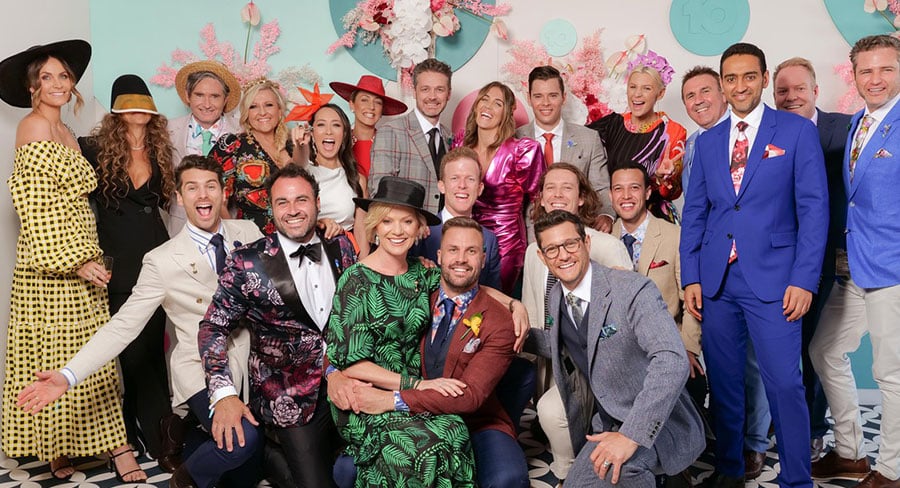 The media sector continues to be battered by the winds of change and a volatile ad market, but there were few signs of hardship at the media compounds inside the Birdcage at Flemington on Cup Day.

Network 10, the Herald Sun and Crocmedia all had significant constructions housing corporate racegoers across the four Flemington days of the Spring Carnival.

The HWT investment housed guests of the HWT’s Herald Sun across three floors with a very popular rooftop giving visitors uninterrupted views of the Flemington straight.

Network 10 certainly had the party vibe going from early in the day until a self-imposed noise restriction close down the doof-doof and Aussie rock classics moments before The Project went to air at 6.30pm from 10’s ground floor Birdcage studio. 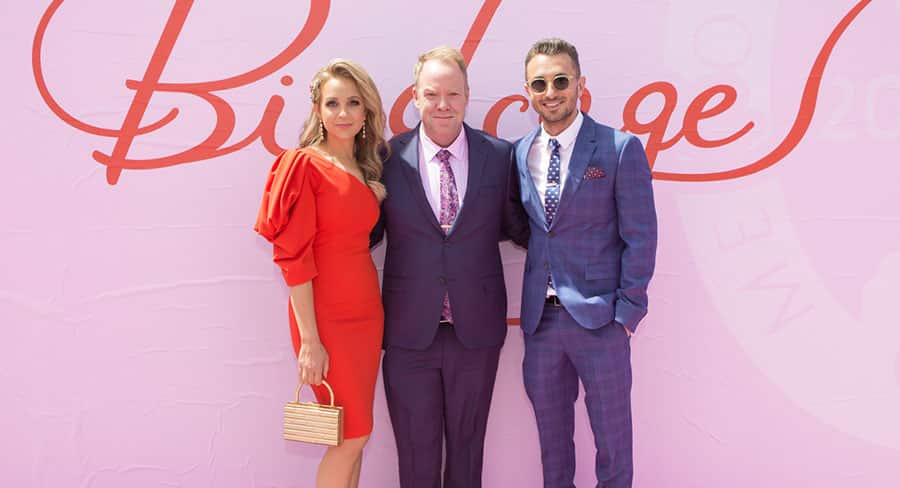 The Project’s Carrie, Pete, and Tommy

10 is making the most of its VRC $100m five-year partnership. Studio 10 broadcast with a 7am start on Cup Day, while a significant technical undertaking took place at 5.30pm with 10’s three east coast news bulletins live-to-air from specially constructed studios on the other side of the track after the last race. 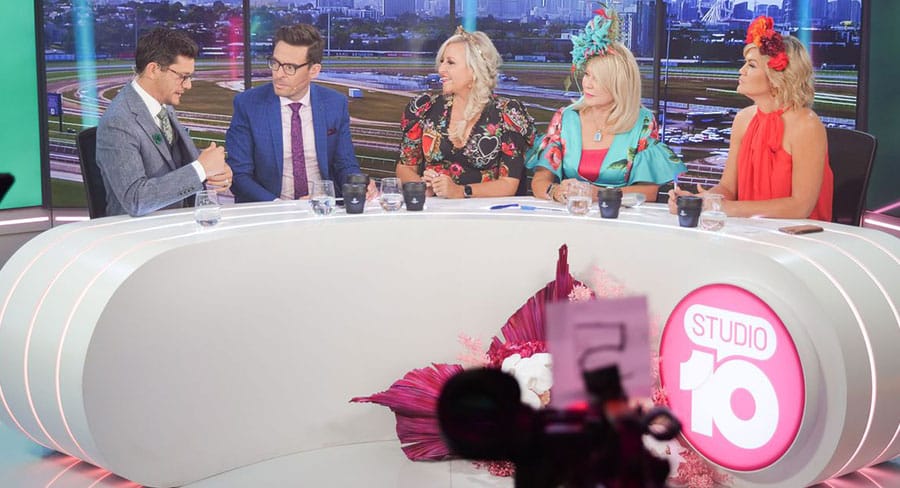 Crocmedia entertained guests on one level positioned near the main Bird Cage entry and seemed to be overflowing with advertisers and sports stars. Live entertainment was on offer later in the day.

Some of 10’s key execs and special guests managed to avoid the traffic snarls by arriving and departing in a chopper. The CBS-owned broadcaster was occupying much of Crown Towers this week with a helipad conveniently located just across the river.

10 CEO Paul Anderson hosted the 10 crowd and was on duty early and stayed until well after the last race. Much of his talent worked the room and the dancefloor as did many of the executives. Sales chief Rod Prosser was full of beans and is now halfway through a busy four Spring Carnival days of hosting clients and agencies. Prosser took time out to visit some of his corporate neighbours, including a trip inside the Herald Sun track tower. He was on duty too back at Crown later in the evening to host the after-party at the recently opened level three whisky and karaoke bar Ocean 12. 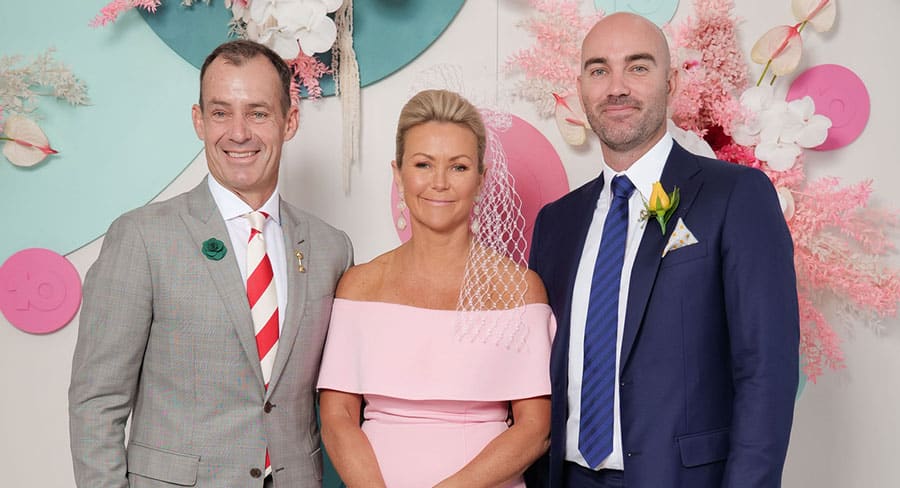 10’s national sales director Lisa Squillace had some early wins and looked a good person to follow for form. She generously shared part of several very detailed tipsters texts she was working from.

The newish comms minister Paul Fletcher spread himself around the Birdcage, but he did spend quite a bit of time at 10. 10 talent included all The Project team on duty that night, the new MasterChef judges, Studio 10 host who went to air earlier that day from 7am. One of the hardest working stars turned out to be Lindsay Lohan who spent most of the day in the party palace, finally taking her entourage away after 6pm and a pre-record with The Project’s Carrie Bickmore. Lohan said she was looking forward to The Masked Singer moving to Melbourne next year and she added the recording for 2020 could be happening sooner than we think! 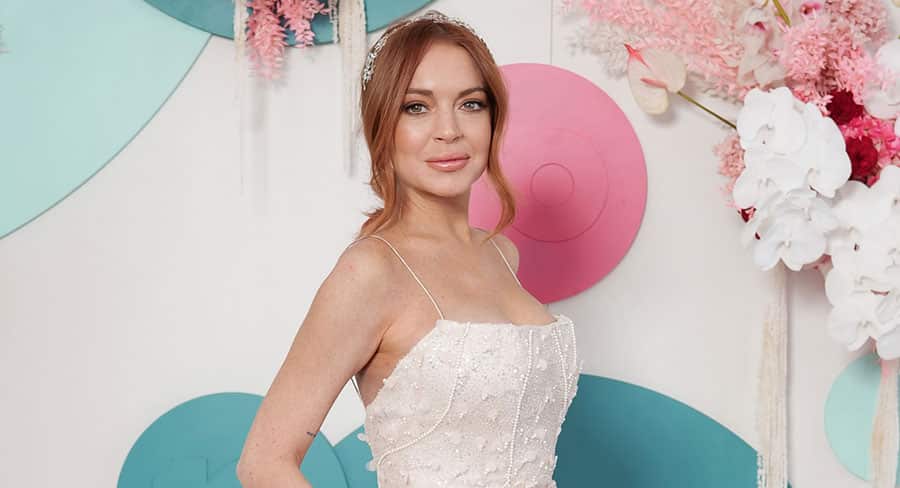 Mediaweek managed to sneak into the Herald Sun home after dropping the magic word at the entrance: “I’m here to see Peter Zavecz”. It is something that former well-paid Australia Post delivery man and NAB CEO Ahmed Fahour should have tried. He was stuck, momentarily, at the entrance, patiently spelling out his name for the reception team.

There was quite a fuss inside the corporate palace as photographers, professional and amateur, sprang to attention when the entourages of Anthony Pratt and Gina Rinehart arrived at the same time, both greeted by HWT chair Penny Fowler.

Outside the Herald Sun building later in the day, the prolific business columnist Will Glasgow was filing his Cup report for The Australian with his laptop balanced on his knees. His prose was ably accompanied by photographer Aaron Francis who easily had the best social portfolio on the day, including great images of Pratt and his golden shoes.

Away from the Birdcage hustle and bustle racing fans didn’t need any special passes to gather around the stables as Cup horses were prepared for the big race. The Herald Sun’s Andrew Rule (Underbelly and Winx author) was keeping an eye on what was happening and he fills pages 4 and 5 of his paper today. Former rights holder Seven got a cheeky pre-race interview with trainer Chris Waller, pity they couldn’t call it an interview with the Cup-winning trainer. Waiting patiently for a chat with Waller and a chance to meet race favourite Finche were Lord and Lady De La Warr, visiting from De La Warr Racing who operate from Buckhurst Park in East Sussex.

Mediaweek attended the Melbourne Cup as a guest of Network 10