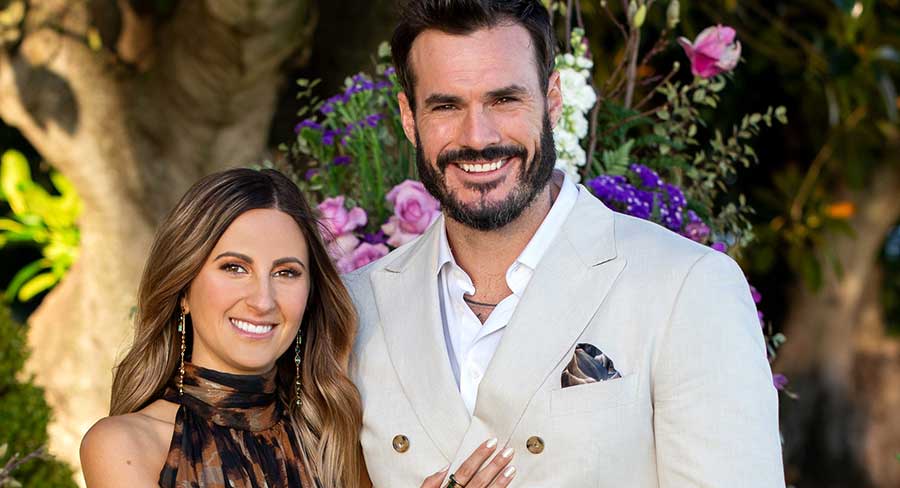 • The Bachelor was the #1 entertainment show of the night 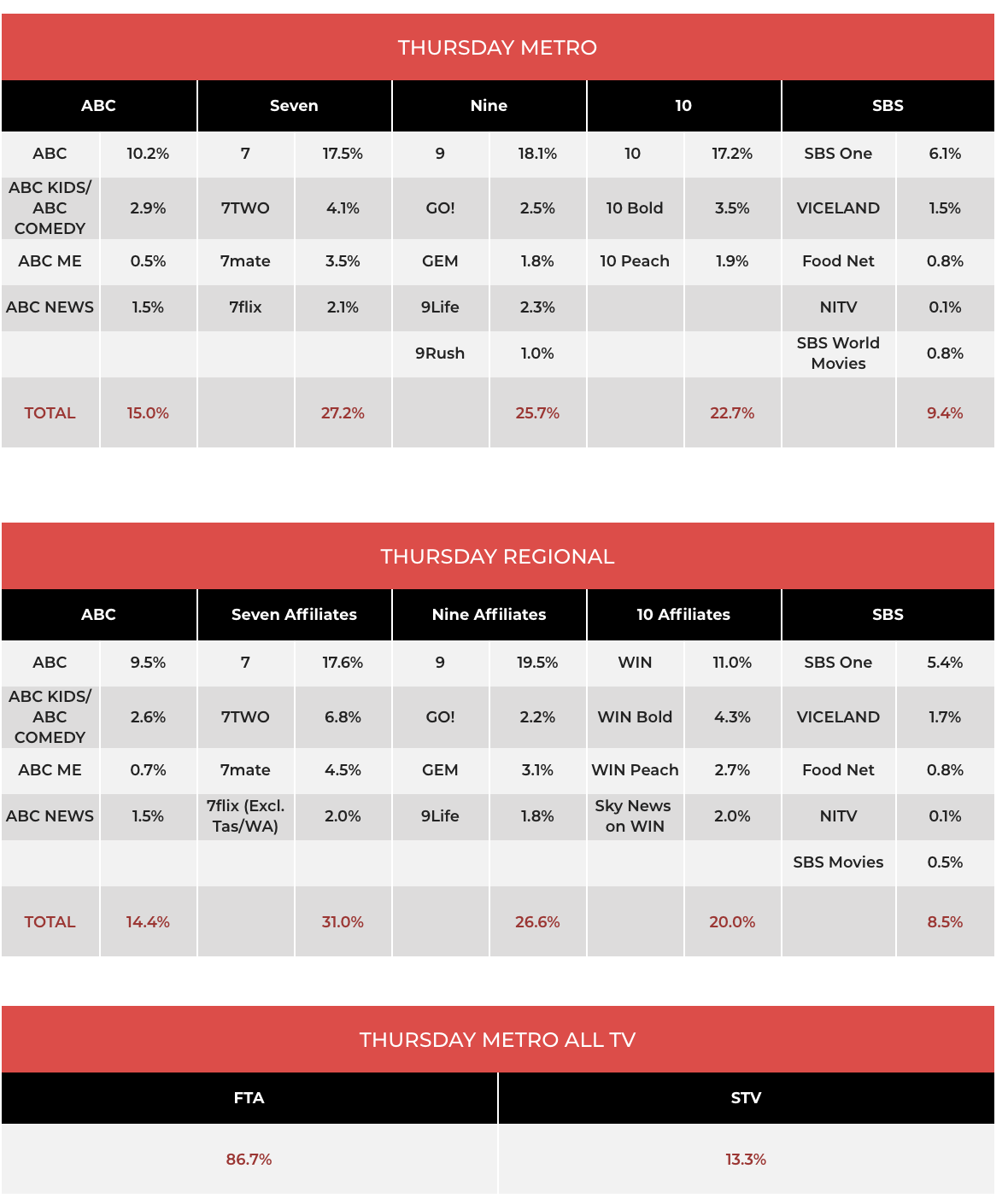 Some guides mentioned a Lindy Chamberlain spoiler would air in Sydney and Brisbane, instead viewers got the movie Pitch Perfect with 89,000 watching in those two markets.

The NRL featured an all-Queensland clash as the Broncos secured the Wooden Spoon for the first time as they were defeated by the Cowboys. The audience of 344,000 saw the biggest crowd in Brisbane – 161,000. Sydney was not far behind on 153,000.

Some of that audience tuning in no doubt stayed on for the season finale of The Bachelor as 879,000 watched Locky choose Irena. The first part of the finale was on 694,000. The audiences for the series climax last year were 936,000 and 1,170,000. Last night was the first time the Winner Announced has failed to crack 1m in eight seasons.

The list of achievements tough is long for what the 2020 final did last night:

“Locky’s search for love was a hit with Australians across all screens. The 2020 season of The Bachelor Australia dominated social media every time it went to air, recorded huge BVOD and live streaming numbers, and ranked #1 in its timeslot on broadcast TV.

“Thanks to the wonderful team at 10 and Warner Bros for their hard work and ingenuity in very challenging circumstances.

“Special thanks as well to our partners and sponsors for their incredible support and the highly creative and effective ideas and integrations they brought to this year’s series,” he said.

“Now that The Bachelor Australia has wrapped, we can’t wait to roll out The Bachelorette Australia, as sisters and best friends Elly and Becky Miles embark on their unique and very special quest for true love.”

Escape from the City followed with host Simon Marnie looking for a property in the Hunter region for the audience of 296,000.

SBS: Aussies are desperate to travel anywhere as present. The first international option might be New Zealand. With that still some time away viewers did the next best thing last night and flocked to The World’s Most Scenic Railway Journeys. A trip across the South Island attracted a bumper crowd of 390,000 for the series final. 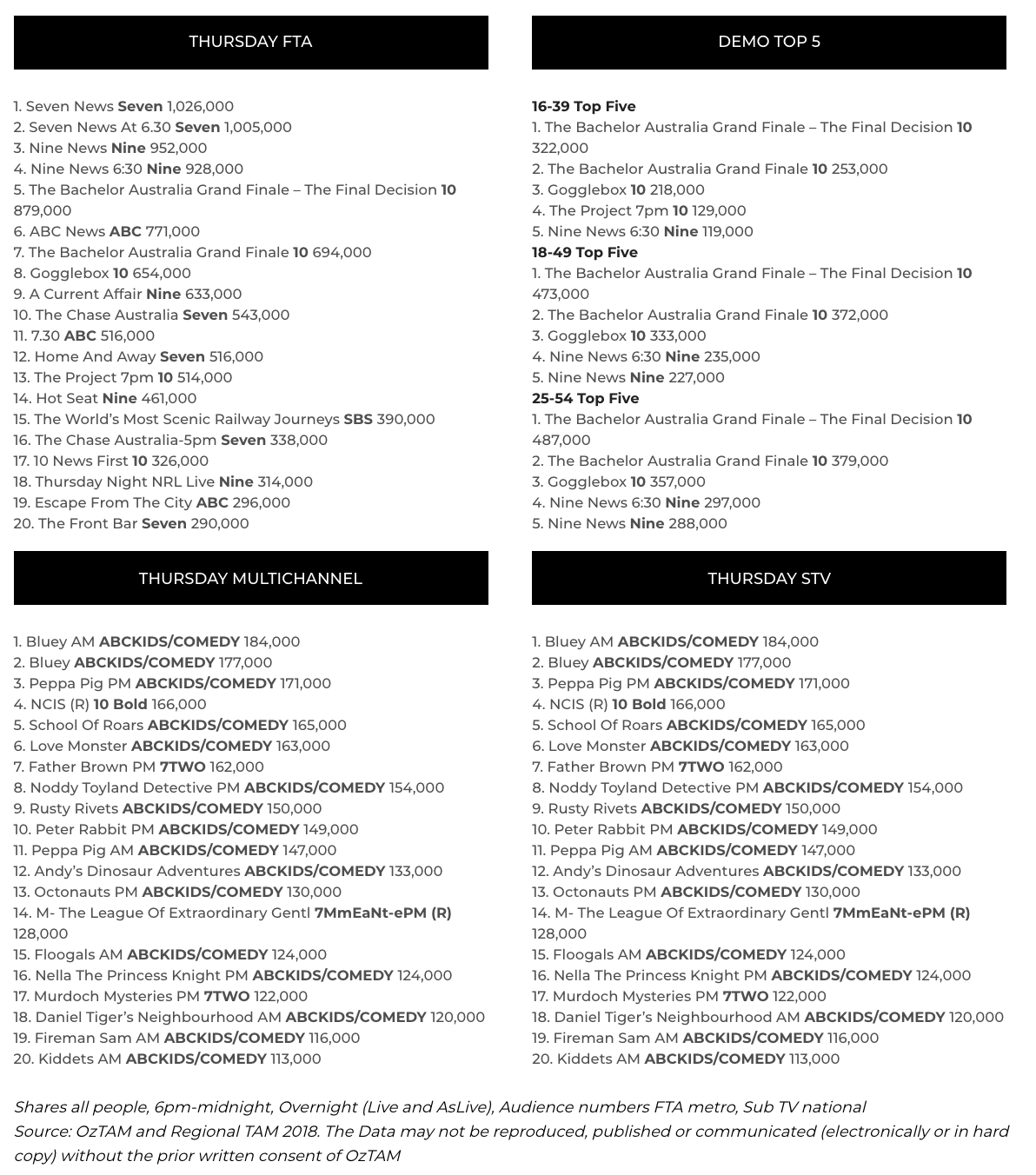