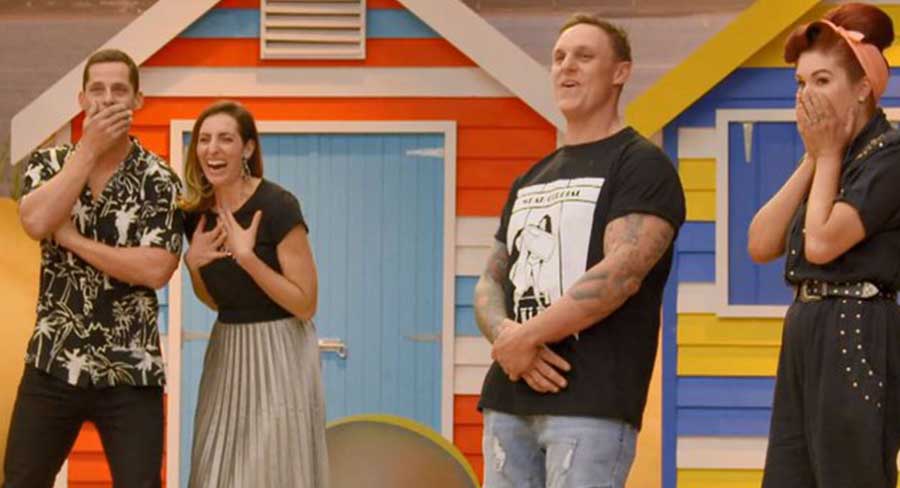 • Nine’s Sunday win: Peter Overton and Scott Cam steer channel to #1
• The Blockheads triumph over adversity with brilliant bathrooms
• All New Monty lifts Seven over 800,000 on Sunday after 7pm
• Murdoch Dynasty launches top 10 with over half a million

Seven: The second episode of All New Monty: Guys and Gals got a little closer to the much-anticipated climax. After 781,000 a week ago the episode was on 758,000 for the start of the episode and then 805,000 for the performance segment.

Crime Investigation Australia looked at the case of the Bega School Girls who were held captive in 1997. The episode was on 395,000 after 398,000 last week.

Crime night then continued with a Code Blue: Murder repeat at 10pm with 176,000 watching.

Nine: Despite a tough week on The Block, the contestants managed to deliver some impressive work with the master ensuites chalking up plenty of praise and accompanying high scores from the judges. The Sunday episode had an audience of 987,000/1,029,000 after 969,000/978,000 last week. The Nine promos are calling Monday night Covid shutdown announcement the must-watch episode of the year.

60 Minutes was heavily promoting the “best friend” of Melania Trump revealing what life was like in the White House. As an extra bonus viewers also got Peter Overton with Keith Urban in the program. The episode managed to pull a much-improved audience of 717,000 after 576,000 last week.

It was a big night for Overton, after hosting the Sydney 6pm news and then a key interview on 60 Minutes, he returned to the Nine Late News with 313,000 watching.

10: Rhys Nicholson was amongst the guests on The Project with 401,000 watching after 7pm.

The seventh episode of Family Feud featured nurses from the Bondi beach drive through testing clinic who took on the Turbans 4 Australia charity. The program was on 230,000.

ABC: The Murdoch Dynasty followed the news with 548,000 watching part one of the three-part documentary. The series has had mixed reviews, but it was pretty compelling viewing for some with a fascinating collection of interviews with commentators, former employees, critics, politicians and their staff.

The launch of season five of Grantchester featured scenes set in Cambridge as Will and Geordie became involved in campus politics after a student was found floating in the canal. The series launched with 517,000.

A Doc Martin repeat of season nine episode one then did 290,000.

The Michael Moore movie Fahrenheit 11/9 followed with the filmmaker touring the US as he examined the rise of Donald Trump with 148,000 watching.

The final night of the Tour de France started at 11.30am and had an audience of 76,000 tuning in to see an Australia in the top three for only the second time in the history of the race.