• As Bonnie Anderson was unmasked, 10 won all people + key demos

• The Masked Singer gives 10 its best night since MasterChef finale
• As Bonnie Anderson was unmasked, 10 won all people + key demos 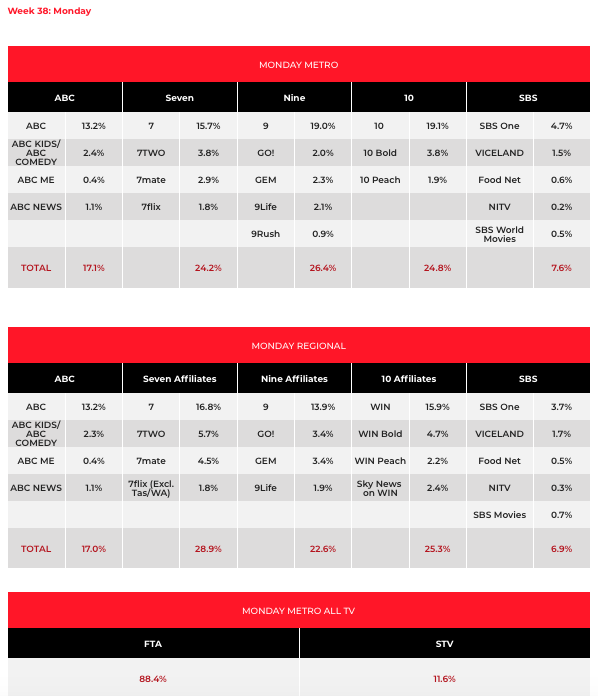 Seven: After The All New Monty got the Sunday slot, Plate of Origin carried on as the Monday reality franchise with the eight remaining teams ready to battle in the quarter finals. The audience was a series low 342,000 after 393,000 on Monday last week.

Nine: A Current Affair started its new week with Tracy Grimshaw welcoming viewers to a special edition about the mental health of children. Dimity Clancey started talking about teenagers and suicide with parents sharing their pain. The episode did 733,000 after a week 37 average of 677,000.

On The Block it was the start of master ensuite week. There will be more disruption later in the week connected with the spread of Covid-19 and its implications, but last night Keith was the focus for part of the episode as he wanted to kick Luke’s builder Macca off the show. As the teams had to try and organise ordering everything they would need to the rest of the entire build to avoid Covid-related shortages, Harry invited the teams over for a “winners are grinners” feed. The episode managed 791,000, close to last week’s 787,000 despite the final of The Masked Singer elsewhere.

Melissa McCarthy then featured in Celebrity IOU with 358,000 watching.

Footy Classified later had an audience of 111,000 in AFL markets.

10: The Project wasn’t the channel’s most-watched show last night after it drew 10’s biggest Sunday crowd. However at 7pm it had a respectable audience of 569,000 after a 7pm average of 505,000 last week. Monday guests included Dannii Minogue spruiking the finale of The Masked Singer.

The final of the mystery singing show followed with Bonnie Anderson being eventually revealed as the person behind the winning Bushranger mask. Along the way the other two finalists were revealed as Eddie Perfect and Kate Miller-Heidke. The audience watching the final was 1,191,000 for the reveal and 1,000,000 for the rest of the finale. In series one last year the reveal attracted 1,372,000 with 1,050,000 for the remainder of that episode.

On Have You Been Paying Attention? Lloyd, Kitty and Ash joined Ed and Sam. Ash London managed to win when the final buzzer sounded. Next week Network 10 and producers Working Dog are celebrating the 200th episode of the format. The audience last night of 767,000 was close to last week’s 764,000.

Anne Edmonds appropriately had several attempts at introducing Drunk History Australia. Edmonds eventually introduced Susie Youssef as Dame Nellie Melba with Darren McMullen as her French lover. Later in the show Harley Breen introduced the explorers Burke and Wills which reunited Osher Günsberg and James Mathison. The pilot episode for the series did 276,000.

ABC: Australian Story featured the Acast podcast Beenham Valley Road created to examine the death of young Queensland mum Kirra McLoughlin. The podcasters run Six10 Media, a Sunshine Coast based production company specialising in investigative podcasts and videography. Founded in early 2019 by former police officers Jamie Pultz and Tom Daunt, Six10 Media derives it’s name from the Queensland Police job code for community assistance. (Daunt has since left the business.) The first of a two-part episode did 615,000 and leaves many in anticipation of what will be revealed next week.

Four Corners then reported on soldiers of fortune – Australian mercenaries selling paramilitary services to warlords and despots abroad. The episode did 473,000.

Q+A investigated why so many people are lonely in a world where more people than ever are connected in different ways. The episode was on 250,000. 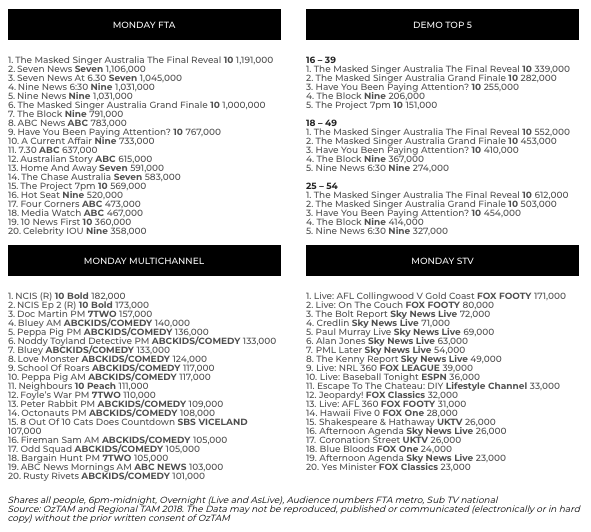