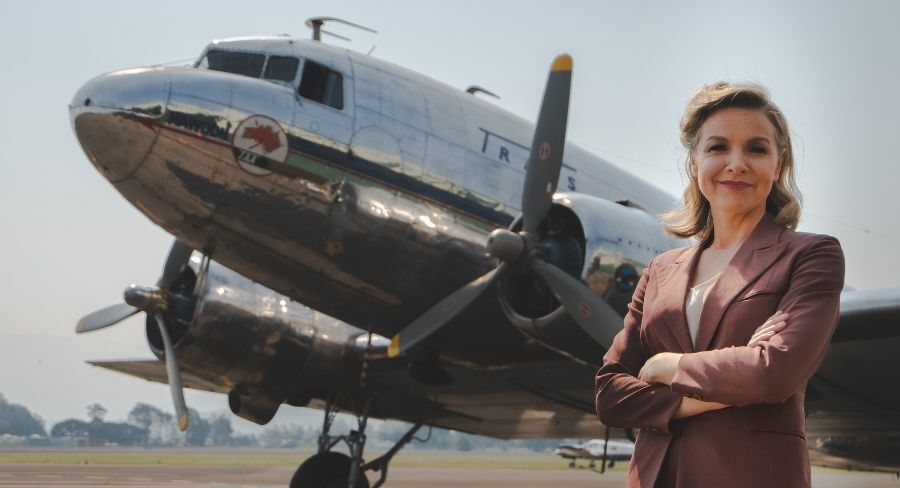 The history of flight is filled with danger and glamour, social injustice and opportunity. Just as it brought people together, air travel also revealed the cracks in Australia’s society. Over three weeks, Australia Come Fly With Me will celebrate the turbulent history of Australians in the air. 2020 marks 100 years of civil aviation in this country at a time when the industry is facing its biggest challenge due to COVID-19.

Hosted by actor Justine Clarke, the three-part series brings together pop culture and the history of flight, and explores how flight enabled changes in Australian life. The opportunities and tensions created by air travel are the context for struggles between sexes, sexualities and cultures that reflect and foreshadow changes that would follow on the ground.

Justine explores the struggles of women, Indigenous Australians, gay men and migrants to find a place in the skies. These stories are told by flight attendants and pilots and are brought to life by an archive of aircraft, people and exotic destinations. Australia Come Fly with Me invites viewers to take a trip into the past from the present perspective.

Justine Clarke said: “Australia Come Fly With Me has been an eye-opening, exhilarating series to be part of. I loved learning about the daredevils and dreamers who made flying possible – pilots who risked their lives, women who refused to accept the status quo and migrants who were making this country home. I hope this series informs and inspires Australians in equal measure.”

SBS director of television and online content, Marshall Heald, said: “Australia Come Fly With Me is a landmark television moment, celebrating the centenary of civil aviation. Social justice issues like gender equality, Indigenous representation, LGBTIQ+ rights and migration have all played out across history in the skies. Flying connected us with each other and the world and this series will remind Australians how it has shaped our nation.”

Australia Come Fly with Me is an exploration into one of Australia’s most diverse and important industries, and it asks the question: What will be COVID-19’s lasting effect on the country’s love affair with flight?

Australia Come Fly With Me will be subtitled in Simplified Chinese and Arabic, and added to the subtitled collection on SBS On Demand, available immediately after its premiere. It will also be available with audio description on the live television broadcast. Australia Come Fly With Me is a WildBear Entertainment production for SBS. Principal production investment from Screen Australia in association with SBS. Financed with support from Create NSW.

Australia Come Fly With Me airs over three weeks from Wednesday 14 October at 8.30pm on SBS.