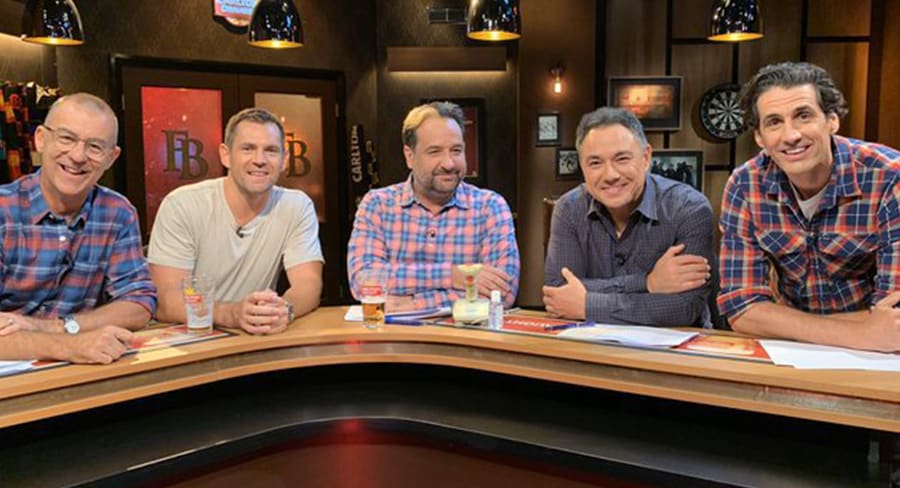 • Nine #1 with commitment ceremony on Married At First Sight

• Nine #1 with commitment ceremony on Married At First Sight
• The audience chooses: The Front Bar v midweek Footy Classified
• News and current affairs shows have biggest week for some time
• Should Seven late news be renamed The Coronavirus Latest? 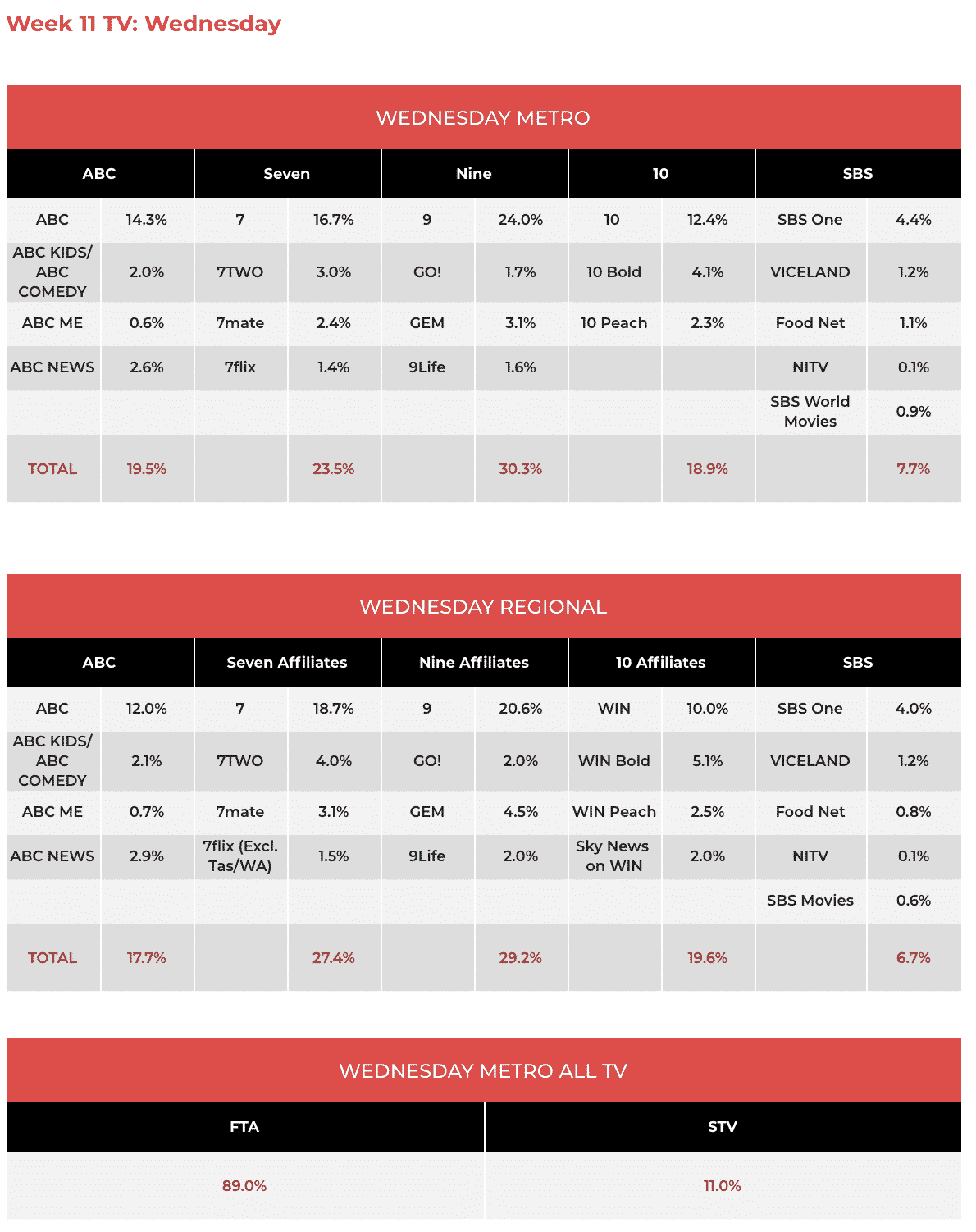 Seven News at 6pm has the edge still, but all five network news bulletins are posting bigger audiences.

News and current affairs shows are also doing their best numbers in some time – A Current Affair and 7.30 have each been above 800,000 every night this week.

Nine’s late bulletin has been over 600,000 each night. It has a much better lead-in, and a better name too. Maybe it is time for Seven to work Coronavirus into its title?

It was time for the final commitment ceremony on Married at First Sight with all five remaining couples deciding to stay in the show. The audience was again 1m+ on 1,077,000.

Nine’s new midweek edition of Footy Classified debuted last night. It was a pretty busy night for host Eddie McGuire. After being involved in discussions about the start date of the 2020 season earlier in the day, he guested on Fox Footy’s AFL 360, filmed an intro to the new Footy Classified at the MCG and then made it into the Nine Dockland’s studio to host the show. He was joined on the show by Caroline Wilson and Matthew Lloyd from the Monday program and former coach Ross Lyon made his TV analyst debut. The content was good, the ratings not quite so spectacular. That was partly because it started 90 minutes later than Seven’s The Front Bar in Melbourne. That is also a good thing – going head to head could have been bad news for at least one of the programs.

Seven’s Front Bar was the #2 show in Melbourne, only narrowly trailing the size of the 6pm news audience. The long break meant the writing team was stockpiling gags and it was a cracking Front Bar episode. Viewers had to wait until a little later in the program until new recruit Andy Lee took his place behind the bar. There was a studio audience of just two – some bloke and Sunrise’s Cash Cow.

10’s final Survivor episode of the week was going to be a formality with two versus four. AK was targeted at Tribal Council and a late intervention from the producers gave him a chance in a fire challenge to burn a piece of string. But he couldn’t quite match Moana’s fire skills and the final five is now all set for the final week. The audience of 714,000 was just short of Tuesday’s record. 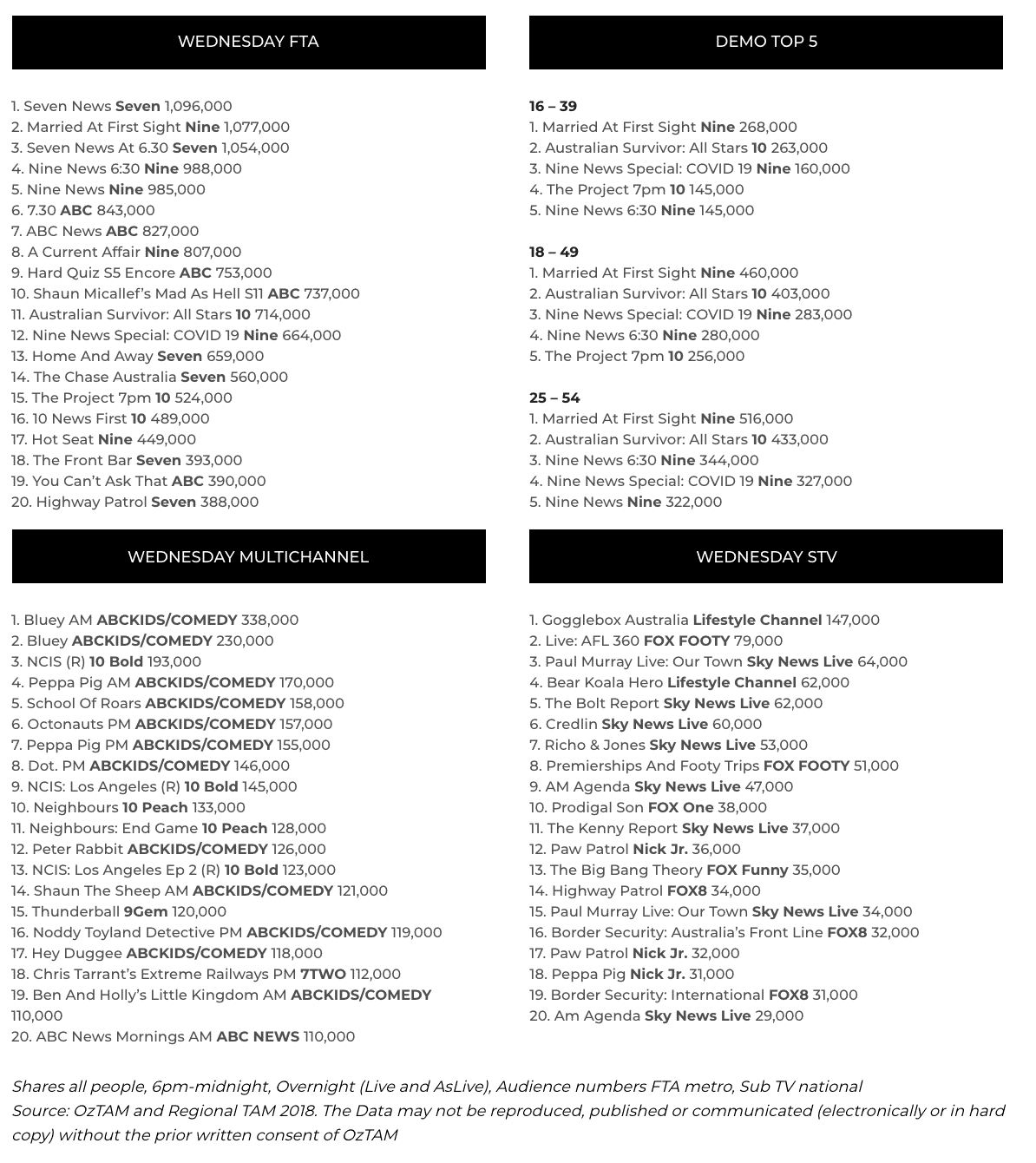