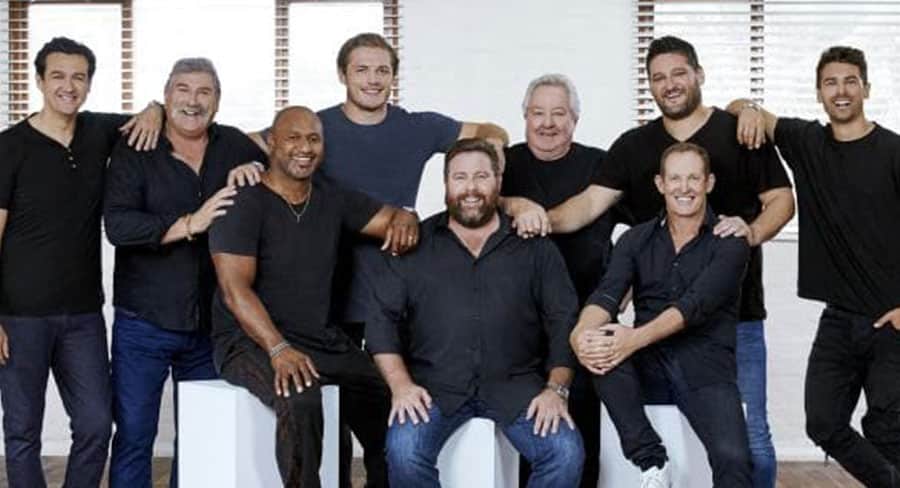 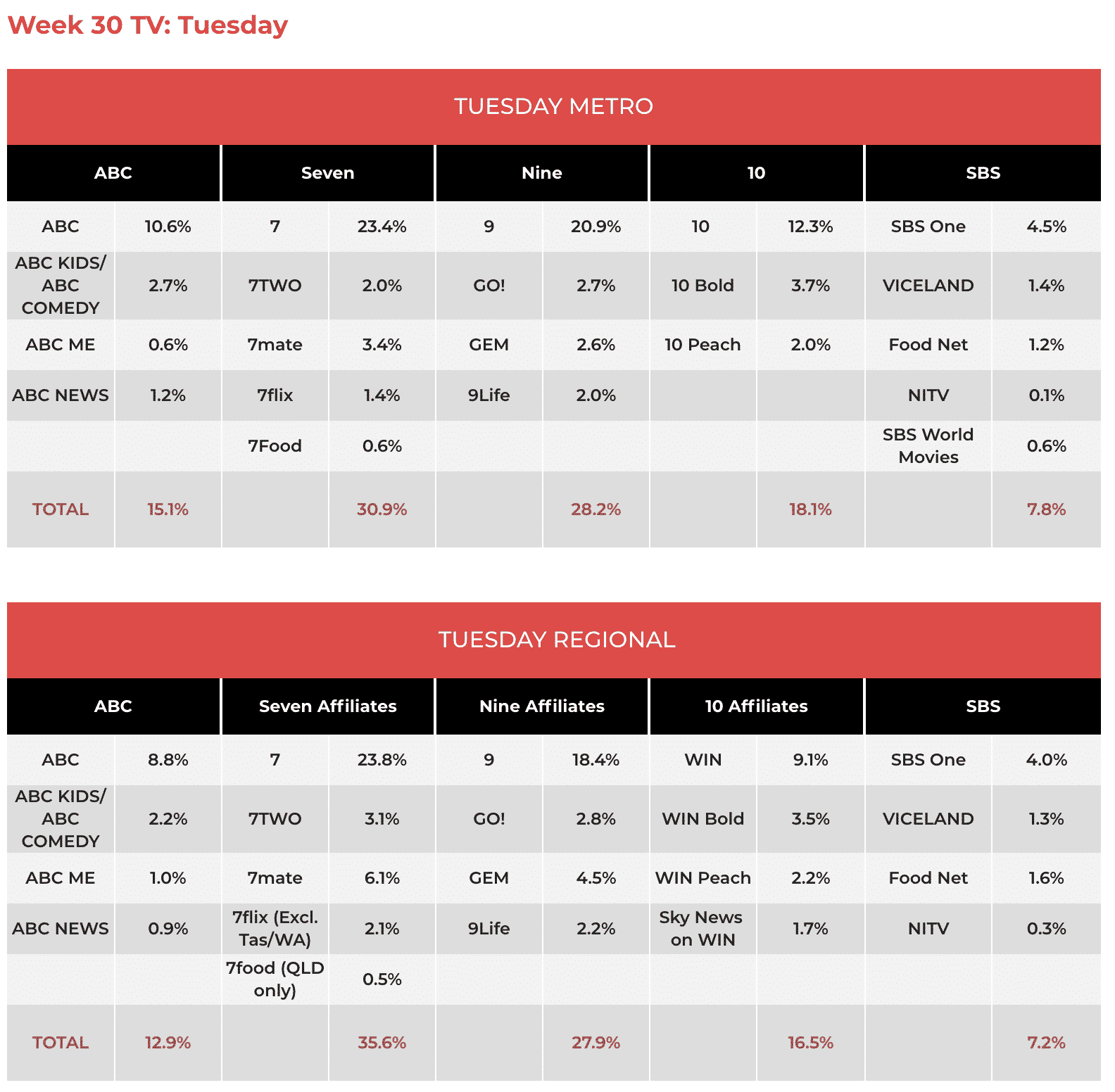 The evening then belonged to The All New Monty, which did very well to string out a short stripping scene with a two-hour back-story that kept a metro audience of 764,000 watching. Although the follow-up to last year’s Real Full Monty was the evenings #1 non-news show, the audience was down significantly on last year’s 1.027m.

The Melissa Doyle-hosted True Stories then did 427,000.

After the success of season three of Australian Ninja Warrior, Nine extended the franchise for one night with a rebranded Ninja Warrior Australia V The World. Originally screened as American Ninja Warrior: USA V The World on NBC in January this year, the special did 720,000 on Nine last night. The event featured teams from Australia, USA and Europe and was the first time an Australian team has featured in the US TV special that first launched in 2014.

Peter Helliar returned to The Project after a quick trip to Montreal’s Just For Laughs Festival. It was a change of pace for him though when he remembered his friend and colleague Richard Marsland who died way too soon 11 years ago. Helliar spoke to Marsland’s parents about his mental health problems and Sam Mac and Ed Kavalee recalled working with the broadcaster and comedy writer. After Pete and Carrie shed tears on the set, it was a tough time for Ross Noble to come on and be funny. Earlier on the show devoted a (relatively) massive slab of time to the new Fast & Furious movie and Nova Peris talked about being voted out on Survivor. After 496,000 on Monday, The Project did 494,000.

It was another horror night for The Champions on Australian Survivor. They won the reward challenge, but they then again lost immunity for the third time in a row as Steven Bradbury became their latest member to be voted out. The audience of 641,000 was down a little on Monday’s 655,000, but the Tuesday ep was a winner in all key demos.

Benjamin Law’s Waltzing With The Dragon launched the first of two episodes with 364,000 watching Benjamin and his mother tracing Chinese-Australian history. 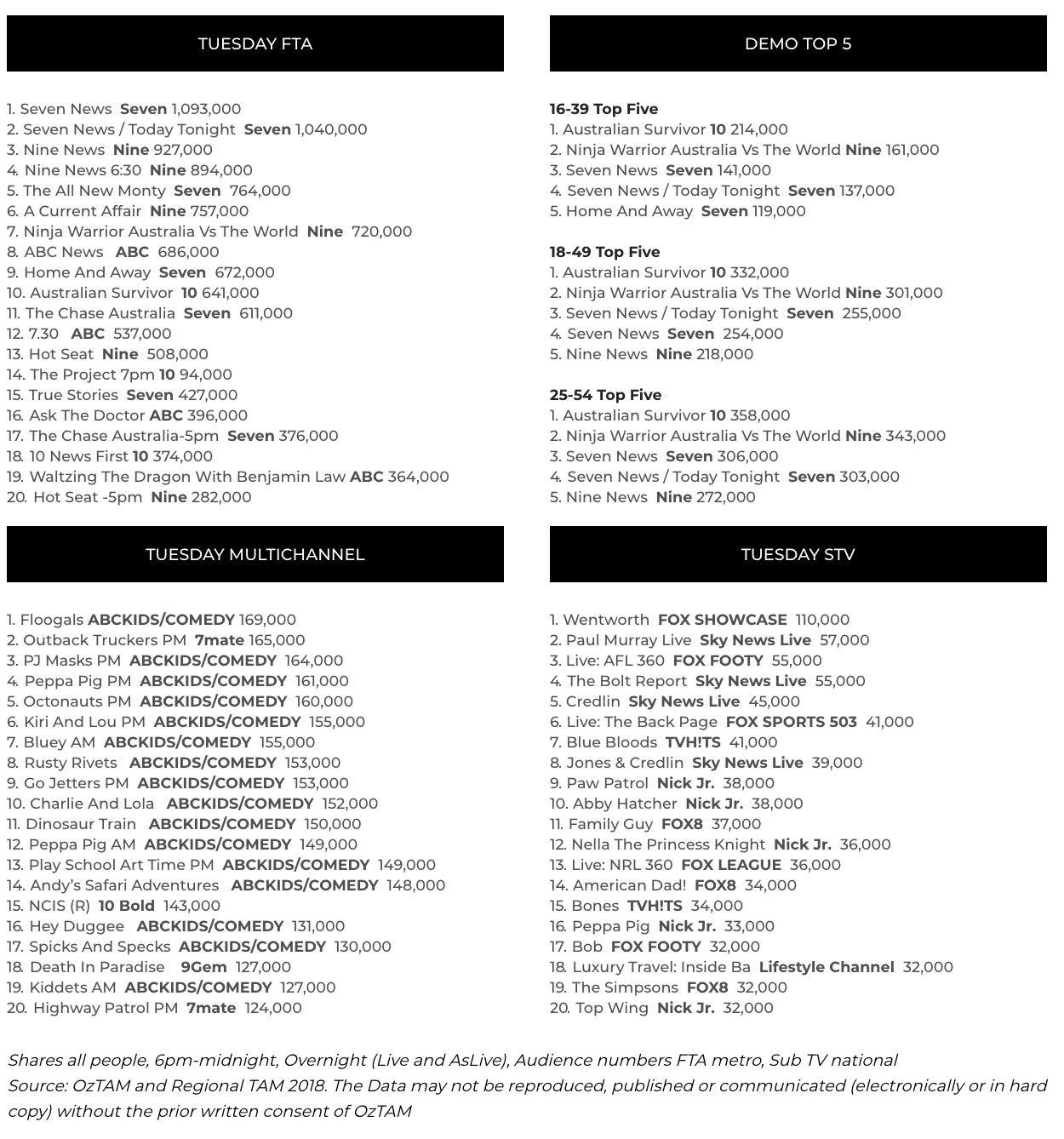