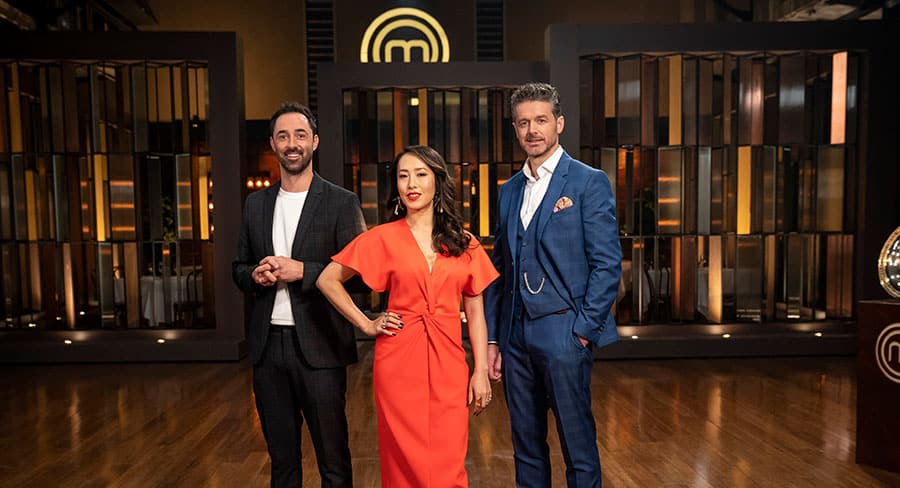 • Best of the rest: Home and Away, RBT, Grand Designs, The Tower

• 10 secures first place with MasterChef, Masterclass, Gogglebox
• Best of the rest: Home and Away, RBT, Grand Designs, The Tower 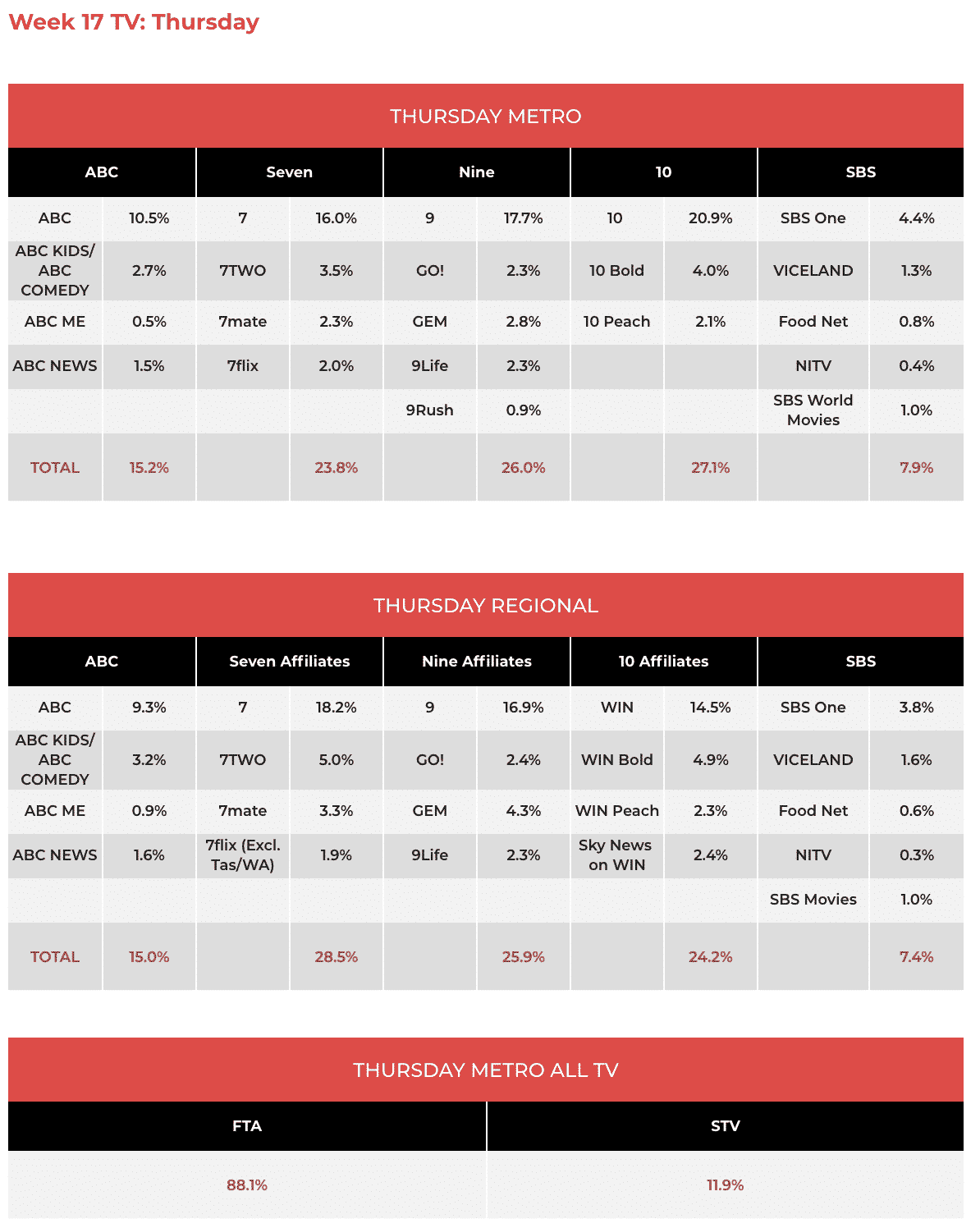 10: The channel has worked hard this week to keep momentum from the Easter break and it managed to win Thursday with its line-up of two hours of MasterChef/Masterclass and then Gogglebox.
The hosts of The Project wore tributes to police last night and one of their guests was Victorian Police Chief Commissioner Graham Ashton. Kate Langbroek was also on the line from Italy. The show had a strong audience of 459,000 at 6.30pm (biggest in close to three years) and then pushed to 636,000 after 7pm.
MasterChef featured a five-way competition to get immunity on Sunday night. The good cooking featured during the week continued with Sarah last night who wowed the judges and it safe on Sunday. The episode did 1.028m with a second consecutive Thursday episode over 1m. The first Masterclass of the year saw the contestants getting to work on some dishes. The Masterclass was on 802,000.
Gogglebox subsequently started a little later which saw the audience drop week-on-week from 874,000 to 601,000. That was still enough to have the penultimate episode of the first season for 2020 win its timeslot.

Nine: A Current Affair was just under 800,000 with an update on $100,000 of goods for the Great Australian Giveaway.
A show about police keeping the roads safe took on extra meaning last night as RBT had an audience of 534,000.
The James Bond film Spectre then did 309,000.

ABC: 7.30 featured an interview with departing Rugby CEO Raelene Castle with host Leigh Sales alluding to reasons why some people wanted Castle out. Shock jock Campbell Parkes also made an appearance with thoughts about Coronavirus and Malcolm Turnbull’s book. The episode did 655,000.
The Heights followed with 269,000 and then Grand Designs Australia on 406,000. 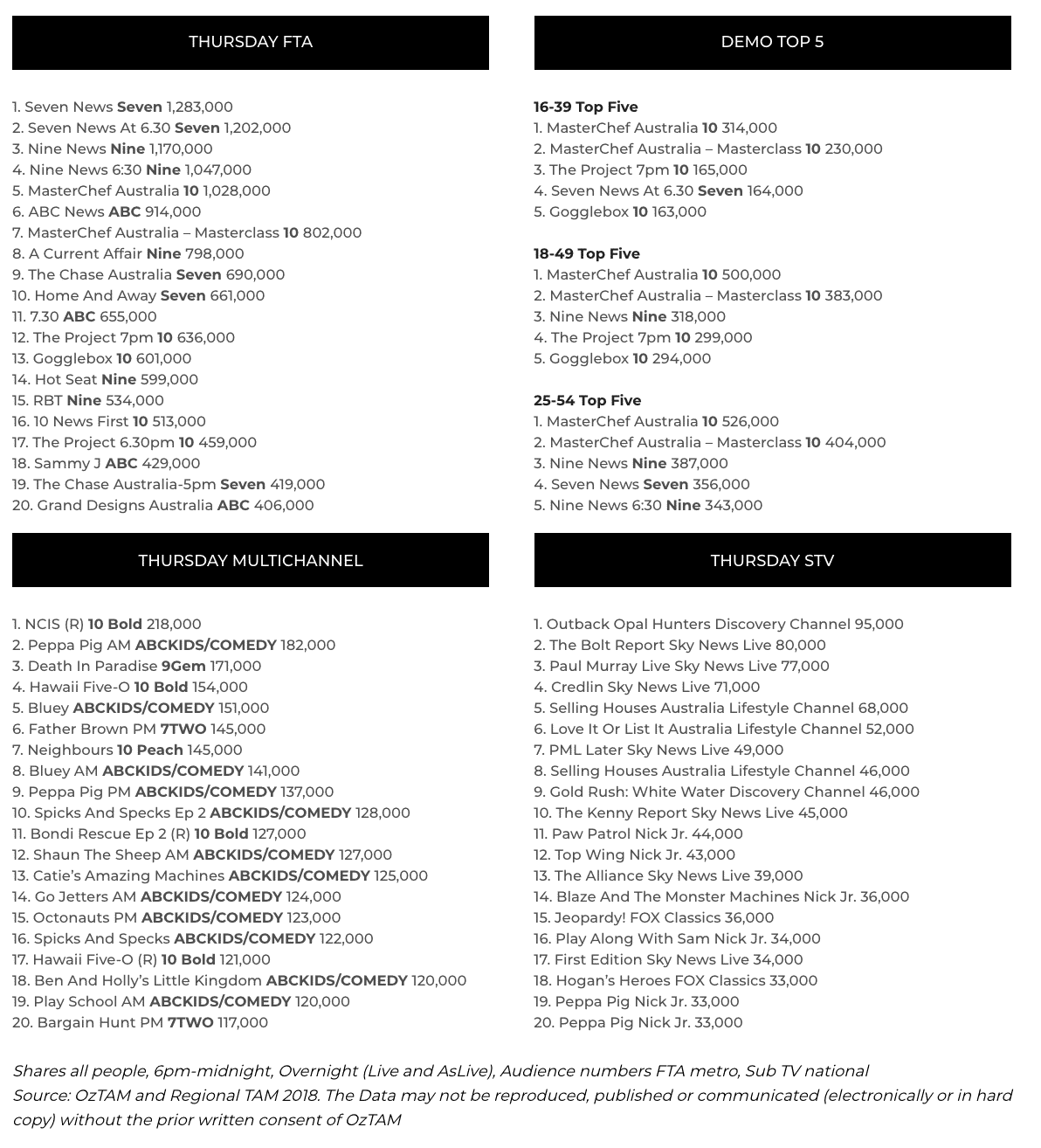