• In a gold Mystery Box challenge, Tessa made it into her first immunity challenge 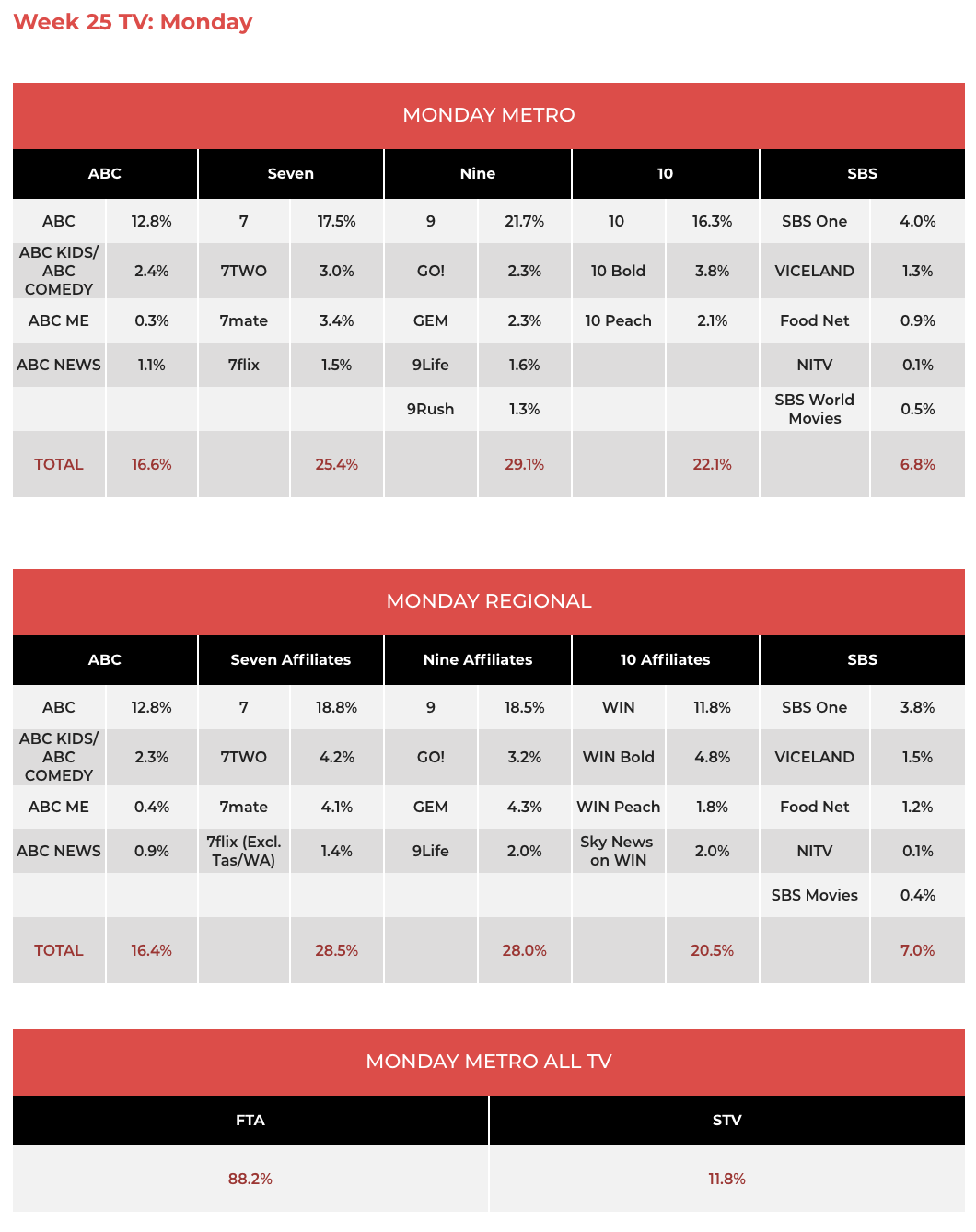 Seven: Home and Away started its week on 664,000 after a week 24 average of 667,000.
On Big Brother Kieran was given a small motorised vehicle and a purpose-built area in the backyard to complete a 3-point turn to Big Brother’s satisfaction, within an acceptable time frame and with minimal damage to the vehicle and surrounds. The reward was pizza for all, except Kieran because he damaged the wall.
The evicted housemate was Danni Keogh from Townsville who attracted 11 of 16 votes. On her way out Danni said: “I think I was playing a great game, I really thought I was good at it. I’m so confused about what went on tonight. I could be completely wrong and my game play is completely off but if my gut and my intuition is right, I believe it was Kieran. Kieran might have been that snake.”
The Monday Big Brother did 655,000 for the eviction and 658,000 for the start of the episode. On Sunday night Big Brother was just under 700,000 for both parts, while a week ago it launched on Monday with 862,000 and 931,000.
The US drama 911 then did 309,000.

Nine: The Voice did 941,000 after 848,000 on Monday a week ago. Despite the growth last night it was still outrated by MasterChef.
It was the final episode of the Blind Auditions with the episode starting with a full house of vocalists for Teams Boy George and Guy. That didn’t stop Guy from picking an extra singer as the others were about to pass on him. (“Cheating scandal”!) Delta quickly picked up an all-star to fill her team while Kelly agonised over her final two but eventually got there.
Earlier in the night A Current Affair featured the story of a surfing influencer Blade Roberts on the Sunshine Coast who had her Instagram account hacked with porn images while Instagram refused to help her get back control of her account. The episode was hosted by Deb Knight and had an audience of 811,000 after 718,000 across week 24.
Later in the night part two of Queen – Days of Our Lives was on 378,000 after part one was on 345,000.
In AFL markets Footy Classified had an audience of 95,000 with 70,000 watching in Melbourne. In NRL markets 100% Footy did 66,000 with 41,000 in Sydney.

10: Khanh was a special guest to end The Project where he managed to slip in a plug for his new book A Gay Guy’s Guide to Life Love Food. The episode did 578,000 after 7pm.
The winner’s trophy was on display for the top eight left on MasterChef after they learned that one of them would be going home every week from now one with just three episodes each week. In a gold Mystery Box challenge, Tessa made it into her first immunity challenge, along with Brendan, Reece and Callum. The Monday episode did 954,000 to rank #1 non-news after 855,000 a week ago.
Have You Been Paying Attention? then managed to just sneak over the 800,000 mark after 767,000 a week ago.

ABC: Leigh Sales was at her best grilling Albo on 7.30 with 648,000 watching.
The second episode of Heather Ewart’s Nullarbor journey on Cross Roads did 678,000 after launching with 650,000 a week ago.
Four Corners featured a PBS documentary called The Age of AI with 530,000 watching.
Media Watch then did 515,000 with had a special interview with former ACT attorney-general, lawyer Bernard Collaery, who’s at the centre of a secret trial the media can’t cover. The episode had an audience of 515,000 after 455,000 a week ago.
Q+A featured sports administrators and journalists talking about the future of sport to an audience of 242,000, the smallest audience of the year. 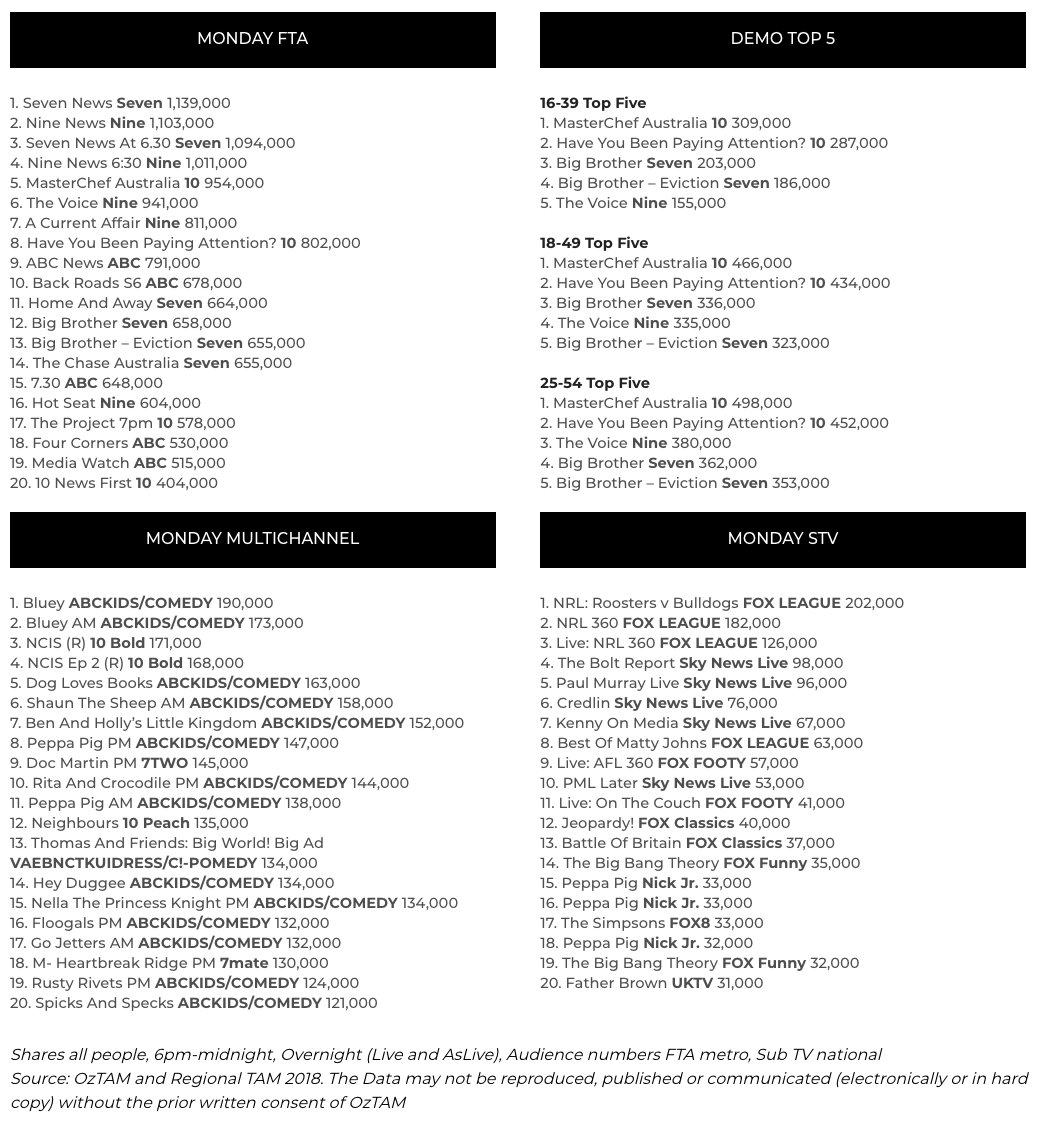