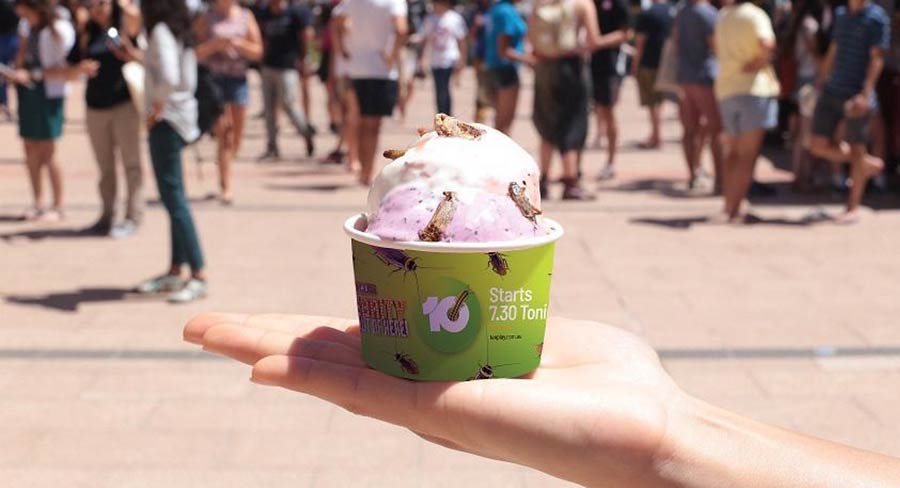 Network 10 has detailed its marketing campaign for season five of I’m A Celebrity…Get Me Out Of Here! The new season starts on Sunday 13 January 2018, two weeks earlier than previous seasons, going head to head with Nine’s Australian Open. On premiere day, 10 will take to the streets to give people a taste of the celebrity jungle life…literally! Pop-up ice cream carts will roam high traffic locations in Sydney, Melbourne and Brisbane offering free jungle ice cream. Flavours will include Strawberry Squirm blending strawberry and vanilla ripple with crickets – yep, crickets! – and Snake in the Mud mixing chocolate ice cream with lolly snakes. The carts will appear at Bondi Beach and Chatswood Mall in Sydney, St Kilda Beach and Federation Square in Melbourne and Queen Street Mall in Brisbane.

Network 10’s head of marketing and social media Brad Garbutt said: “Summer doesn’t always have to be just about sport on TV. We know audiences appreciate having a variety of TV viewing options and by launching I’m A Celebrity…Get Me Out Of Here! earlier we’re giving our under 50s audience a light-hearted and fun entertainment alternative across this period.”

Network 10 worked with Spark Foundry and Carat to launch the campaign.

Trish Ramsay, a media industry veteran of over 30 years and a long-term Network 10 employee, passed away peacefully last Saturday (5 January) after less than a year battling cancer. Trish has been remembered by her colleagues for her dry sense of humour, her deep knowledge of the media business, her outstanding recall of all things free-to-air television and the exceptional patience and generosity she displayed to everyone with whom she worked.

Network 10 chief executive Paul Anderson said: “With her talent, experience, wisdom and kindness, Trish was an invaluable part of the Network 10 team for many years. Her knowledge and connections across the TV industry and broader media sector were second to none. She was a wonderful colleague and friend to many, many people at Network 10 and she will be sadly missed.”

Former colleague and good friend Sarah Keith, MD of Publicis Media Exchange, said: “I was so proud to know you, work with you and be your relentless walking buddy.”

Marketing and media executive Joe Pollard said: “Trish was my first boss in the typing pool at JWT in 1984. She was the chief secretary at the top of the cubby row. She wasn’t in the pool but the boss of us all! A beautiful person and a wonderful friend taken from us too soon.”

Southern Cross Austereo chief executive Grant Blackley said: “I had the absolute pleasure of working with and being entertained by Trish the Dish as she was affectionately known from early in her career. We worked together at Network 10 for many years and Trish was always an inspirational, committed and highly professional executive who always had her clients’ interests at heart. To that end, she enjoyed a wonderful relationship with each of her agencies and clients, who could always rely on her delivering the best possible outcome regardless of the challenges.

“Trish had a wicked sense of humour which she put to work often, entertaining those she worked and others she came into contact with. Her loyalty was without question, but she never suffered fools and always praised the strong and the willing,” he said.

“Trish was enormously competent and this served her well in both her private and professional life. Trish earnt many accolades in her career across numerous years, but her greatest achievement must be raising her son Cooper into the most beautiful young man after her late husband Andrew’s passing. Our thoughts and prayers are with her family and friends and we should all feel stronger knowing Trish touched each of us in so many wonderful ways.”

SBS media sales director Adam Sadler said: “Trish joined the SBS family in 2009 to manage the single largest sporting event in the world, the 2010 FIFA World Cup. From the moment Trish entered SBS, I remember her calm, rationale and compassionate disposition. She had a worldly magic about her that always made our team smile and trust we were in good hands. She will remembered in the hearts and minds of the SBS family always.”

Trish is survived by her son Cooper Jacob.

Breakfast TV wars: Last Today before relaunch. Who caused Nine’s breakfast woes – Karl or Kochie? And how big is the gap?

He has been co-hosting Nine’s Today show this week, but regular breakfast TV sports guy Tim Gilbert is the latest departure for the much-maligned breakfast show. He hosted his last episode Friday morning.

Today relaunches on Monday with new co-host Deborah Knight joining Georgie Gardner while Tom Steinfort will be the breakfast newsreader.

The new Today show sports reporter is Nine Melbourne’s Tony Jones who will be juggling his 5.30am starts with Nine’s Melbourne evening news bulletin between 6-7pm.

Much has been written about the Today show slump, but how far has it fallen and what does the road back look like?

In week two this year the metro numbers for the Nine v Seven breakfast battle looked like this (Metro and then Sydney-Melbourne):

There was not a lot separating the two shows on Monday and Tuesday this week, but there was a wider gap on Wednesday. Sunrise has the edge in Melbourne, but in the Sydney market Today has won two mornings this week.

Sunrise’s biggest plus is its numbers in Adelaide, Perth and regional markets.

Much of the analysis over the past few months has been centred on the poor performance of Today and how that has been largely the fault of Karl Stefanovic.

Although this won’t be a new flash for all, one reason Sunrise has done so well is because for many viewers it is a better program. From hosts David Koch and Sam Armytage, to newsreader Natalie Barr, sports guy Mark Beretta, weather reporter Sam Mac, its international reporters led by Hugh Whitfeld and Ashlee Mullany and EP Michael Pell (who celebrates a decade in charge this year) and his team.

TV cooks: There used to be just one My Kitchen Rules – suddenly it’s being franchised

For the first 10 years of its life Seven has carefully guarded the My Kitchen Rules brand, making sure it didn’t overcook the format’s attraction, stopping short of ever running more than one series annually.

The number of episodes was more than doubled after the first year, but it has not expanded too much since then…until now.

This year there will be two seasons of the show. The regular series this year is the 10th anniversary of the format.

And then later in the year a special shorter season featuring some of the best cooks over the past decade.

In the meantime the program is screening a special Best Of episode next Tuesday, January 15 at 7.30pm, ahead of the January 28 premiere of the 10th anniversary season on Seven.

If that’s not enough, the Seven is expected to screen some of the international editions of the MKR format on 7Food during 2019.