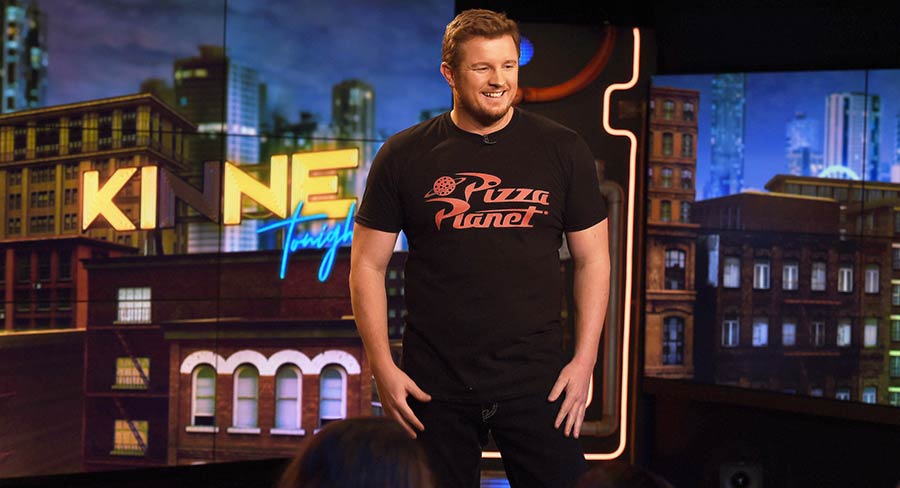 • Kinne is in the middle of production of six new episodes.

Asking Troy Kinne if he was nervous about the launch of his first season of Kinne Tonight after winning 10’s Pilot Week last year seemed almost a bit rude to this young, yet seasoned performer.

“How do you feel ahead of the launch,” Mediaweek asked instead. “Nervous” he shot back quick as a flash.

“I have gone from nervous and anxious, and drifted into confidence and excitement. Having finished some episodes I think it’s half decent and I want some people to see it.”

And tune in they did. The first episode of Kinne Tonight last week did 392,000 metro viewers, slightly bigger than his Pilot Week crowd.

Kinne is in the middle of production of the six new episodes.

Asking if Kinne was surprised about his Pilot Week performance also seemed a bit rude.

“How did you feel about those ratings?”

Troy Kinne used to make videos at high school borrowing the library camera. “I used to show them to just my parents and next door neighbours. For me to be able to reach so many more people is something I find hard to fathom.”

Kinne started stand-up 15 years ago. He’s been a fan of many classic TV performers from The Late Show to The Comedy Company. But it’s a different world now.

“We are in a phase now with YouTube where we are transitioning. You can either embrace social media or fall by the wayside.

“I used to have to watch Seinfeld when it was on or you didn’t see it. Now even friends of mine ask if there will be some of my show online. I have to say to the, ‘Try and watch it went it’s on.’”

There have been two people in particular who helped get Kinne on TV. More recently he points to 10’s Paul Leadon. “I have to give him credit, and I don’t see tis much in Australia, he came to my Sydney show and saw the reaction from my fans. He made the effort to understand my comedy and he got it.”

Before impressing 10’s Pilot Week audience, Kinne polished his TV skills with two seasons on 7mate in 2014 and 2015. “They seemed to be experimenting on the channel and they let us have free reign with very little interference.”

Kinne credits MaryAnne Carroll for kick-starting his TV career. “We worked so well together at Seven. I did a sketch show pilot for Seven before working at 7mate. It didn’t go ahead after initially looking like it would.

“MaryAnne Carroll got sent one of the early videos we did which was a parody of a Kia commercial. She got in touch with my manager about making a pilot. I said I’d already done one and wasn’t going to waste my time again. My manager talked me into doing it, luckily.”

His TV experience makes Kinne feel more confident about what works “When we did the Seven show there was a TV audience and an internet audience. Now I think they are both the same.”

The audience now has a shorter attention span. “If I see a clip online over three minutes I probably wouldn’t press play on it.”

Working the TV audience is different to performing live, explained Kinne. “For the TV audience you have to warm them up a bit more. You have to tell them it is just like being at a stand-up performance. They are allowed to make a noise and react. It’s OK to let loose. Whereas people at a comedy club are there for exactly that.”

An episode of Kinne Tonight moves so quickly the audience never has a chance to get bored. The first episode had about 10 different setups in just over 20 minutes of show time.

“In a pitch for the show we had a note there was ‘no fluff’. We only do intros when a sketch needs it. We jut go straight to the content all the time. Never give the viewer a chance to reach for the remote.”

Between the “longer” sketches, Kinne drops in one liners, or “short bursts of energy” as he calls them.

He noted that writing and filming the shorter pieces can be more of a challenge than the longer sketches.

Although Kinne Tonight goes to air quite late on Mondays, he has no complaints about the timeslot, coming off the back of Have You Been Paying Attention?

Kinne Productions is the vehicle for his TV and live shows. He is also getting into merchandise and has also published a book about one of his characters.

Kinne is looked after by Lauren Bergman alongside people like Red Symons, Glenn Robbins and Eric Bana.

For the rest of 2019 Kinne is planning some live shows – in Australia and perhaps the US if he can organise it. He played several shows in the UK last year.