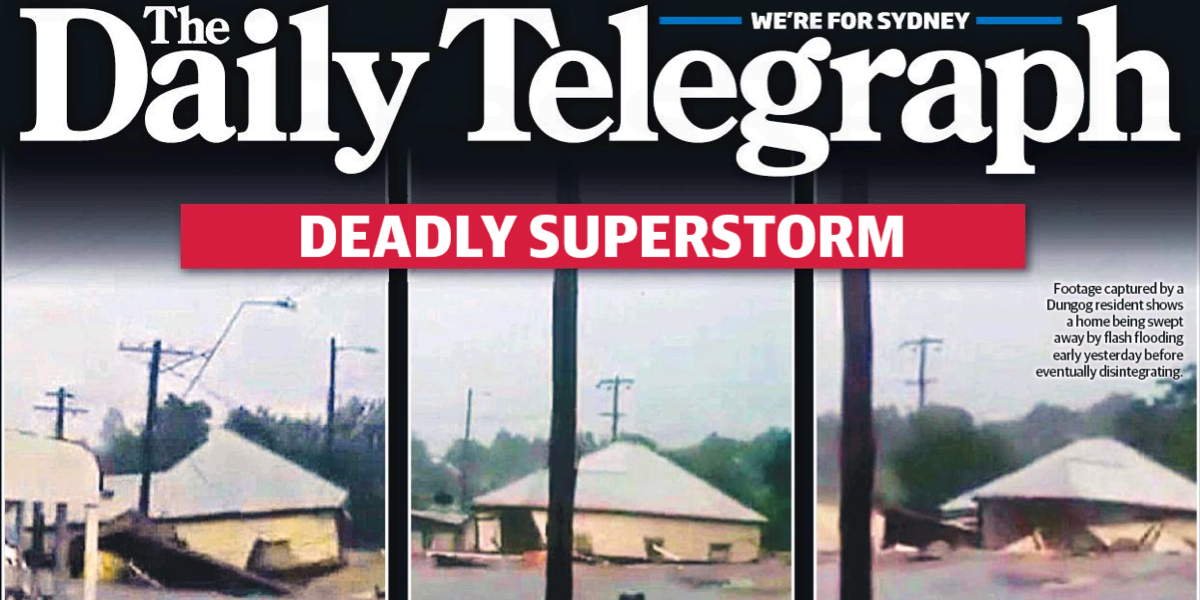 The Daily Telegraph, Commonwealth Bank, Crown Resorts, Qantas, Woolworths, Telstra and the Seven Network have come together to support NSW communities affected by the devastating storms that hit the state this week.

One dollar from the sale of every copy of Wednesday’s The Daily Telegraph will be donated to the NSW Storm Appeal, with all proceeds given to The Salvation Army whose response teams are on the ground supporting Emergency Services personnel and evacuees. The funds will be used for direct assistance in the form of cash grants, vouchers, services and goods to help those affected.

News Corp Australia has made a direct donation of $10,000 and, along with the Seven Network, has provided significant media inventory to support and promote the initiative.

NSW businesses and the community can also support those affected by storms by making a donation to the NSW Storm Appeal at any Commonwealth Bank branch or via online banking, or at your local Woolworths.

News Corp Australia NSW state director Brett Clegg said: “The past few days have been incredibly challenging for parts of New South Wales. We are all moved and inspired by the incredible stories of the spirit and resilience in the affected communities. I am delighted that we are able to come together with our corporate colleagues to support the outstanding work The Salvation Army is doing on the frontline.”

Commonwealth Bank Australia CEO Ian Narev said: “It is now time for the community to rally around the people affected by these devastating storms. As we are a part of that community, we want to help by supporting the NSW Storm Appeal – and in particular, the people of the NSW Hunter region – where, tragically, lives and homes have been lost.”

Qantas Group chief executive officer Alan Joyce said: “People across New South Wales and particularly in regional areas have had their lives upended by these storms. As the national carrier, we want to help.”

Seven Network CEO Tim Worner said: “This is an important initiative by News Corp Australia and Seven News is proud to support it. With so many families suffering we should be doing all we can as a city to help them get back on their feet. Give what you can and lend a hand where you can. Together we can make real progress.”

Crown Resorts chairman James Packer said: “This has been a terribly difficult week for many in our community. As a state it’s time to rally together to help the thousands of individuals and families who have suffered so much during these storms. I urge NSW businesses and the community to get behind The Daily Telegraph’s campaign.”

Woolworths Supermarket director Dave Chambers said: “Woolworths is proudly a large part of the communities that have borne the brunt of these terrible storms. We send our thanks to the workers who are tirelessly helping these communities, many of whom are our customers and Woolworths team, to get on with rebuilding. I’d encourage anyone who would like to join with us in making a donation to do so in any of our New South Wales stores from Sunday.”

The Salvation Army’s Major Bruce Harmer said: “The Salvation Army is grateful for the leadership of The Daily Telegraph and their corporate partners. With their support we will assist those affected by the recent devastating storms. With this generous support, The Salvation Army will continue to provide practical assistance and hope for anyone who may need a helping hand.”