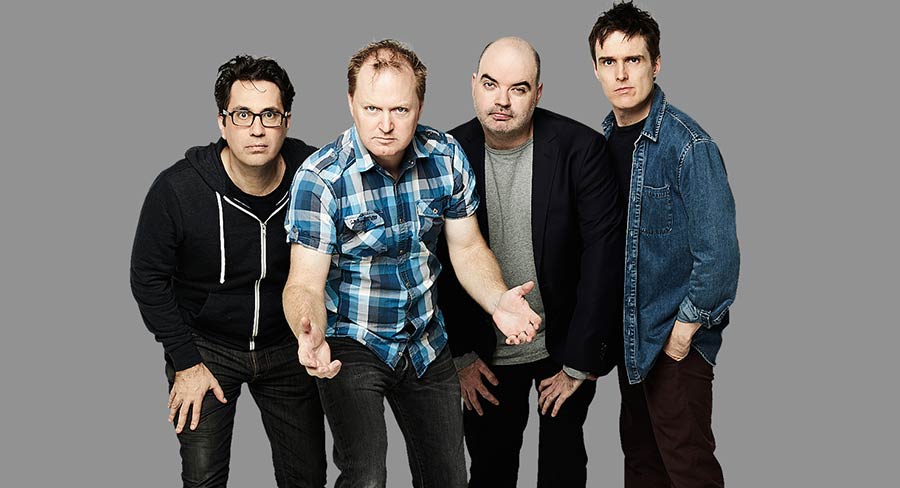 • Predictions about the future of Nine-Fairfax, mischievous plans for 2GB, Karl Stefanovic’s next job and New Idea forecasting

Currently hosting an afternoon show on Triple M Sydney, The Chaser is noted for being first to everything. This is why we are going early with their thoughts on the media world in 2019.

It’s like Mediaweek’s version of the Festival of Dangerous Ideas. Here is the unedited commentary from Chris Taylor, Charles Firth, Dom Knight and Andrew Hansen.

Dom: Charles getting Kerri-Ann to quit Studio 10. We read in New Idea that it was definitely happening and all down to him, so it must be true.

Charles: For me, it was definitely the first few hours of Alan Jones’s radio show when he hadn’t realised we’d projected his number onto the opera house.

Chris Taylor: The Sky News interview with Blair Cottrell. It was really refreshing to see Sky give a platform to someone much more moderate than its own presenters.

Andrew Hansen: On the 19th of June my Wi-Fi dropped out completely, and I was spared having to consume any Australian media at all. Best day of my life!

Best thing about being on Triple M?

Chris: Not having to be on 2Day FM.

Dom: The chance to put most of the group back together, on the station where we did The Chaser’s first ever paid media gig back in 2001. It’s been like a family reunion.

Andrew: Ease of access to advertisements about hardware products.

Charles: I’ve really enjoyed their new digital stations. Triple M Baroque has been my favourite new station. It’s got all the best hits from the 1600s, 1700s and new music from the 1800s.

Charles: No. The strain of working an hour a day is killing me. Never worked this hard in my life.

Dom: No, it’s terrible. We put the group back together without remembering how much we all despise one another.

Andrew: Yes, it’s the most athletic and physically demanding job I’ve ever had.

How are you adapting to commercial radio ?

Chris: I’ve come from triple j, where every second mic break is a plug for a music festival or an upcoming tour. So it was quite hard adapting to commercial radio, where there are infinitely fewer blatant ads.

Dom: We’d like to think we’re starting a trend, and expect to see Kyle and Jackie moving to 3pm-4pm weekdays next year.

Charles: We actually started on Triple M back in about 2000, so it’s nice to be back. They’ve added a Foo Fighters song to their playlist since then, so it’s really different.

Is there one thing you think your show lacks?

Dom: A Female ! Obviously, although we are working on that at present. One option we are considering is getting Kerri-Anne!

Chris: We’ve had a bit of interest from rival stations. Can’t say too much at this stage. Suffice to say I’m very impressed by the new mix of music they’re playing at Coles Radio – that Down Down song they play never gets tired.

Dom: More radio with Triple M, but what we’re really angling for is the big one – smoothfm. What would be more relaxing as listeners drift off into their daily coma than Radio Chaser making lots of jokes about Barnaby Joyce, lethal strawberries and the poo jogger?

Charles: We deny that we are merging The Chaser with Nine. But if we do, the new entity, called Nine, would be a “merger of equals”. Besides, the competition regulator would never allow it. Merging the two most satirical media companies in Australia would be simply too much concentration for one market.

Andrew: We’ve done about 19 years of comedy, so we’re hoping to shake things up by doing another year of comedy

Any TV coming up for The Chaser ?

Dom: Maybe an election show as we always like to do them, or maybe we will finally take on the genre that suits us best – Nordic noir. There’s a story we want to tell about a string of murders in IKEA model kitchens. Chilling stuff.

Charles: We’re planning a show that stars only sitting Presidents, Prime Ministers and global bankers. It’s going to be called The Chaser’s Outsiders.

Chris: And we’re in talks to make a sensitive travel series through China. Ross Cameron has signed on to host.

Any fallout from your Opera House stunt?

Charles: The Privacy Commissioner has been in touch. Not sure how they got my number. I’m assuming they’re interested in advertising on the opera house.

Chris: The state government’s still waiting to hear from Alan Jones about what the correct punishment should be. Most likely 300 hours of community service listening to Alan’s show.

Dom: Alan Jones hasn’t invited us on his program since the stunt – or before it. Also, Charles is still getting hundreds of calls and texts after his number was aired on Studio 10 and is wondering about forwarding his phone to Kerri-Anne’s.

Any plans for more of your trademark stunts ?

Chris: We’ve actually got plans to bring down 2GB altogether. It’s quite easy – we’re just going to install Michelle Guthrie and Justin Milne to run it.

Dom: Our stunt of installing Scott Morrison as PM is going really well. It’s a slow build, but we think you’ll agree, every new set of poll numbers is funnier. We are really proud of the bus he doesn’t travel on – that took a lot of brainstorming.

Andrew: As part of their commercial remit, Triple M are keen for us to do a stunt where we go into a hardware store and enthuse about the high quality and value of the tools available. I think it’s shaping up to be The Chaser’s biggest moment yet.

What good could come from the Nine-Fairfax merger?

Charles: If Karl Stevanovic is made editor-in-chief of The Sydney Morning Herald then at least he won’t have time to host Today any more.

Andrew: Yes, seeing more media exposure for Karl Stefanovic. It’d be great to see him back in the spotlight again.

Chris: Well, since the Daily Mail blatantly copies everything that Fairfax does, I’m looking forward to the Daily Mail’s announcement that they’re merging with Nine as well.

Next year is the 20th anniversary of Chaser. How have you stayed together that long ?

Chris: Our policy of “no office romances” has worked wonders.

Dom: The line is somewhere between our deep personal affection for one another and a lack of solo work.

Andrew: Through a fortunate lack of opportunities elsewhere.

See yourselves doing any live work as a group again sometime?

Dom: We like the idea of a 20th Anniversary Tour, but at this rate it’ll be our 30th anniversary before we organise it.

Charles: I hope so. What this country needs is more white, middle-aged male performers.

Advice to young people getting into radio ?

Charles: Back off. We were here first.

Dom: In our experience, the best way to get a gig in radio is to start an unsuccessful satirical newspaper, do TV for 18 years, all as a precursor to doing a one-hour daily radio show that’s only on in Sydney.

Andrew: Do what most radio bosses advise – sound different from everyone else, and also sound the same as everyone else.

Chris: It might seem really hard at first, but if you stick at radio for long enough, you too can one day enjoy the lofty heights of doing the 2SM breakfast shift like John Laws.