After Upfront events from Network 10 and Nine Entertainment offered more of the same in their 2020 schedules, the market seemed hungry to hear about new shows. Advertisers and agencies were also keen to see new Seven CEO James Warburton in full flight. The Seven Upfront delivered on both counts.

The Seven Upfront was loaded with programming announcements, a full reveal of the new shows and when they would be on, plus an address from Warburton that was bold and brave, with a frank admission about the past few months.

Seven’s Upfront seemed to borrow a little from Apple events. Slick production (which Andy Kay and his team have always delivered), a word from the CEO that summarises success and challenges, and then hands it over to people in the engine room to explain what is happening. 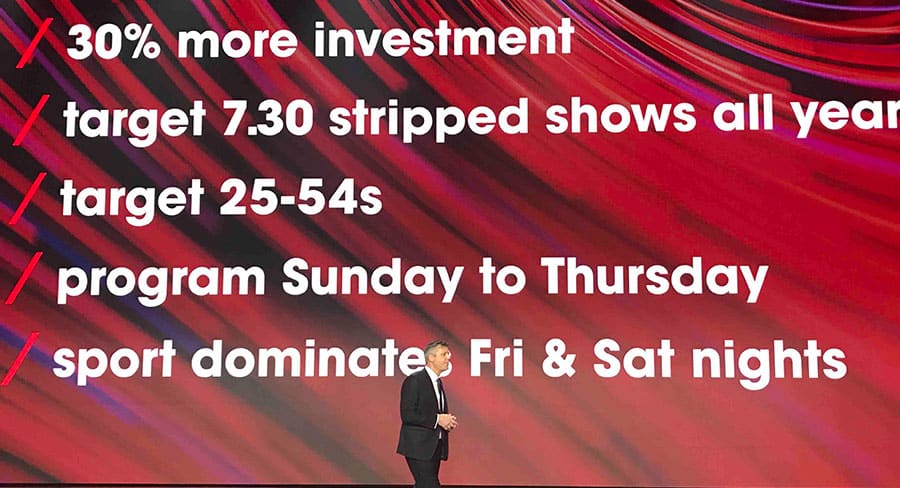 Warburton early on explained the recent asset sales and acquisition has been done with one objective and one focus: “To invest in content which will improve our performance and create a go-to media network for the largest and engaged audience in the country.

“Five days ago we changed the game. The proposed merger with Prime will make us the biggest broadcast premium video and news network in Australia.”

To reinforce the image of the graphic on the screen behind the TV chief, Warburton stressed: “That’s right, we reach 90% of Australians all in one place. Right here on Seven – one phone call to the Seven sales team.

“To clients and media buyers it is simple. We will halve your workload. We have the most superior and unmistakable offer in the market. The biggest platform to deliver true business results for your organisation.

“If you harness the combined Seven your reach is now 21% more than Nine and 47% more than 10. With our evolving digital strategy and our Western Australia newspaper assets our intention is to target more than just the broadcast market.

“As a merged entity we are larger than Facebook and YouTube on reported Nielsen DCRs. [We are] the number one offering – premium, brand safe and all in one place.

“It is bordering on ludicrous that we remain one of the few countries in the world where national audiences are split because of where you live – but no more. One place, one audience, one brand new, fresh go-to-market offering.” 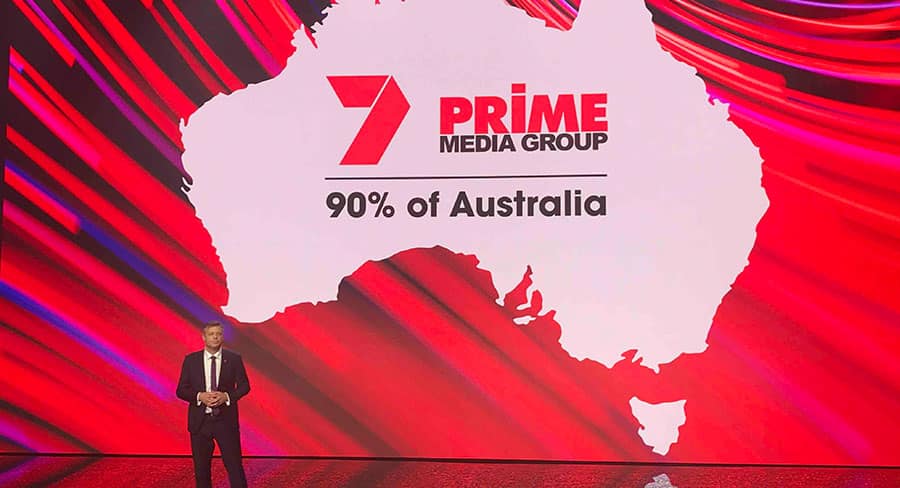 Warburton acknowledged Prime Media chairman John Hartigan and CEO Ian Audsley who were both at the Upfront.

The most revealing part of Warburton’s address to past, present and future commercial partners was his examination of the network’s recent performance.

“As a content company in recent times we have lost our way in our entertainment strategy and tentpole strategy. We haven’t invested in these tentpoles, we haven’t developed them and accordingly Sunday to Tuesday at 7.30pm has been a real problem.

“We have been weak, inward focused, tired and stagnant. Recently we have had a string of poor programs and failures by our own high standards. We have let others take a share of what we have been so good at in the past. We haven’t thrown a punch over the last quarter and, to be frank, it’s been disappointing.

“It is important to be totally transparent and to ensure everyone in this room knows what our plans are to address that.

“We probably won’t get it 100% right from here, but we can guarantee we are the best network to deliver for you.

“My job is to give the team the tools and the financial power they need to make the changes. Our competitors have had it easy. We have not been ourselves and we have not had a clear strategy or focus.

“From here on in we will be fierce. We will invest 30% more in content on our tentpole programs at 7.30pm. We will program Seven 52 weeks of the year. We will target people 25-54 and we will invest in programming Sunday to Thursday. Sports and Better Homes and Gardens will continue to dominate Friday and Saturday nights.” 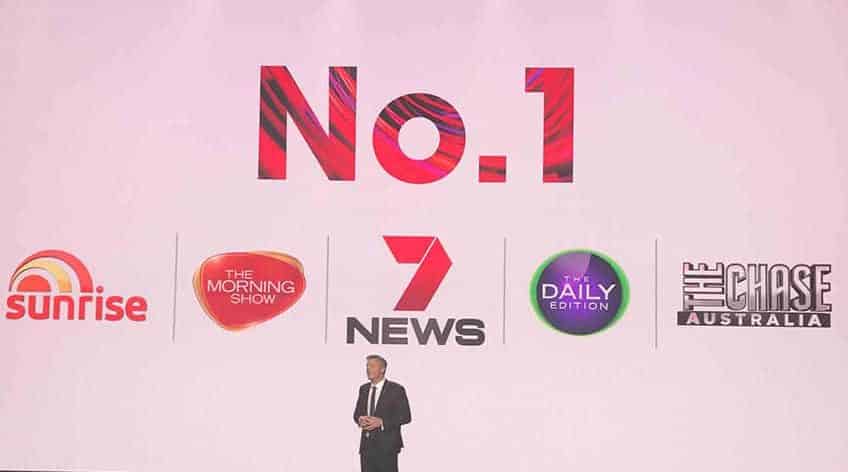 Warburton also remarked on the recent appointment of Charlotte Valente, Seven West Media’s first chief marketing officer. He said Valente would “completely freshen our go-to-market proposition with a renewed look and feel and an increased laser-like focus on the audiences we serve.

“We will refresh and reinvigorate our tentpole programming, but not throw out the formats that have been very successful for us.”

Warburton then reminded My Kitchen Rules and House Rules both delivered pretty handy audiences earlier this year. “But these shows haven’t evolved, and to be honest, they have looked tired.”

He also addressed Seven’s preoccupation with producing internally. “We have had our doors closed to the outside production world. But no longer. We have opened those doors and the best production companies have come straight in, and they are welcome. Tonight, in a first, you will hear from some of them.”

Warburton then reminded the audience how dominant the network was in 2018, before turning to 2019: “Currently we are less than a point behind winning another year. If you take out The Ashes, a one-off event, we are actually leading the year.”

Warburton then reviewed the current ratings performance: “From sunrise to sundown we dominate. From 5am until midnight we lead the year. Sunrise has won 294 days in a row and counting. The Chase is unbeaten and at 6pm Seven News has won 272 and 294 nights this year.”