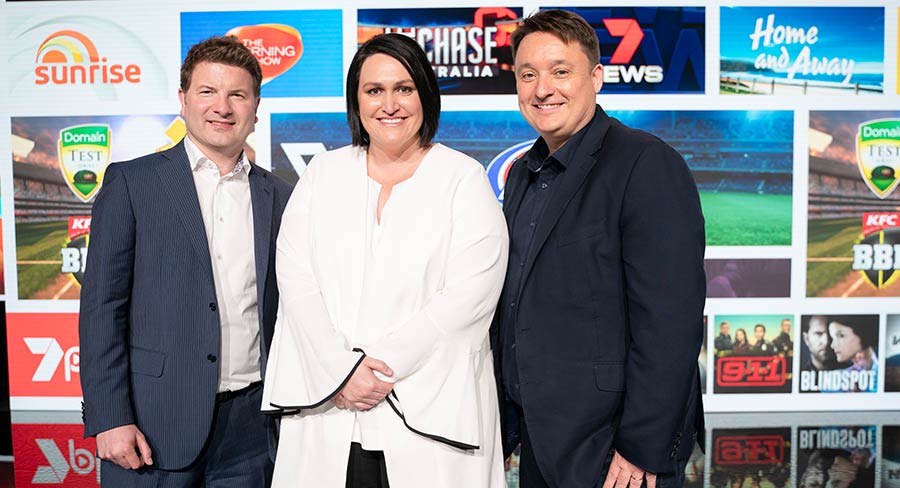 • ‘Even with the odd stumble, we’ve still ended up in a very, very solid position’

Although Seven, along with Nine and TEN, is focused on big reality formats at 7.30pm daily, Seven has a lot of drama in the schedule – both imported and domestic.

Seven and its competition have been busy to find another US drama with the attraction that the first season of The Good Doctor had.

The days of acquiring international content by output deals are gone, but networks are not averse to what are labelled “volume agreements”. Seven has those deals with Fox and ITV. Otherwise they buy programming on the open market. One of the Seven local dramas to attract attention at the Allfronts was the John Edwards-produced Australian Gangster. Dramas are now short-run series, with Australian Gangster a miniseries screening over just two nights. Seven will promote it during the cricket next year and it is expected to screen early in 2019.

Seven invested in a lot of new content for its 2018 back half of the year, with Ross admitting it didn’t all find the audience hoped for.

“We have certainly improved year-on-year and that’s what we said we’d do. We certainly lifted our performance, a very, very strong performance, going far deeper into the back half. There were a couple of shows that didn’t perform to expectations. We go back to the drawing board on those, but we are the only network that has lifted share in the back half of the year.”

Underpinning Seven’s performance is its early evening with The Chase, Seven News and then Home And Away. And don’t forget the dominant multichannels, said Ross.

“At the end of the year, we are still going to have the highest all people share ever for a network and we are going to win all key demographics and that excludes the Commonwealth Games.

“Even with the odd stumble, we’ve still ended up in a very, very solid position.”

Ross is in no doubt that coming late to market with another food channel will not hinder the success of 7Food Network.

“You are going to see us produce a number of shows specifically for that network. They’ll be produced by Seven Studios and we’ve also got a lot of content on the shelf that we just haven’t had the right environment to use.

“We’ve got a number of overseas series, like other My Kitchen Rules, that are excellent that, for various reasons, we haven’t felt we had the right environment to run.”

One of the benefits of launching another multichannel is that it adds to the overall channel share –something that Ten is missing with just two multis.

Seven didn’t want to reveal any ratings targets for 7Food, but Ross agreed that a target of 1%, which is what SBS Food has been doing, would be one of the first aims.

While Home And Away pulls some attractive demos at 7pm, the overall numbers continue to slip. Seven is always reviewing its schedule, but Ross told Mediaweek:

“Home And Away is not going anywhere. Let me give you the tip. The great thing about dramas is that they are always ripe for re-invention like reality shows. We’ll be making a number of tweaks [to Home And Away] for next year that I think can steady and, hopefully, grow our performance in that slot. The show is huge on BVOD, it’s big in consolidated seven and consolidated 28, as well. It is our most important show.”

With Seven going for relationships-in-trouble programming, the sort of driver that starts Nine’s year so well on MAFS, Ross doesn’t think Seven is lowering the bar.

“I don’t think we are lowering the bar, at all. I think you’re misinformed. Bride and Prejudice from right at the start of last year had a very, very big cross-generational appeal across female audiences. It didn’t alienate anyone and it was a very strong performer in the demos. It ticked all those boxes that made us go, ‘This show is ripe for moving into the 7.30 slot’ because of that broadness of appeal and that’s why we’ve decided to go with that at the end of this year. Switch probably skews a little bit younger.”

Seven held Bride and Prejudice until the back half, waiting for a slot. “You obviously don’t want a genre match. When you hit that back part of the year, we know what TEN is doing – Survivor and Bachelor – and Nine is running The Block for most of the rest of the year.”

While Seven has much of its year at 7.30pm sorted with My Kitchen Rules to start and finish the year, with House Rules and more Bride and Prejudice too, Ross said he is in negotiation to buy two new formats which both could find a home at 7.30pm midyear or slightly later.