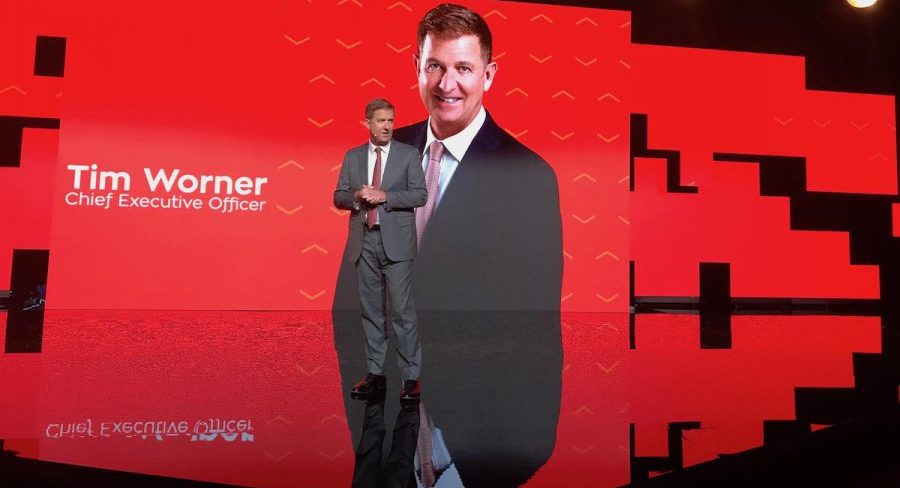 “And in not so breaking news – Seven has the highest commercial share in broadcast history.”

Start time: 9.40am
End time: 11.17am
(Second session in Sydney Friday afternoon then show moves to Melbourne on Tuesday.)

9.40am Starts with Mark Fergusson from Seven News Sydney with a promo for Seven Allfront – Seven News is promising show stoppers!
“Live from Seven’s new home at Media City. We are all in the one place for the first time”. Except for Sydney News and Sunrise at Martin Place.
Fergusson adds: “And in not so breaking news – Seven has the highest commercial share in broadcast history.”

Cross to Chris Reason who says: “We are waiting for Kurt Burnette,” to appear.
7Plus overtakes to be #1 video on demand.
Angie Asimus reports on success of 7Plus.
Jim Wilson reports from SCG on a bumper year for 7 Sport.
Fergusson signs off before the show proper starts: “Thanks for your company and enjoy the show.” Clip of Omnicom Group CEO Peter Horgan talking to Alf from Home And Away about waiting for Tim’s ferry to take him to the show.
Clips other media agency CEOs making their way to the Seven Allfronts including Victor Corones (Magna Global), Danny Bass (IPG Mediabrands), Mike Wilson (Havas), Toby Barbour (Starcom) and Matt James (Publicis).

9:47am Allfronts MC Julia Zemiro in audience
As she walks to the stage she encourages the audience: “Keep the clapping going”.
Zemiro explains why event is Allfronts, not Upfront: “All platform presentation, not just a TV presentation.”
Zemiro claims Seven is the biggest producer of content in Australia.

9:50 Kurt Burnette back on stage
Promoted the new Seven HQ where everybody will be at Media City: “We are all in one place for the very first time. We are a modern media company and we start and end with content.”
Clip of Better Homes & Gardens and House Rules host Jo Griggs talking data and integration.
Kurt Burnette is back: “Content, data and tech to help make life easier and grow brands.”

Seven is not only #1 TV, but and #1 BVOD after a big push.
“Seven the only place to buy ads between the overs and the goals. Biggest marketing platform in Australia.”

Cricket sponsorship program fully subscribed. Burnette says it was an easy sell. “The fastest take up I’ve seen after 28 years in TV.”
Seven always makes bigstatements about the future. This time we are two years into the future. Tokyo in 2020 – Burnette says this will be the most-watched Olympic Games ever – bigger than Sydney 2000.

10:02 Seven News, current affairs, drama and lifestyle stars on stage
From Jo Griggs to Kochie and Sam, Michael Usher, the rest of the Sunrise team.

10:05 Mel McLaughlin on stage
7News and 7Sport anchor runs through all sports highlights – the biggest summer and the biggest winter sports.
Details from Santos Tour which has moved from Nine to Seven, plus 68 days and 102 matches of cricket. McLaughlin joined on stage by Michael Slater and Abbey Gelmi to talk cricket.

Slater notes he is the only commentator to move from another channel.
“I am so blessed Seven has taken me on. I retired without enough money, sooner than I wanted to because I didn’t get enough runs. My fault…I should have got more runs.”
Longish cricket segment goes on for a while. But as Burnette later explained to Mediaweek, there are still advertising opportunities for the cricket.

10:15am AFL – AFL chief executive Gillon McLachlan on video
McLachlan runs through Seven’s AFL highlights – from ratings figures to the success of Grand Final and The Front Bar.
He even plugs the cricket – “Seven is the only place you can advertise in-game during the cricket.”

10:20am Julia Zemiro back onstage. Introduces content team – Angus Ross, Julie McGauran and Brook Hall.
Programmers Ross and Hall and head of drama McGauran talk about new programs.
Discussing The Super Switch – coming to 7.30pm slot. Showed a clip of a tumultuous relationship and then reveals they will switch partners. Possibly a relief to both of them.

The Proposal – The Bachelor on steroids. Aussie version of a US hit. An Australian love story in one hour. Two people who had never met will leave the show engaged and ready to be married. It’s never been attempted on Aussie TV.

Australian Gangster clip. We are not supposed to be showing for legal reasons.
Very long compile with many scenes. Looks pretty good. From producer John Edwards and the pro co Rough Diamond.

Hall talks about 7Plus and how big broadcast hits drive demand for BVOD.
McGauran reveals “2019 will be a huge year for drama on Seven.”
Bevan Lee is back. Clip of Lee explaining what he explores in his new drama Between Two Worlds. “The space between two very different realities.”

A new show is promoted as a cross between Fatal Attraction and Bridesmaids: Secret Bridesmaid Business deals with infidelity and will be screened in back half of 2019.
Ms Fisher’s Modern Murder Mysteries set in 1960s Melbourne.
Will launch in Q1 2019. Extensive clips shows, very cool 60s feel with accompanying graphics.

Brooke Hall: Arguably our most important show – Home And Away.
One of the biggest BVOD shows too. AS to it continuing to occupy the 7pm slot? Ross tells Mediaweek it aint going anywhere.
One Night Only: Ladies’ Night. Angus Ross: “My prediction is this will be bigger than The Real Fully Monty.”
Julia Zemiro to Ross (or any other executive who is listening): “I hope they don’t ask me.”

House Rules: Hall calls it “Our quiet achiever. Anchors our second quarter with a few big changes this year.” Clip of Jamie Durie graphics being prepared for his return to Seven.

Q3 tease about two big formats Angus Ross can’t announce yet. Not sure if he has bought them or still in negotiation.

My Kitchen Rules 10th season preview. Clip and then Manu Feildel and Zemiro speaking French at a dining table onstage. They are then joined on stage by Colin Fassnidge and Pete Evans. Another clip to introduce some of contestants from 10th season.
“Dinner party terrorists” one team is called. Seems apt from the clips we see.
Evans: Something very unique for season 10 we can’t reveal at this stage.
One surprise is the show will pair perfects strangers – they have never met or cooked together. Can they win My Kitchen Rules? Clive Dickens talks trust and privacy and then shows map pinpointing Seven viewers. Can almost tell which room of the house they are in!
Launch of 7News.com.au – Multi-million dollar launch with hundreds of journalists across the world.

7plus to be totally reimagined for Tokyo Olympics.
First ever 8K live site – you won’t have to travel to Tokyo, it will be in Australia.

11.12am Tim Worner
With the Allfronts event running way over time, Worner’s speaking time is getting shorter by the minute.
Record-breaking performance this year.
Next year we want to do better for you.
Ambition to double the Seven audience. Worner reveals there will be a second instalment of My Kitchen Rules in 2019 – a 10th anniversary series.