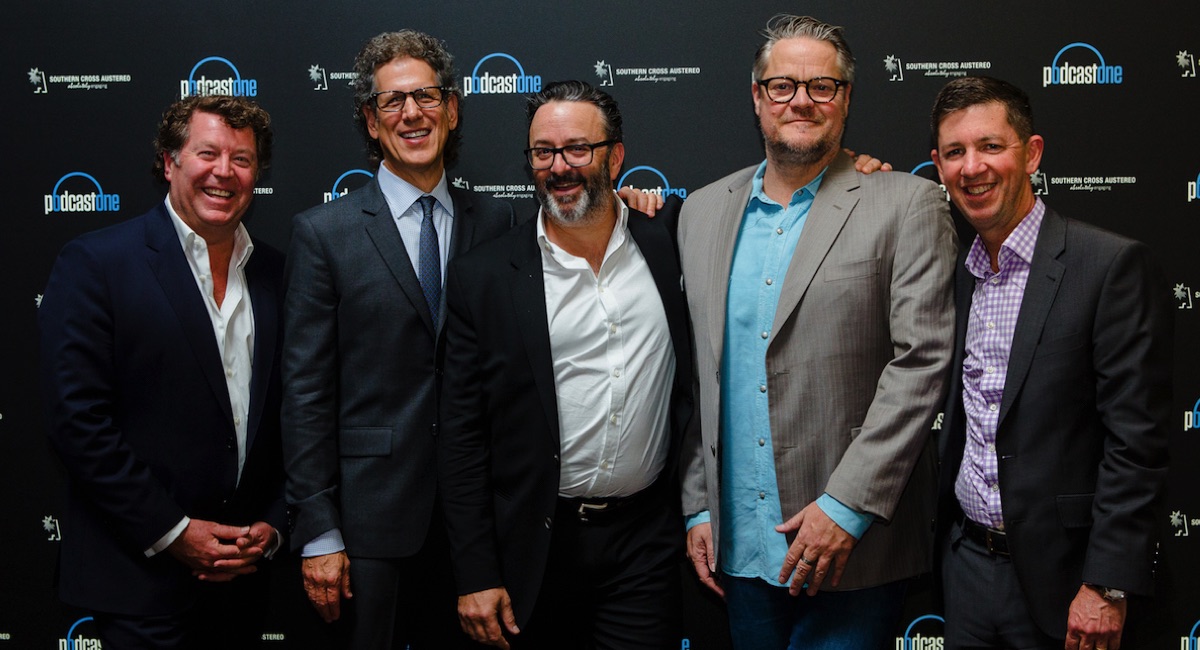 PodcastOne quietly launched earlier this year and has been building an audience for its original content as well as selected US podcasts it also offers. Among its Australian content partners is Mediaweek with our Mediaweek and Seven Days podcasts.

Last night the Australian broadcaster officially launched the Australian operation in Sydney with an elaborate launch event complete with a 20-minute walk-through audio experience. A Melbourne launch will follow next week.

Held at Sydney event space Commune, upon arrival PodcastOne launch guests lined up on a black carpet before being ushered into the building in groups of about 20. Each group was then fitted with head sets and taken through three different podcasting spaces. The audio guide for the tour was PodcastOne contributor Dr Nikki Goldstein.

Room one was set up as a crime scene from Melbourne’s Hotel Saville which features in Adam Shand‘s new Trial Of The Vampire podcast.

The second stop on the audio tour was a sports locker room with podcaster Mark Howard recording a Howie Games podcast with former AFL player and coach Paul Roos. Roos has also released a new book and it was later revealed he will feature in his own podcast on the platform shortly. Roos talked to Howard about buying his first house for just $150,000 in suburban Melbourne and the fashions for footballers in the 80s, including the skinhead cardigan.

The final stop was a dining area of a restaurant with the guests sitting along both sides of a long table. Here they heard an except from Gary Mehigan‘s new podcast A Plate To Call Home as they were served an entree.

After all the guests had completed their audio tours, Grant Blackley took the stage to welcome the visitors. “One thing I know about podcasting is people don’t like it… they love it,” he said.
Blackley said when SCA decided to get into podcasting they realised they had the ability and the infrastructure, but they really wanted to understand more about personalisation of audio.

“We scoured the world to find the best single partner we possibly could who would have the tech, the platform, the brand, the analytics and the content. We found them in PodcastOne.”

Grant Tothill followed Blackley and introduced Adam Shand to the stage. Shand then conducted a podcaster panel with other PodcastOne contributors Rosie Waterland, Mark Bouris, Gary Mehigan, Nikki Goldstein and Mark Howard. All the men admitted to being listeners to Goldstein’s Sex and Life podcast.

Guests at the event included a number of media agency buyers, SCA executives from around Australia and many PodcastOne contributors, including Adam Spencer who will soon launch his podcast The Big Question.