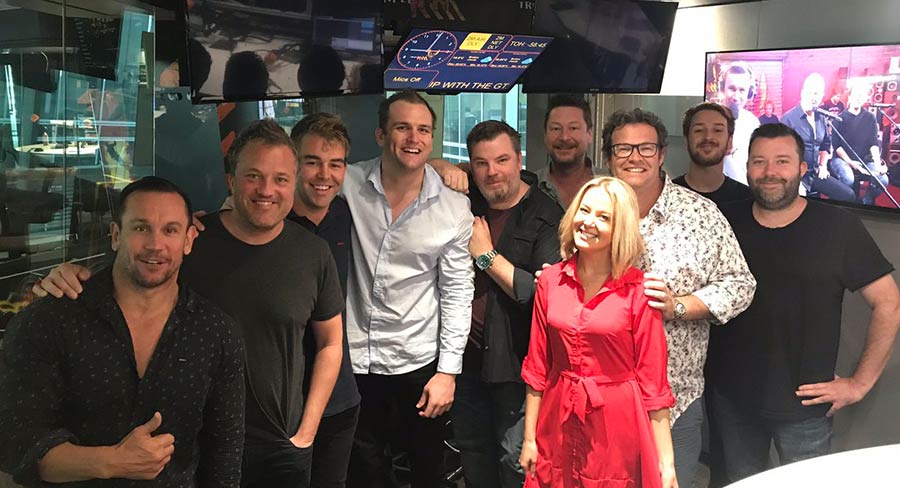 Before the 6am breakfast shows started, Those Two Girls were on-air at the Hit Network from 5am. Their special guest today was Grant Denyer  who was promoting his Christmas single Driving Home For Christmas. The girls – Lise Carlaw and Sarah Wills – will be taking over from Denyer and other Hit Network breakfast shows for the next two weeks.

Later in the morning, Denyer revealed he will be back next year with both Ed and Ash (see separate announcement.)

At 2GB Alan Jones checked out for the year after recently recovering from a return of his health problems that have dogged him for some time.

Jones pleaded to his listeners for not so much correspondence during the break so he didn’t have to reply to everybody. Christmas cards OK perhaps?

3AW held its Christmas party last night, revealed Ross and John early this morning. “A good time was had by all,” said Ross Stevenson without giving away too many details. The highest-rating metro breakfast show in Australia still has one more week on-air.

Some of our long-term staff have decided to dessert us, started Kyle Sandilands this morning. He discussed the departure of EP Bruno Bouchet and how “Palestine” (new EP Sonia Jahshan) has been given the “filthy [executive producer’s] hat”.

“You are no boss of me,” Kyle reminded her after a newspaper article might have suggested otherwise. “I know that,” Jahshan told him.

Bruno then explained how a media item about his departure [not Mediaweek’s!] wasn’t exactly 100% correct.

The show’s censor Vanda is also departing. Kyle said she had only ever spoken on her first day. And she had a brief word this morning. “She sounds like a sex worker,” laughed Jackie. “There will be guys jerking off after hearing Vanda,” suggested Kyle.

It was a rare moment of reflection from the #1 FM Sydney breakfast show as the hosts talked with the large team.

On Matty John’s final day on radio at Triple M Sydney he got to choose all the music. Screaming Jets, almost the Triple M network’s house band, started the final day party with C’mon. Johns flies out of the country for a holiday today heading to the UK.

The celebration of his radio career has been under way for some time, with special calls from some of his Triple M characters across the final week.

Callers today to The Grill Team had their chance to farewell Johns across the show, some with very good stories.

Amongst the farewell calls was a message from Kyle and Jackie O. “The only other show we have actually liked,” said the KIIS Sydney breakfast hosts. “We shared many cigarette breaks when we worked at the same studios.”

Triple M Sydney boss Jamie Angel was on-air after 7am for his tribute via an aircheck of Jamie on Angel FM.

“I’ve never heard so much shit in my life,” said the real Ray Hadley on a call. “If they loved you so much why didn’t they listen?”

A tearful Gus Worland paid a very moving tribute to his departing colleague late in the show. There was a moment of dead air when he finished as people composed themselves. It was a moment when you wished you were watching television to fully comprehend the emotion between the team.

The real Jamie Angel came on air at the end. “I’m not drunk and I don’t do drugs,” he explained.

It was also the last show for EP Max Dudley who is moving to Triple M Brisbane.

Matty’s outgoing tune: Tom Jones and Green Green Grass Of Home as he flies out to Ireland.

Meanwhile at Triple M Melbourne, in true showbiz tradition, Eddie McGuire was teasing a big announcement about the show for 2019 (a confusing announcement that The Footy Show was continuing, sort of). The first hour of the Hot Breakfast didn’t vary much from what it has delivered all year – plenty of AFL news including updates of what is happening at Collingwood.

Wil Anderson steered the show towards cricket after 7am when he joined Ed and Luke Darcy.

Like Matty Johns, McGuire was also leaving the country today.

“We are taking an undeserved break,” said Ed Kavalee on 2Day FM breakfast where he co-hosts with Grant Denyer and Ash London.

The show let Denyer loose on a phone topic he has wanted to do for a long time: “What have you done on your meds?” Every caller got $250 cash from Kmart.

Later on the program Spice Girls tickets were given away plus a trip to the UK too.

Jonesy and Amanda gave away a new car on the final Jonesy & Amanda show for 2018. The program, executive produced by award winning producer Laura Bouchet, gave the prize for the best Goolie of the year in the segment What Gets My Goolies.

Nova Entertainment breakfast shows wrapped up all around Australia.

After their last show this year, Nova 100 Chrissie, Sam & Browny are joining key partners and clients by hosting Chrissie, Ham and Brownies – a special morning tea for guests at Nova 100’s Richmond studios. In Adelaide, Nova 919’s Dylan & Hayley breakfast show have been celebrating Christmas for a while.

Nova Brisbane’s breakfast team, Ash, Kip & Luttsy with Susie O’Neill, broadcast from the top of the Story Bridge for their last show of the year.

The Nova team convinced others to join them on what’s been dubbed “The Climb” including Queensland band Busby Marou who went to the top with two guitars to perform. This was the first time a band has performed live on the top of the Story Bridge.

Twelve listeners also won a chance to join the breakfast team with one a lucky winner of a Fiji family holiday for four worth $4500 thanks to Flight Centre. In Sydney, Fitzy and Wippa are off on summer break after their most successful year together. Taking their place for two weeks is Australian Bachelor Matty J.

He will join Nova’s Matt De Groot and Sarah McGilvray, as a host on Nova’s summer breakfast Matt, Sarah and Matty J, from Monday 10 December at 6am.

Matty J said, “For me, Fitzy & Wippa stand at the pinnacle of the radio industry so to be asked to fill in for them over summer is such a huge honour. I couldn’t be happier to work with a station I’ve grown up listening to and alongside two absolute legends, Matt and Sarah. This is such a ‘pinch myself’ moment – if you told me 12 months ago I’d be doing this, I’d have said you were crazy!”