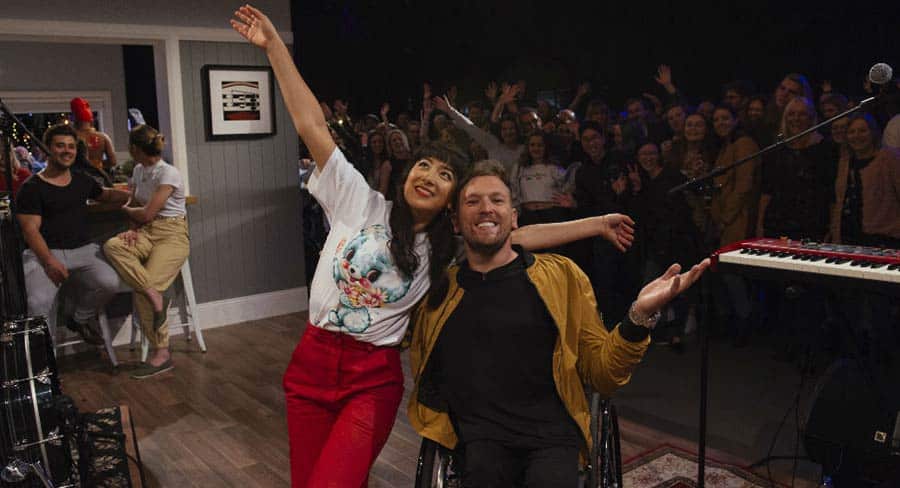 This is a good time to be on 10 with their cute re-branding and decision to stay in the game for 50 weeks a year.

It’s been a long time since the ABC did a live music show but this week it launched The Set and it got off to a great start.

It was wacky, had a cool mix of performers, and having them all hang around so they could perform together in a group finale was inspired.

As a gender-diverse performer floated around the “share house” making snacks, it reminded me of Claire De Lune doing the same thing on Room 208, a show that was created in-house by the staff of Channel [V] during a rather wild conference. The Set could have been created in a similar environment because it’s got a fun vibe to it, and co-host Dylan Alcott is one of the TV finds of the year. Hopefully he will start appearing in as many TV shows as Grant Denyer does and, if he’s single, he could do The Bachelor too.

Grant Denyer is the new Eddie “Everywhere” McGuire and although Game of Games is sunk and sinking in the ratings, there’s always Dancing With The Stars next year. He is also in the opening scene of How To Stay Married, which stars Gold Logie winner Lisa McCune and, as quoted on the promos, “Gold Logie hopeful” Peter Helliar. Very funny, as is 10’s insistence that re-naming its channels Boss and Peach doesn’t mean they are skewing them as male and female.

This is a good time to be on 10 with their cute re-branding and decision to stay in the game for 50 weeks a year. That’s why the new shows just keep on coming, even though How To Stay Married comes from the ABC. It started off as an episode of It’s a Date, an anthology sitcom also created by Peter Helliar, and now it’s set 13 years later. It should have broad appeal but may also be why All About Dave, a somewhat similar family sitcom from Dave O’Neil, has missed getting picked up from 10’s Pilot Week. How To Stay Married was listed in TV Week to air Thursdays at 8:30pm, the same time as Orange Is The New Brown on Seven. That would have been an unfortunate result for two new Aussie comedies but, according to 10’s latest promo, How To Stay Married has been moved to 9pm. Now that is a smart move and allows both shows some space. Let’s also hope that hour on Thursday nights, once the home to The D Generation and Fast Forward, can now get a new generation laughing.