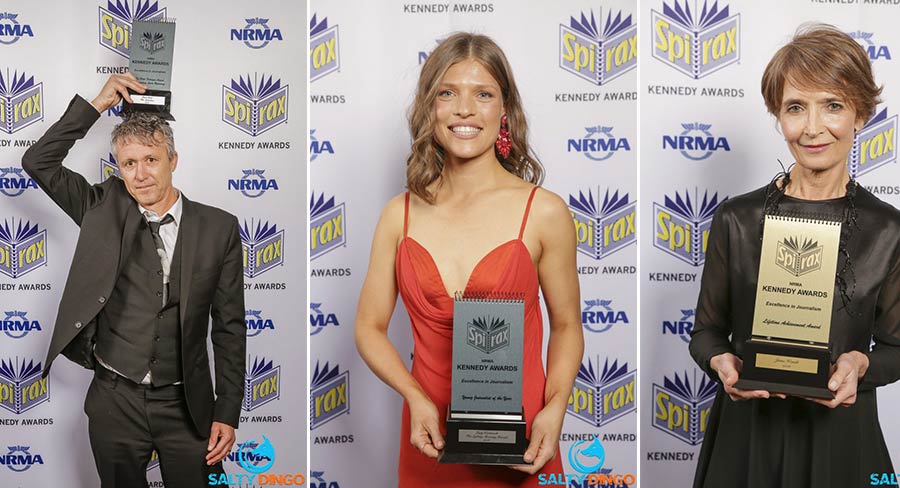 • News Corp Australia and Fairfax dominate with 23 of 34 trophies

The print and online publishing model might be under attack, but Australia’s biggest two news publishers continue to set the news agenda.

News Corp Australia was the biggest winner at the Kennedy Awards on Friday night with 14 of the 34 awards.

Fairfax Media was not far behind with nine awards.

The biggest single winner on the night – with the three major awards – was The Daily Telegraph’s national political editor Sharri Markson. Her scoops on Barnaby Joyce and his affair with a staffer saw her win for Scoop Of The Year, Outstanding Political Reporting and Journalist Of The Year. Highlights of the evening included the appearance of the wife and sons of the late Paul Lockyer, who were so moved by the moment they found it hard to announce the winner of the award in his name, which ABC reporter Anna Henderson won.

During a long awards show, short speeches were much appreciated by the audience. Newcastle Herald photographer Jonathan Carroll did best as he collected his award with one word – “Fuck”.

Seven reporter and producer David Richardson gave perhaps the most memorable speech as he pleaded for the recall of Today Tonight as a national brand. “TT isn’t dead,” he said after collecting his award for Outstanding Team Player. “If we are going to fight a war, let’s put an army in the battlefield,” he added, alluding to Nine’s domination of the commercial TV nightly current affairs offering.

Jana Wendt had a standing ovation when she was onstage for her Lifetime Achievement Award.

The Australian’s Peter Lalor spoke as well as he writes after collecting the sports reporting award and The Australian’s James Jeffrey noted it was his birthday as he collected his Outstanding Columnist award and led the crowd for three cheers.