While media reports are swirling about the future direction of Twitter as the company makes changes to its social media network introducing opt-in non-linear timelines and longer-form tweets, it remains an integral tool for broadcasters to communicate with its audience. Australian TV networks, in particular, have been very active with the start of the new TV year in engaging their viewers via Twitter.

Tony Broderick is Twitter Australia’s head of partnerships for news and television and is actively engaged with networks to ensure they are able to fully capitalise on the opportunities that the platform offers. Speaking broadly on local efforts, Broderick told Mediaweek: “What’s really exciting is that the four biggest of the five networks are all doing really great work around Twitter and integrating across. Every network is coming up with different creative angles on how to use Twitter. Some of those mechanics are before the episode goes to air, some of them are during, some of them are afterwards.”

As the 2016 TV year has kicked off, we have already seen some interesting uses of Twitter, such as the recent implementation by Nine of tweets as song cues throughout the broadcast of the recent Grease: Live. Behind-the-scenes commentary was also provided through the
@MollyTV account during the broadcast of the first episode of Seven’s Molly miniseries. 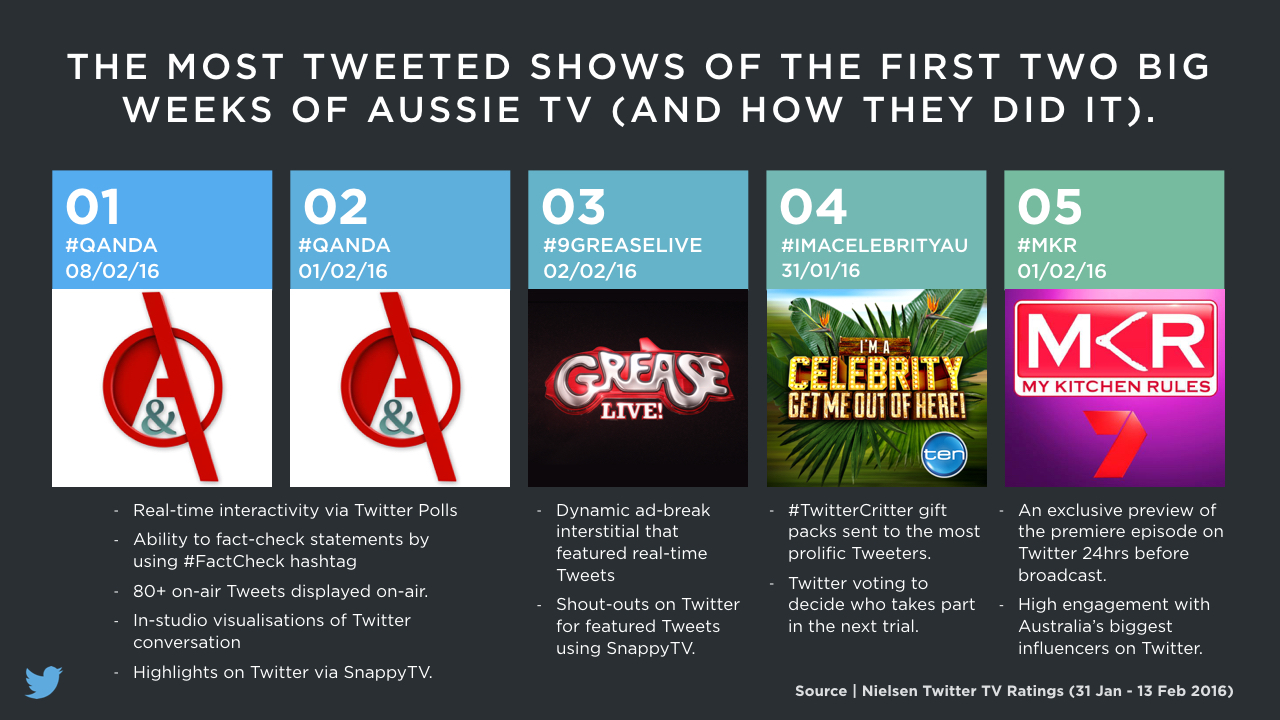 Unquestionably, the best Twitter integration continues to be the ABC’s Q&A, which every Monday night dominates Twitter. “They were the first by far in terms of integrating on-air tweets. It is very much how they like to reflect the national conversation back into the show and they are often the first in market to make changes and try new things, which is really exciting,” Broderick said.

This year the Q&A social team, spearheaded by consultant Leslie Nassar, launched a Twitter Poll, asking viewers whether the date of Australia Day should be moved. The poll ran for five minutes as the topic was discussed on the show, with the result read aloud on the live show by host Tony Jones. 560 people voted within the five-minute period of the poll.

“It was a very short timeframe. We know that when polls run larger, they can hit huge numbers. Kim Kardashian this week tweeted a poll asking what the name of Kanye’s album should be. That ran for 24 hours. It had approximately 300,000 votes, more votes than happened on the Iowa Caucus that day. More people voted on that Twitter poll than in the Presidential selection process, so we definitely can reach huge numbers in scale. Obviously it depends on the reach you’re tapping into and the timeframe,” explained Broderick.

“Twitter is a platform that has Australia’s biggest influencers on it. So while you may be retweeted by only a small number of them, who you’re being retweeted to is a much bigger audience because of the natural followings that they bring to the platform. I think that’s a really good example of where you might see tweet volume being a relatively modest tweet volume, but a huge impression reach. On My Kitchen Rules you might see 10,000 tweets, but over a million impressions based on the nature of who is tweeting about those shows. That is something you’d only get on a platform like Twitter,” he explained.