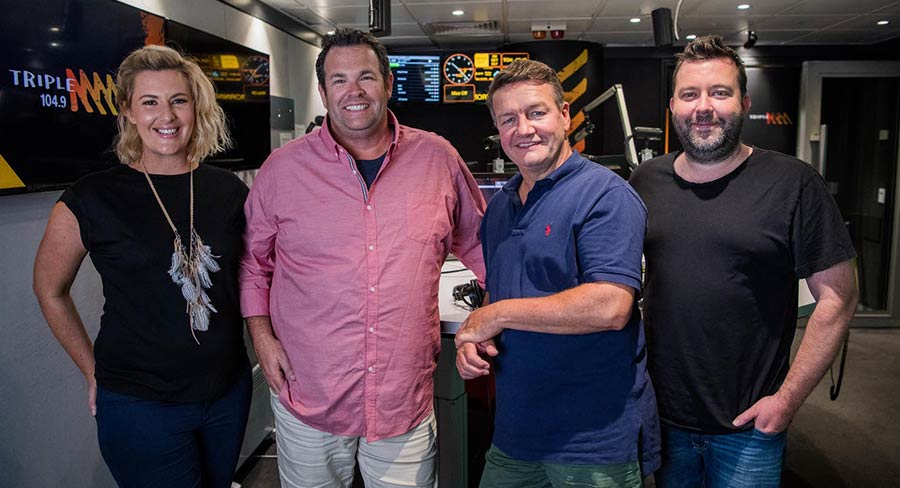 “Our goal now is to grow our 10+ audience in breakfast”

Triple M head of content Mike Fitzpatrick talks to Mediaweek about the move and how the network is positioned for 2019.

“She has runs on the board and you cannot find anyone in the industry that doesn’t speak highly about her. I already knew we made the right decision, but it was nice to have affirmation from many people after the announcement was made.

“I’m sure she will be sorely missed by Jonesy and Amanda. We will make sure we look after her and she will be great for Moonman [Lawrence Mooney].”

Asked if he was lucky that Triple M could secure her services without a long no-compete period, Fitzpatrick replied: “There is no such thing as luck!”

Fitzpatrick said he hadn’t been talking to Bouchet over a long period of time. “We always intended to start the year at Triple M breakfast with Sydney content director Jamie Angel producing breakfast. It is great to have the content director getting his hands dirty working on a show. We have also got some great producers from SCA working with me and Jamie getting that show right prior to Laura starting with us.”

When asked if Bouchet’s arrival means a change of target audience at Triple M Sydney, Fitzpatrick said: “It was obvious from the show we had before we were very, very male and also nearly exclusively western suburbs targeted. That was great because it was what we needed at the time.

“The Grill Team Triple M created nine years ago was what we needed. We had been in the wilderness and we had a share of about 2.9% in breakfast. We didn’t really stand for anything, we weren’t playing rock music and we had just bought the NRL rights.

“Creating The Grill Team was a necessary move to claim back our core audience, put a flag in the sand and say this is what we stand for.

“That show is not what we need now. Our NRL coverage is 10 years old and remains #1 under 70. The audience also knows what we stand for musically.

“Our goal now is to grow our 10+ audience in breakfast. Breakfast is where all the audience comes in and we then keep them across the day. We weren’t ever going to grow 10+ with the show we had there before.

“We are still a male targeted radio station with weekend sport and rock music. But in breakfast it should be able to be enjoyed by everyone over the age of 10.”

Fitzpatrick reminded us both Jonesy and Amanda are both ex-Triple M and very talented. “I love them both. Why wouldn’t the opposition try and take one of the reasons for that success?”

He added the role of executive producer is critical to the success of the show. “They work hand-in-hand with the talent, so you need and EP that understands and had a great relationship with the talent.”

The Moonman breakfast team were very happy with the new appointment, said Fitzpatrick.

He added that Mooney is cutting back big time on many of his commitments to focus on his Sydney radio challenge. “He’s not doing the Melbourne Comedy Festival or the Brisbane Comedy Festival. He is doing 11 shows at the Sydney Opera House which turns out to be fortuitous for the host of the Sydney Triple M breakfast show.”

Without the question being asked about where Mooney will be based (it was coming), Fitzpatrick said: “Despite what some of the press would have you believe, Lawrence isn’t doing the show from Melbourne every day. He will be in Sydney for the first couple of surveys and he is looking for apartments. He needs to be in Melbourne for some commitments and he will split his time between the two.

Of the arrival of Jess Eva in Sydney to be part of Triple M breakfast, Fitzpatrick said: “She will be a fantastic long term radio player. She has not come from a reality TV background. She comes from a radio background.

“She was with SCA in regional Queensland and more recently was on the Sunshine Coast where she did breakfast for the past six years. She is a radio person first.”

Has she moved to Sydney?

“Of course! She has moved her whole family to Sydney. Including her husband Norm who is a bit like Mick Dundee at the moment – he can’t believe how many big buildings there are.”

Triple M around the network: Brisbane

The Brisbane station had a great end to 2018 with a record share.

“Moony likes to downplay his role in that. The reality is that the Triple M breakfast show has great bones with Robin Baily and Greg Martin. Newcomer Nick Cody is great. He lives in Brissie and his strike rate is very high. He will be a long-term prospect too for Brisbane. We ended last year with a record result. It was heartening we did it via a slow, steady build over 12 months, which indicates we got the strategy right.

I don’t expect to have a 14.1% in surveys one and two this year, because you can’t change your breakfast show and stay #1. I certainly expect it to be competitive though.”

“I was very happy with the growth at Triple M Melbourne. They have had one of their best books in a long time. We have really managed to reinvent that show with Wil Anderson coming in. After eight years it needed a freshen up.”

Fitzpatrick admitted there were a few soft surveys last year. “But we didn’t just replace Mick Molloy with Wil. It changes everything when you change a person. We also realised the show we need now is not what we needed when we built the show nine years ago. Eddie understands that too and sees the need to keep the core promise that we will keep the audience in touch with everything happening in Melbourne. He also sees the need to broaden the audience and not just focus on football.”

“We had consistent figures across the year and we were consistently winning the workday, but unfortunately we ended dropping a little in the last two surveys.

“Kennedy Molloy has been hugely successful in Brisbane and Perth. It is growing in Sydney with some good recent results.

“In Melbourne, it is taking a little longer than I would have thought although we ended the year above 7%. It is a very tough market in drive. There is still room for growth and we are only a year in. No show works in a year anywhere…no matter who you are.”