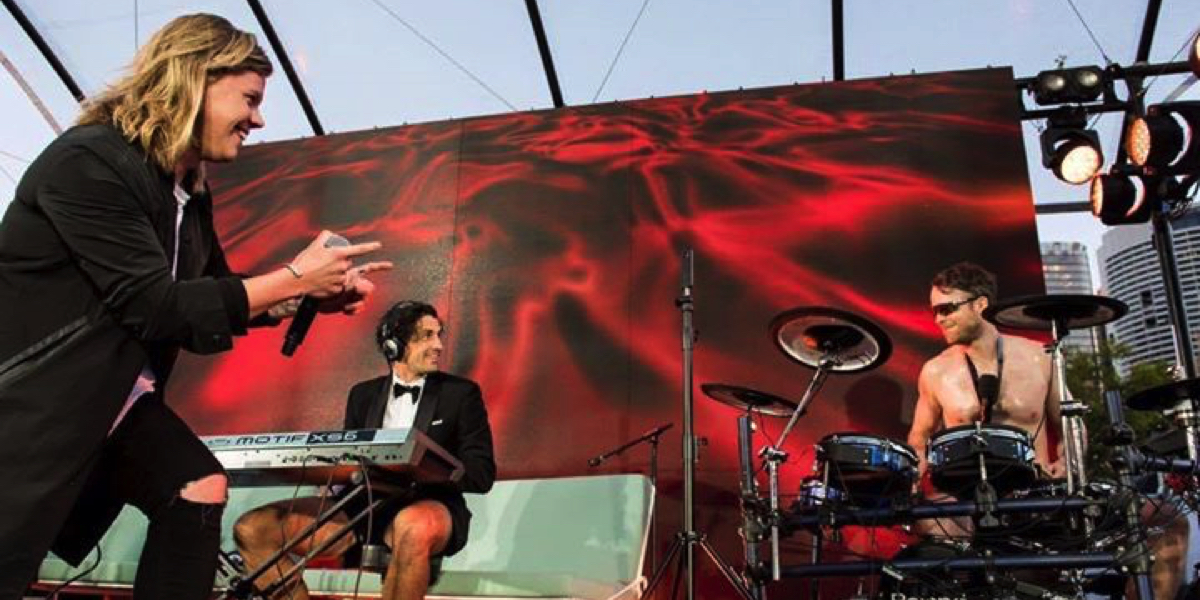 Hamish and Andy host their ninth annual Logies Spit Roast at the Cruise Bar in the Darling Harbour, Sydney

Partying for the Logies party kicked off on Friday afternoon with Hamish and Andy’s 9th annual Logies Spit Roast outside broadcast.

The Hit Network drive presenters hosted their show live from the Cruise Bar in Sydney’s Darling Harbour. Southern Cross Austereo booked out the entire venue for the event. A medium-sized stage was set up facing the bar on the ground floor, where the guests were downing alcoholic beverages and nibblers. It was a star-studded event with big names from TV and radio in attendance. Celebrities present included Rove McManus, Sam Frost with boyfriend Sasha Mielczarek, The Block’s Scotty Cam, NRL Footy Show’s Erin Molan, The Voice’s Delta Goodrem and Madden brothers (who were performing), singer Conrad Sewell (performed), Osher Günsberg, Today’s Karl Stefonovic and Lisa Wilkinson, and Home and Away actor Steve Peacocke. Hit network content director Gemma Fordham and 2DayFM content director Matt Anderson were also in attendance.

A highlight from the broadcast was Hamish and Andy enrolling themselves as part Conrad Sewell’s band. Hamish Blake provided the percussion by playing the drums as he was smeared in fat from the roast. Meanwhile, Andy Lee showed off his talents on a mini keyboard and saxophone.

“They have been practising in the office for days for this,” Fordham said as the comedic duo took to the stage.

Hamish announced that the deal was that Sewell could walk off stage if he didn’t think that he and Andy weren’t good enough. They performed INXS’ “Never Tear Us Apart.”

The roast started at 4pm and finished at 7pm.