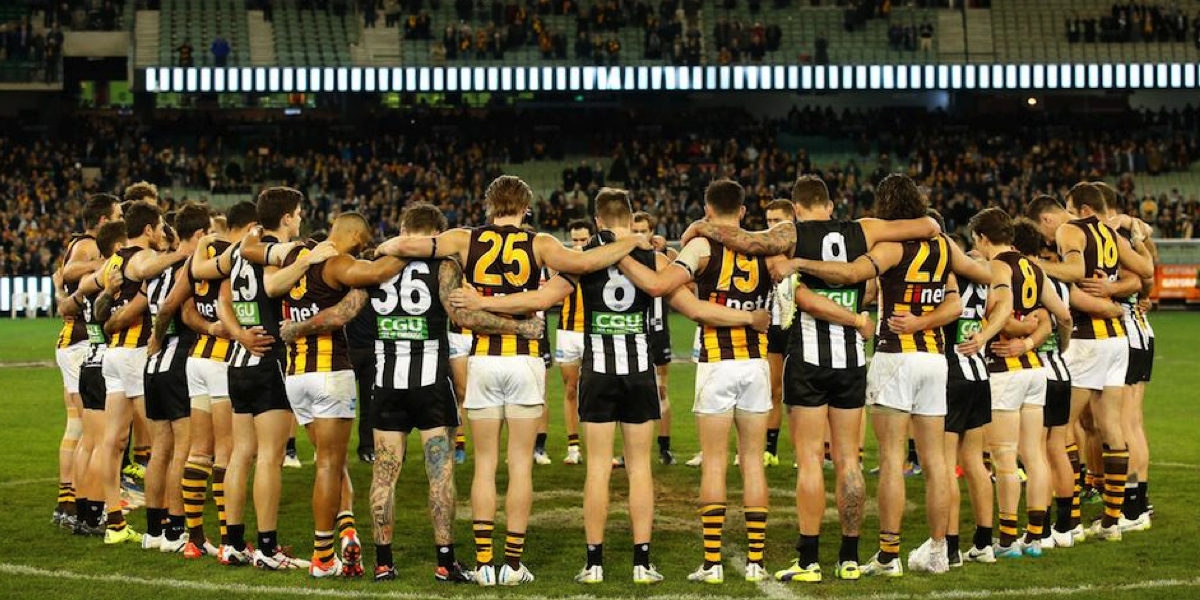 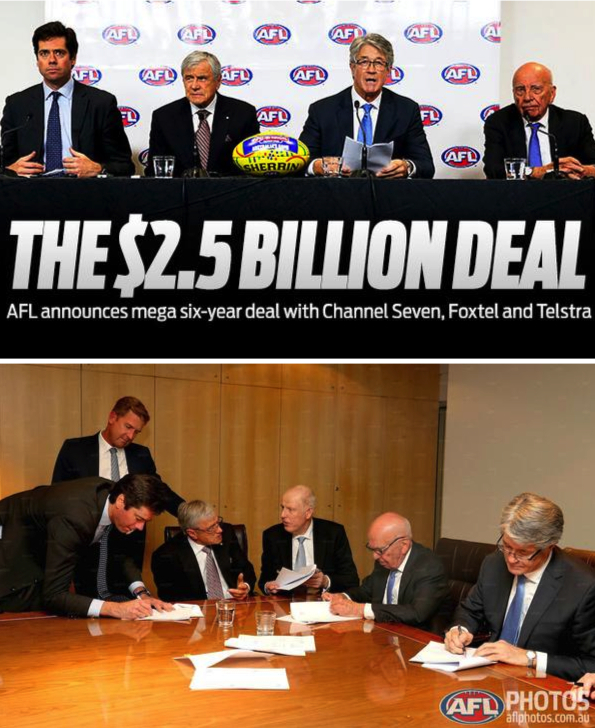 AFL has signed a $2.508bn agreement with Seven, Foxtel and Telstra for six years.

From 2017, Foxtel will air all games, except the grand final, live on paid TV. Seven will do the same on FTA TV and will also be the only place to watch the grand final. Meanwhile, Telstra will continue to hold the digital broadcast rights for the game.

•  Darren Davidson in The Australian

The Australian Football League has confirmed its status as the ­hottest commodity in sports broadcasting, signing a $2.508 billion TV rights deal to cement its position as the nation’s No 1 football code, reports The Australian‘s Darren Davidson.
After a week of tense negotiations, the AFL agreed to the richest sports deal in Australian television history with Fox Sports, the Seven Network and Telstra, extending the existing contracts held by all three broadcasters.
It is estimated that Seven will pay about $1bn, with News Corp contributing up to $1.2bn and ­Telstra spending between $250 million and $350m for the digital rights.

Incoming News Corp Australia chief Peter Tonagh has trumpeted a new era for the Australian Football League on the back of a record $2.508 billion TV rights deal, and warned rival code the National Rugby League that it could struggle to eclipse the jaw-dropping figure.
After kicking off informal talks a year ago, serious conversations began last week between Ton­agh, News Corp Australia chief Julian Clarke, global boss Robert Thomson and AFL chief Gillon McLachlan.
“It was a very condensed negotiating process,” Tonagh said. “It only started last week and normally you negotiate these things for months, which made it incredibly intense. These are complex agreements to complete and it went right down to the wire.”

•  Max Mason and John Stensholt in The AFR:

Rupert Murdoch has directly intervened and pushed the value of Australian Football League broadcast rights to unprecedented heights, agreeing for News Corporation to pay about $1.3 billion of a record $2.508 billion six-year deal the league has struck.
Telstra will pay about $300 million of the record deal over the six years, and broadcast AFL matches over its planned Telstra TV service and to handsets and digital devices, while Seven will pay $840 million in cash and $60 million in contra.

News Corp’s savage disappointment at being snubbed by NRL boss Dave Smith – the NRL removed Monday nights from Fox Sports from 2018 without negotiation – has provided a significant fillip for the Australian rules code, reports Caroline Wilson.
No bigger statement could have been made in response to the NRL than Rupert Murdoch’s decision to sit alongside the AFL bosses with his lieutenant Robert Thomson and state he preferred the AFL to the NRL.
Channel Nine, which last week floored industry observers when it announced it had secured the NRL free-to-air rights for five years for $925 million, remained a small but significant bidder until Monday when the AFL offered David Gyngell a new weekly Saturday afternoon fixture kicking off at 3.20pm.

Holden will on Wednesday sign one of the biggest sports club sponsorship deals in Australian sport with AFL team Collingwood, in an agreement understood to be worth more than $3 million annually.
The car giant will replace banking group Westpac as the naming rights sponsor for Collingwood’s training and administration facility near the Melbourne Cricket Ground and step up to be a top-tier premier partner.