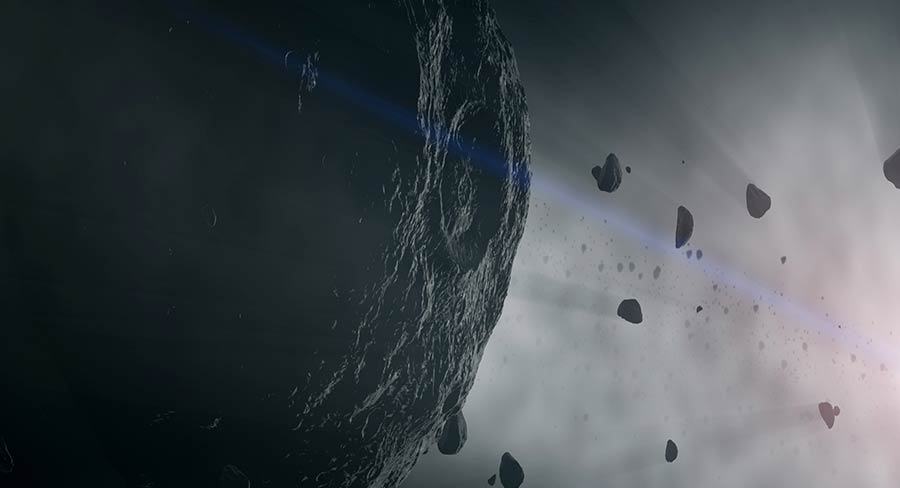 “It turned out pretty awesome.”

It has been a big month for Essential Media and Entertainment with the release of the feature documentary Living Universe in cinemas and an accompanying TV series on ABC, Search For Second Earth.

“I went to Cornell University to meet the space scientist who put the Rover on Mars and I asked him, if he had a show, what would he want it to be. The ideas in Living Universe were his and I have produced it.

“It had a long gestation – five years in financing with partners dropping in and dropping out. It ended up three years in production at a cost of about $7m.”

Hilton said about $1.3m of that went on CGI.

“It is a French-Australian co-production because they managed quite a bit of money for the CGI, which was done in France.”

Clearly proud of the final product, Hilton added: “It turned out pretty awesome.”

The official production credits list it as a co-production between Essential and ZED in France with co-production partner CuriosityStream.com in the US and financed with the assistance of Screen Australia, Create NSW, and Creative Europe – MEDIA Program of the European Union.

It is hoped the production will have wide appeal. “It is pitched at a general audience with the hope kids and parents might go together. It worked well in test screenings.”

Hilton called it “pretty nerdy” with a storyline that covers the search for life on other planets. “The people in Living Universe are like evangelists. Given there are trillions of stars in the universe it would be impossible that life doesn’t exist on another planet around another star.

Hilton is a believer that there must be life elsewhere after working on many science films over the years. However, he noted perhaps only be a robot could be sent on an inter-galactic mission.

“That means we have to look after this place even if we do find life on other planets because we won’t be able to get there very easily.”

Living Universe is narrated by Dr Karl Kruszelnicki for Australia, while the four-part Search For Second Earth documentary series launched on ABC last week in a Tuesday timeslot.

To follow next is a museum exhibition, a book and perhaps even an IMAX movie as Essential establishes the franchise.

In close to 12 months, the production house Essential Media and Entertainment has undergone massive change. First came the deal to sell the drama division to FremantleMedia and then Canada’s Kew Media Group took the rest.

“We have sold the company and I am an employee now for the first time in 35 years,” co-founder Chris Hilton told Mediaweek.

Hilton noted that in the production sector companies seem to have either to grow and become part of a large organisation, or prosper as a boutique business.

“The middle ground is under pressure and a hard place to be,” said Hilton.

“You need to find new ways to make shows cheaper because networks can’t afford them. Or go super premium in terms of casting, writing and production values.”

The acquisition was one of a number of recent acquisitions as Kew fast-tracks global growth.

The Kew Media Group founders were Steven Silver and Peter Sussman. Silver has a background in TV production. After selling his Blue Ice Group to eOne he worked for a time as head of factual for eOne. Sussman meanwhile is best-known as the producer behind the successful CSI television franchise, which he launched in partnership with CBS.

The sale to Kew Media frees up Hilton to do what he loves most – making the content. “You can spend a lot of time trying to finance projects. Now having an in-house distributor means it should be quicker getting projects from concept to completion. I can now concentrate on ideas and making the shows.”

“Greg Quail [who partnered with Essential in its US expansion] and I spend a lot of time in the US, which is a huge market for us. If you create a hit there, it is likely to last for longer.”

One of the biggest hits for Essential Quail Television is the Flip N Move franchise where the original version, Texas Flip N Move, is now into its 13th season with close to 200 hours.

Essential recently rebooted its drama division and has a number of scripted projects to take to market.

Hilton wasn’t able to share any details yet about what they might be, but we will watch the upfront season with interest to see if Essential is among the commissions.