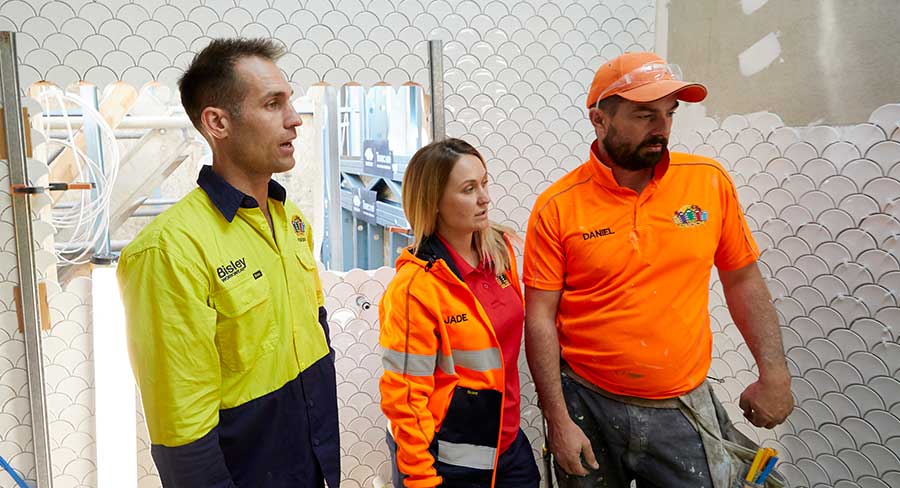 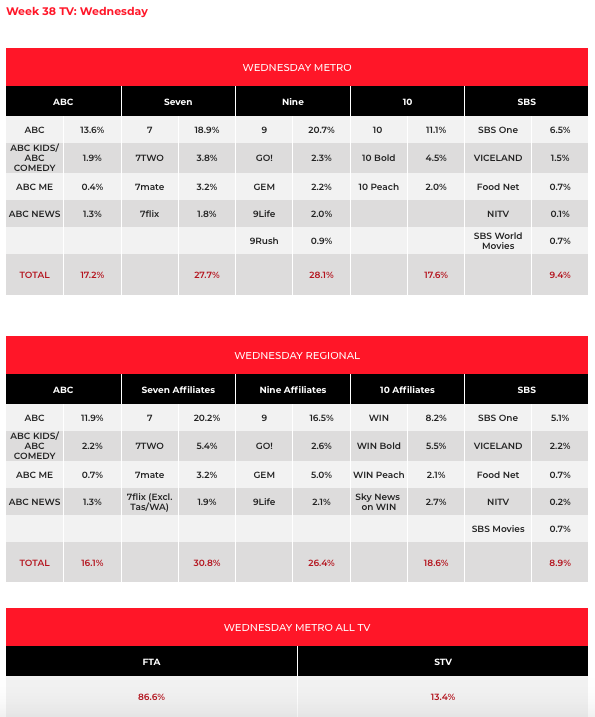 Seven: The network closed the gap a little in network share, but Nine stayed well ahead in primary share. Home and Away was just short of 600,000 for the third episode of the week. An hour of Highway Patrol followed with two episodes on 440,000 and then 407,000. Seven then went with a midweek movie, 2015’s Kingsman: The Secret Service, with 346,000 watching.

Nine: Nine has won the first four nights of the week in primary and network share. A Current Affair started with an extraordinary fallout between a customer concerned about his father and a Jewish Care aged care facility. The episode did 710,000.

The Block was back after the Domain game show Block It In on Tuesday which is a bit of midweek filler for a sponsor between work on the master bedroom and walk-in-robe. The Wednesday episode featured Scott and Shelley travelling around the hosts to try and motivate the other teams to tackle the competition front runners Jimmy and Tam. The audience of 687,000 was up a little on last week’s 651,000.

10: The Project started its hour on 344,000 and then climbed to 536,000 after 7pm. A busy episode covered the end of Keeping Up with the Kardashians and spoke to Mick Fanning and Kate Langbroek.

On the week’s first episode of The Bachelor Australia, virtual dating continued and Locky met five of the Bachelorette’s nearest and dearest via Skype, Juliette and Roxi’s relationship continued to suffer, and viewers were introduced to brand new Bachelorette, Bec.

With COVID-19 restrictions easing, host Osher announced that the women who receive a rose in the next Rose Ceremony can safely return to the mansion. He also invited Bella, Steph, Nicole and Roxi on a group date with Locky… and their loved ones.

ABC: 7.30 featured a look at Facebook and its threat to stop people being able to share news in Australia. Reporter Michael Vincent managed to find one news executive, Hal Crawford, who wasn’t blaming tech giants for the failure of the commercial news model: “It absolutely is not the fault of Facebook and Google. What’s responsible is the internet, the modern world. That is what has destroyed the business models of commercial media.” The episode did 571,000.

Hard Quiz featured another four contestants with quirky subjects, including one with a passion for Leeds United. The episode was on 682,000 after 672,000 a week ago.

The second episode of a repeat of season four of Utopia was on 362,000.

Planet America is just 54 days out from the US election with 322,000 watching John Barron and Chas Licciardello.

SBS: Part 2 of Arabia with Levis on Wood keeps Tony Robinson out of the midweek timeslot with 184,000 watching.