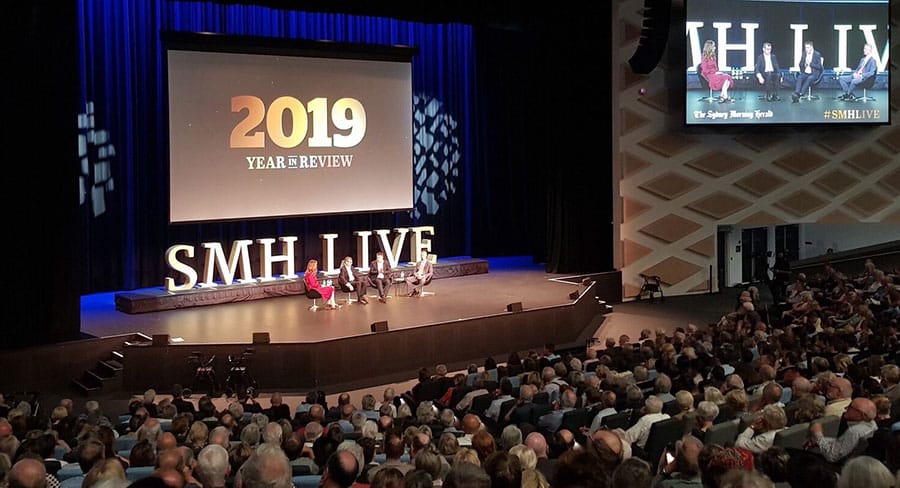 A live event for readers of The Sydney Morning Herald that features editors and journalists looking back at the year has become an annual event on the calendar. One that has continued under the new owners of the news brand, Nine Entertainment Co.

The hosts for the event were Sydney Morning Herald editor Lisa Davies and national editor of The SMH and The Age, Tory Maguire.

Running for a little over two hours, the guests only had time to skim over a few selected talking points across the year.

Much of the evening was taken up with talk about rugby union, and in particular the sins of Israel Folau. It was a fascinating discussion that was debated by Robinson and FitzSimons, but it ate up most of their time onstage and meant the state’s biggest sport, rugby league, didn’t get a mention.

Talking points that were discussed ranged from state and federal politics to corruption and the economy.
What the chosen reporters did show readers was that they are all as good onstage as they are on their keyboards.
It’s perhaps unfair to pick out favourites, but it would be hard to go past Georgina Robinson.

That’s no surprise though to people who have seen her other media appearances or to readers of her columns. But she was a delight onstage with the always entertaining FitzSimons. After one of his many throwaway lines (“There was once a great piece about that in the Herald…indeed I wrote it myself”), Robinson admonished the audience for still laughing at his jokes.

None of the contributors disappointed with Peter Hartcher commenting about climate change. After he pointed out what a month Sydney was having with fires, smoke haze and water restrictions, he commented, “Good job climate change is not real or we might be in trouble.”

When asked to mark the Federal Government on its year, Hartcher and colleague David Crowe ranked it C, while Ross Gittins was a little harsher with a D.

Alexandra Smith gave detailed insights into the challenges facing the state government and investigative reporters McClymont and McKenzie sparred about methods of research – the former likes snail mail for privacy, yet McKenzie much prefers encrypted digital messaging. McKenzie also teased a major investigation into Chinese influence in Australia the papers will be running this weekend.