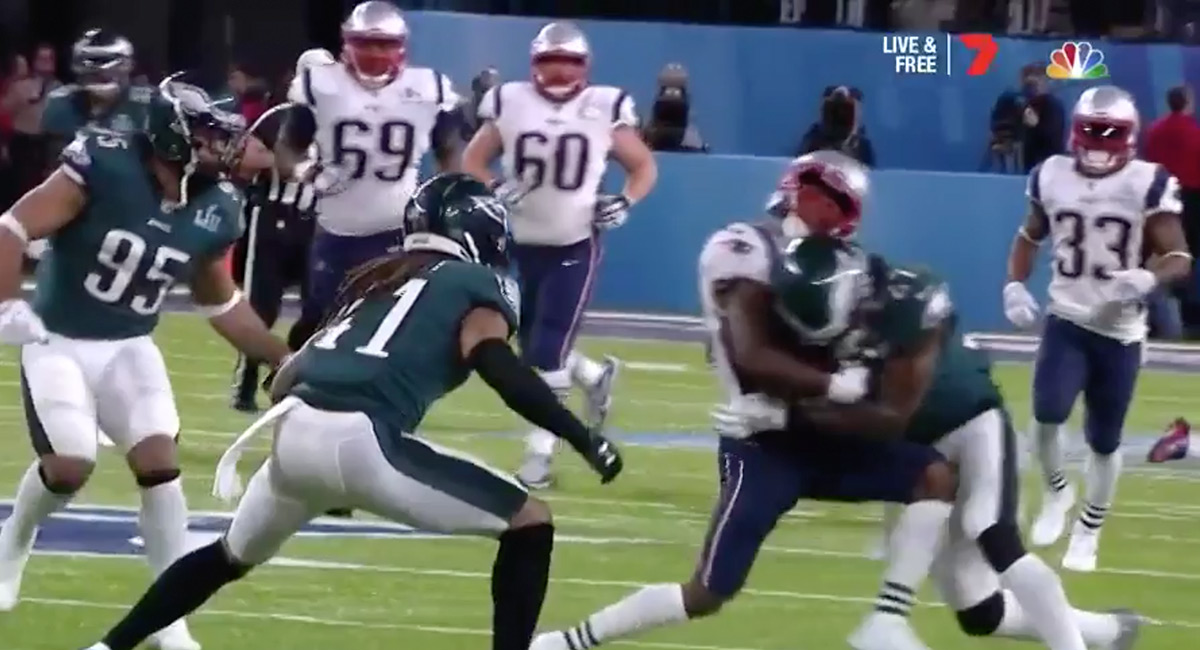 • But US audience still big enough for 2018 Super Bowl to make top 10 all-time US TV audiences
• Compare Seven’s Super Bowl year-on-year, How many listened to Whateley?

The Super Bowl clash between Philadelphia Eagles and the New England Patriots is being hailed as a classic contest… but it didn’t grow the TV audience.

With an audience over 100m in the US, it hardly seems to matter talking about the Australian audience where the numbers were again under 400,000.

The US clash between Philadelphia Eagles and the New England Patriots is being hailed as a classic contest… but it didn’t grow the TV audience.

In the US, NBC had 104m watching the match via traditional TV or online streaming, which is down 7% year-on-year. That makes the 2018 game the least-watched since 2009. It will of course remain the most-watched program on TV this year by a long way.

The audience was big enough, however, to qualify in the top 10 of all-time programs in the US, a list that includes nine Super Bowls and the farewell episode of M*A*S*H.

NBC added, the numbers released today do not include out-of-home viewers, which will not be available until Thursday from Nielsen. OOH will increase the audience measured by several million people.

One number that the host TV broadcaster, this year NBC, would be happy with is the number of commercial minutes in the game and the ad revenue sold.

US data analyst Kantar Media has released this summary of the ad spend (amounts in US$):

• Kantar Media’s preliminary estimate of in-game ad expenditures for Super Bowl LII, subject to revision, is $414 million. This would be the second-largest amount in history besides last year’s game, which was the first to run into overtime.

• There was a total of 49 minutes, 35 seconds of commercial time from paying sponsors, the NFL and NBC Universal networks. This matches the third-highest total on record. Ads accounted for 22% of the total broadcast.

• Anheuser-Busch InBev and Fiat Chrysler Automotive were the top advertisers in the game, each with 4:00 mm:ss of ad time. They were followed by Toyota Motor at 3:00 mm:ss and Amazon.com at 2:30 mm:ss.

• Auto manufacturers were the lead category during the game, accounting for 11 spots and 9:00 mm:ss of commercial time.

• There were only four first-time marketers during the game, the fewest in the past decade and less than one-half the number in each of the four preceding Super Bowl games.

The metro audience for the game in Australia on Seven this year is as follows (last year’s numbers in brackets):

We will never know how many listened to the first ever live Australian radio call of the Super Bowl by Gerard Whateley on 1116 SEN as GfK doesn’t measure single radio events.

We will get some detail of the average Whateley audience though in GfK survey one, 2018 in the first week of March.

Meantime Whateley hosted his Tuesday SEN program from Los Angeles on his way back to Australia. He will be next on air on Thursday from his new Melbourne home at SEN.