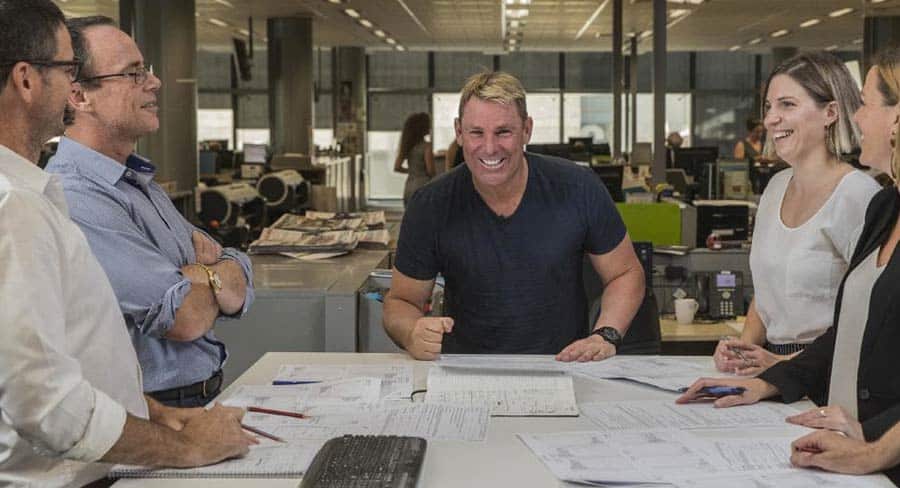 • Warne attended morning conference, pitched story ideas, had his say on others and penned an exclusive column

He’s arguably the greatest Test captain Australia never had but Shane Warne happily took charge of The Advertiser to edit Thursday’s edition of the paper on the eve of the first Test against India, reports News Corp’s Reece Homfray.

The second highest Test wicket-taker in history, Warne attended morning conference, pitched story ideas, had his say on others and penned an exclusive column on how the Aussies can topple Virat Kohli’s India at Adelaide Oval from Thursday.

“It was good fun, very similar to the set-up of a team and it’s a team effort to get the paper up,” Warne said.

“But at the end you’ve got to make some decisions and I actually really enjoyed it. It’s nice to see that side of things instead of waking up in the morning and seeing the paper and thinking ‘why would they put that story there?’”

Warne, a key member of the Fox Cricket commentary team, found himself on the front, back and inside pages of the papers throughout his career and was firm in his call for Adelaide boy Travis Head to be on Page 1, ahead of his first Test on home soil.

“It was a tough one between Virat Kohli and a local boy Travis Head, but it’s a good, positive story having him playing his first Test match in his home town in Adelaide,” he said.

Read the edition of The Advertiser editor by Warne here.