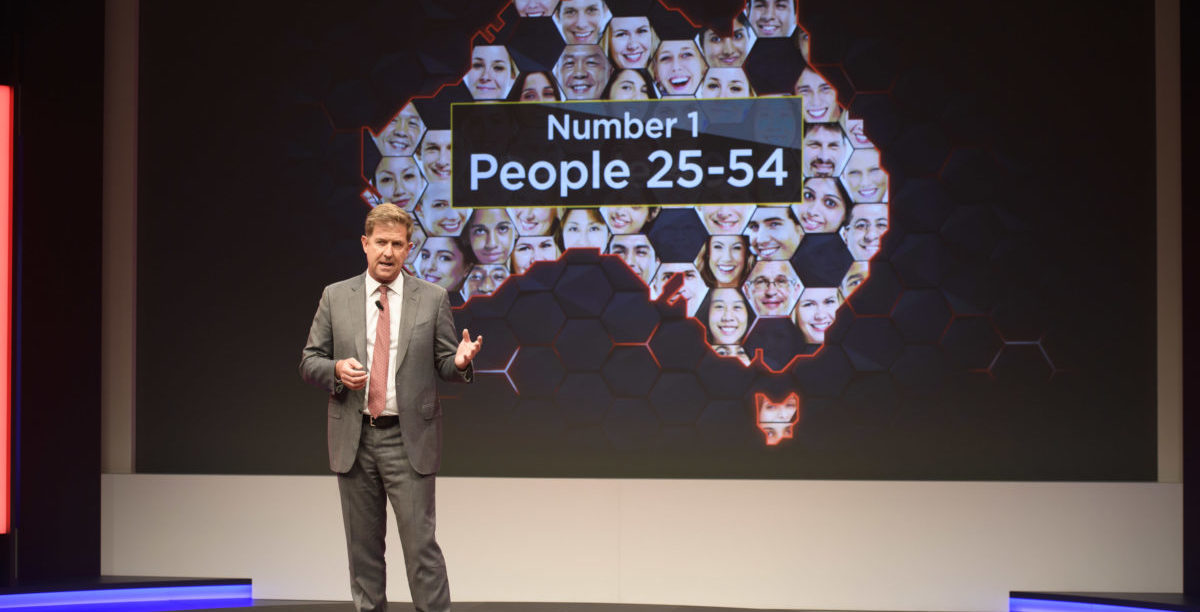 • Seven confirms expanded commitment to Australian television and delivery of content across devices
• Seven confirms major new Australian drama projects including major mini-series events
• Seven builds on leadership in content development and creation in Australia and international markets
• The Australian Open and My Kitchen Rules – Australia’s most-watched program – to launch 2017
• Seven to dominate major sports across 2017-2018
• Seven to deliver the Australian Football League, Rugby League World Cup, the Australian Open, the Melbourne Cup, the Olympic Winter Games and the Commonwealth Games
• The Seven Network has unveiled its plans for development over the coming 18 months.

Seven is the first of the three FTA commercial networks to hold its 2017 Upfront. Seven again held the event at its Everleigh studio facility and started off with a reminder of its consistent ratings performance:

Seven is number one for total viewers, 16-39s, 18-49s and 25-54s across the current television year. This is Seven’s 10th consecutive year of leadership – a performance underpinned by its commitment to the creation and development of Australian programming and a focus on delivering the biggest events to all Australians, any time and on your device.

Seven’s plans released today see the company build on this leadership with a string of renewals for major hit franchises and dramas and a portfolio of major sports events that will drive its audience delivery across 2017 and into 2018.

Seven sales executive Nikki Rooke was the first to take the stage to welcome guests in Sydney plus TV audiences watching a live feed at hosted events in Melbourne and Brisbane.

The event started at 5.45pm and ended close to an hour later, not counting some extra time spent listening to a sports Q&A and a quick wander around the My Kitchen Rules set.

Across the rest of the hour guests heard from Seven’s Tim Worner, Kurt Burnette, Bruce McAvaney and Adam Elliott.

This year was more about the content, despite not too many new shows, and a little less jargon about data and tech.

Live sport was the major theme to advertisers:

The Seven Network moves into 2017 with a new long-term partnership with the Australian Football League and a portfolio of major sports events across 2017-2018, including the AFL Grand Final, the Melbourne Cup, the Rugby League World Cup, the Australian Open, the XXIII Olympic Winter Games in PyeongChang in 2018 and the XXI Commonwealth Games on the Gold Coast in April 2018. Seven is also the network of the Games of the XXXII Olympiad in Tokyo in 2020.

Seven also unveiled key elements of a strong slate of new programs that builds on the network’s leadership across primetime. And beyond Seven’s commitment to broadcast television, the company also released plans for its further development in the delivery of its market-leading broadcast television, publishing and digital content to all Australians.

Commenting, Tim Worner, Seven West Media’s Chief Executive Officer and Managing Director, said: “We are about delivering the best to our audiences wherever they may be and on any screen. We are unleashing more live events – across sports and our primetime. We are commissioning great Australian dramas. Our track record of success over the past decade provides us with the confidence to expand and build our market-leading content and delivery presence across all screens.”

Commenting, Kurt Burnette, Seven West Media’s Chief Revenue Officer, said: “Our business is built on the very best and proven content for our audiences and delivering those audiences on every platform to our advertisers – all driven by the power and effectiveness of television and Seven West Media’s monthly audience of 17 million Australians. Our strategy of major events, key franchises and an expanding sports portfolio underlines our leadership and commitment to securing the biggest and most-engaged audiences advertisers are seeking.”