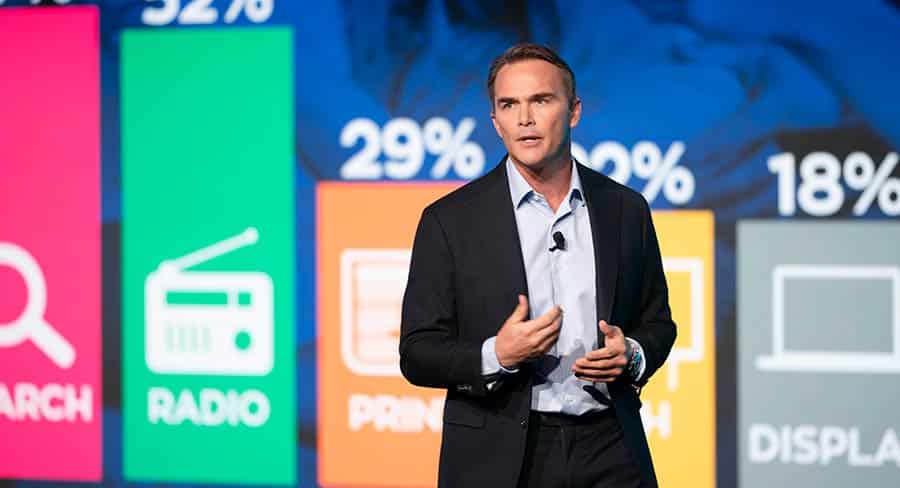 “I’ve been in television for 28 years and I’ve never seen an uptake as fast as what we saw with the cricket. “

Taking to the stage early during the Seven Allfronts in Sydney this year was Seven West Media chief commercial officer Kurt Burnette. As soon as his presentation had ended he talked to Mediaweek to expand on some of the key attractions for advertisers.

Did you debate for long on launching a food channel? It was a pretty easy decision in the end. It’s going to be launched at the start of the cricket in December so we’ve got really, really big opportunities for cross promotion. We will use the Melbourne Cup as a launch platform as well. We’ve been in market actually on the quiet for the last few days and I can say that it’s been somewhat of a feeding frenzy, to excuse the pun, for brands wanting to get involved. That’s a really good early sign.

Are you running a lower ad load at launch of Food Network?

We are and we are actually going to stay with less advertising. We’re going to greatly reduce the ad load and there are a number of reasons for that. One is for a better consumer experience, but it also means if you reduce the ad load, reduce the clutter, you get great cut-through for this channel in particular. We are doing a callout to creatives and advertisers who actually want to run longer creative. You can run a 60 or 90-second creative and actually do it not as a television commercial but as content in context. There is nothing better than that. Advertising in content is always better. We’ve done a lot of research with our sporting sponsorships and it comes up every time, if you have an ad in context around sports, it goes off the scale in terms of recall. If you do the same with this food channel, 60 or 90 seconds long-form creative inside food about food, it’s going do an amazing things for brands.

With Food Network you have a partnership with Discovery for lots of international content. Your library supplies lots of Seven Australian food content. Will you be commissioning any new Australian programming?

We’re going to have original commissions, not at launch, but certainly through the year, and again that’s going to be working with a lot of advertising partners. It’s about how can weave their brands inside content we can shoot together. When you think about the people we have on our network now, obviously it’d be no surprise to think that we’ll be working with them as well on creating new content. You started the year spending a lot of money on cricket rights. You have reported that getting the revenue back has started strongly.

I’ve been in television for 28 years and I’ve never seen an uptake as fast as what we saw with the cricket. We haven’t put out any press releases or shouted from the rooftops who our partners are, we just get on with it. Some of Australia’s biggest brands have seen what the cricket can do with The Big Bash League and test cricket on one network and they have invested in it. Our team has done an amazing job and the result shows the faith in the product we have been taking to market.

Have you beaten your cricket sales budget?

It has gone very well but there are lots of opportunities still left. We had a limit on sponsors and we didn’t expect to sell to the level we did – that sets a fantastic base. But we always leave something for those who want to come in short term because December is firing at the moment. It’s a very strong month, big retail month, so we need to have opportunities, and so that will certainly get us to budget, but it’s a very strong platform already.

You emphasised at the Allfront event your success with addressable TV. But you’re not the only one claiming to lead the market.

We were pioneers in the space. In fact we started with the tennis many years ago and we continue to be pioneers in that space. The point today is just that we’ve been doing it for a while and we’re accelerating it very quickly. We are the leaders in the amount of live streaming that’s being done and it’s going to be a very important part of it, our schedule going into next year, and it is a big part of television’s future.

You have some aggressive targets for growing your online audience?

We’ve grown actually 200% since we’ve launched 7plus eight months ago, so the fact is if we go again on that with our news service coming in Q1 next year, news and sports on the digital assets, plus the way BVOD is going, the new content we’ve got from Food to the Tour Down Under, and the digital assets we’re creating out of the cricket, means that target is doable.

Are you able to grow digital revenues as quickly as the audiences?

There is certainly an appetite from advertisers to be a part of it. Clients are asking for it – there is a huge, $3b market there to be had. The opportunity there is absolutely enormous, so can the revenue match the speed of the audience growth? Yes it can. We just have to make sure that people are aware of what we’re doing, how we’re doing it, and the performance of that, and events like our Seven Allfronts will certainly help that.